Global trade talks are going in the wrong direction, the European Union warned Friday, as it continued to exchange barbs with the United States amid fears that the WTO meeting could unravel. 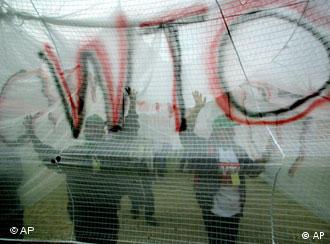 As trade ministers met for a fourth day in Hong Kong, EU Trade Commissioner Peter Mandelson reiterated he would not bow to demands from the US and developing countries to make deeper cuts in agriculture subsidies and tariffs.

He warned that if the EU's trade partners did not show flexibility, the Hong Kong meeting, tasked with preparing the ground for a global trade liberalization deal, could be headed towards failure.

"The emerging direction of the meeting is worrying," he said. "In the main trade-boosting areas of the discussions, the level of ambition, if anything, is going backwards. I do not want to contemplate a failure at Hong Kong. But equally I see no point in an outcome here that simply locks in low ambitions, diminishes benefits for developing countries and falls short of our responsibilities to the global economy. I would find it difficult to sign up to such a rolling-back of ambitions."

US trade officials meanwhile repeated their charge that it was the EU that had to move.

"The whole round is being held hostage by the failure ... of our major interlocutor to come up with ambitious offers on agriculture," a US official told reporters, without directly naming the EU.

Drive some further into poverty 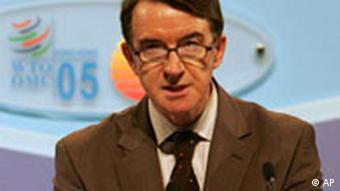 The EU and US exchanges came amid growing frustration at the lack of progress in the Doha round of talks which was launched in Qatar in 2001 with the aim of freeing up global trade and specifically helping developing countries. It is due to be completed by the end of 2006.

A major coalition of developing countries warned Friday it would reject any deal that harmed their interests.

"It appears that these talks will bring us nothing at all and even drive us further into poverty," Arvin Boolel, Mauritius' minister of agriculture and chairman of the 56-member Africa, Caribbean and Pacific group. "This situation makes a mockery of the development agenda of this round. We will not accept any agreement in Hong Kong that is made at our expense."

"There's too much attention being paid to other issues but the fact remains that poor countries need access to wealthy markets -- after all this is supposed to be a development round," he told AFP.

The official said there was still a belief the Hong Kong conference could end on Sunday with a positive outcome but he warned that it would take tough negotiation and more goodwill from all sides.

The G20 and the Cairns group of agricultural exporters, which Australia leads, pressed the same point, urging the EU and the United States to budge. 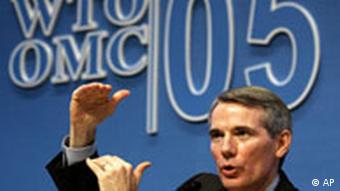 "Agriculture is at the center of this round and of the development dividends we seek from it," the two groups said in a statement. "Those most responsible for such distortions must now face the difficult political decisions to move the round forward. The dynamics of the negotiation require movements by both the EU and the USA. It is time for them to display leadership."

The talks in Hong Kong were supposed to sign off on the framework for an overall accord, allowing the negotiations to conclude next year on time, but now the most that is hoped for is some deal to help the poorest countries.

While the United States is pressing for a 55-90 percent cut in agricultural import tariffs, the European Union has offered reductions in a range of 35 to 60 percent.

On farm support, Washington has said it is prepared to cut trade-distorting subsidies by 60 percent over five years, matched by an EU offer to make a 70 percent reduction in such assistance.

At WTO, Security is Tight and Expectations Low

As the WTO talks opened in Hong Kong Tuesday, security was tight and key players, including Germany, had lowered their expectations. (Dec. 13, 2005)

Latin American nations on Wednesday called on a World Trade Organization conference to condemn the European Union's new tariff plan for bananas, saying it flies in the face of the rules of global commerce. (Dec. 14, 2005)

EU Hits Out at UN and USA Over Food Aid

A dispute between Washington and Brussels over food aid to poor countries intensified on Tuesday when the EU's trade chief accused the UN of backing American agricultural policies at the expense of the developing world. (Dec. 13, 2005)