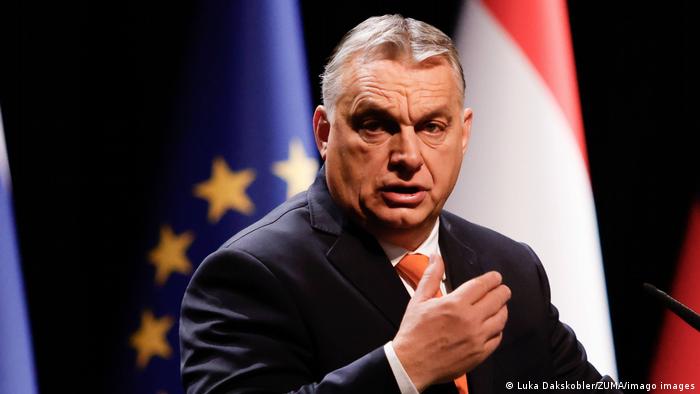 Hahn said the proposal is in response to allegations of corruption and rule of law violations against the government led by Viktor Orban.

"Today's decision is a clear demonstration of the Commission's resolve to protect the EU budget, and to use all tools at our disposal to ensure this important objective," said Hahn.

If the majority of EU member states back the proposal, the move will affect Hungary's so-called cohesion funds, which are intended to help bring the economies and infrastructure of EU countries up to the bloc's standards.

Hungary has until November 19 to address the EU's concerns.

Why is the EU recommending the suspension of funds?

The EU has long accused the conservative government of undermining democracy.  On Thursday, members of the European Parliament (MEPs) voted to condemn Hungary's slide into authoritarianism.

A Commission report published in July noted "an environment where risks of clientelism, favoritism and nepotism in high-level public administration remain unaddressed."

Sunday's proposal is the first such move under a mechanism that the EU introduced two years ago to tie its budget to basic democratic standards.

Democracies on the edge: What's behind the shift towards autocracy?

What has Hungary done to address the EU's concerns?

Hungary on Sunday pledged to meet all of its 17 commitments made to the European Commission in order to keep receiving EU funding.

Development Minister Tibor Navracsics, in charge of negotiations with the bloc, said he hoped Budapest's measures would be enough to convince the Commission that sufficient safeguards will be implemented to gain access to EU funds.

"Hungary did not make commitments to befuddle the Commission," Navracsics told a news conference. "We have made commitments that we know can be implemented ... therefore, we will not be facing a loss of funds."

Hahn said that the EU was recommending the suspension despite proposed measures by Budapest on Saturday to address Brussels' concerns.

Hungary said it would try to end the standoff with Brussels by passing a series of new anti-corruption laws within days.

The measures were expected to include establishing an independent anti-corruption watchdog to monitor the use of EU funds as well as steps to make the government procurement process more transparent.

"The government has either accepted the requests of the European Commission, or, in the areas where we could not accept them, we have managed to reach a compromise that is satisfactory to both parties," Orban's chief of staff, Gergely Gulyas, told a media briefing on Saturday.

The move to challenge the EU's rule of law compliance initiative, which ties its budget to basic democratic standards, will slow down its adoption by the bloc.