EU foreign ministers have issued a statement that describes the latest opposition coalition as "legitimate representatives of the aspirations of the Syrian people." Some had expected a clearer choice of words. 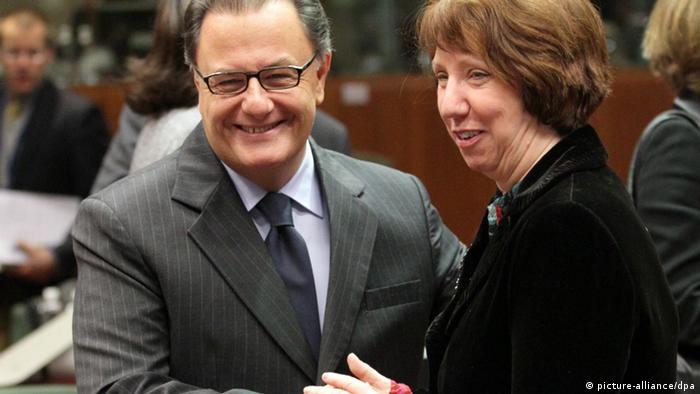 Foreign ministers from the European Union partially recognized Syria's new umbrella opposition coalition at a Brussels meeting on Monday, but stopped short of a previous move by France to effectively name the group government-in-waiting.

The recently formed National Coalition of Syrian Revolutionary and Opposition Forces was classified as representing the people's hopes, not the people, in what diplomats described as a compromise formulation.

"The EU considers them legitimate representatives of the aspirations of the Syrian people," the ministers wrote in their statement. "This agreement represents a major step towards the necessary unity of the Syrian opposition."

EU foreign policy chief Catherine Ashton (right in photo) said the bloc had settled upon a choice of words that it "felt extremely comfortable with."

"I wouldn't underestimate the strength of that wording," Ashton said. "Inclusivity is so important, that everyone in Syria can feel that the future belongs to them and that they have a place there."

France on its own

French Foreign Minister Laurent Fabius was pushing for full recognition of the opposition, after the government in Paris had described the new coalition as "the only representative of the Syrian people and therefore as the future provisional government of a democratic Syria."

The EU's choice of words was similar to that of US President Barack Obama, who had called the new opposition group "a legitimate representative" for the Syrian people, but not a government-in-waiting.

The ministers also stated an intention to boost humanitarian aid for refugees in Syria, pointing to "the deteriorating humanitarian situation and the approaching winter."

Another issue that divided the ministers was ending a Syrian arms embargo in order to supply rebel fighters with weaponry: a topic that was not discussed in the final statement.

"That's not a debate that's being conducted today," German Foreign Minister Guido Westerwelle said when asked about the prospect of arming the opposition fighters. "For now, what matters is that the unification of the opposition under a single platform proves itself to be long-lasting."

The formation of the National Coalition of Syrian Revolutionary and Opposition Forces came amid international pressure for dissident groups to demonstrate their ability to work together.