EU ministers seek to forge joint solution to refugee problem | Europe | News and current affairs from around the continent | DW | 21.09.2009

European Union interior minsters have met in Brussels to discuss a common approach to asylum policy and migration. Topping the agenda is a proposal by the EU commission on a joint resettlement program for refugees. 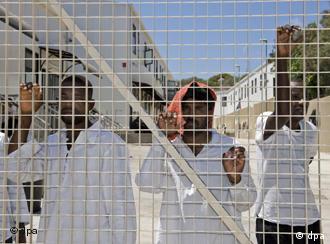 Italy's Lampedusa island has become a symbol of the 'Fortress Europe'

The EU commission's proposal on the "Joint EU Resettlement Program" is an attempt to fight illegal immigration by better coordinating laws and policies of the 27 member states. This comes amid growing European resentment towards immigration at a time of rising unemployment.

The aim of the joint strategy is to share the burden of the influx of African and other refugees, which currently falls heaviest on southern countries like Italy, Malta and Spain, where most illegal migrants arrive.

The meeting was chaired by Sweden's Migration Minister Tobias Billstroem, whose country currently holds the EU Presidency. On Monday ahead of the talks, Billstroem stressed that resettling refugees in the European Union can be a crucial step in fighting illegal immigration.

If a refugee stranded in Jordan had the chance to enter the EU legally, there would be no need for him to secretly cross the Mediterranean, Billstroem said. Jordan is for many migrants the starting point to illegally enter the EU in Cyprus.

Only last weekend, a boat with refugees trying to get from Morocco to a small Spanish island Pereijil capsized and dozens of African migrants are feared to be dead. Only 15 people were rescued while eight bodies were found by the Morrocon coast guard. According to the Spanish Red Cross, some 60 African migrants were crammed onto the inflatable dinghy when it sank. 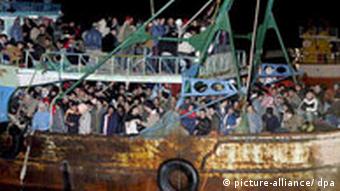 Enabling more refugees to enter the EU legally is also question of backing up Brussels' credibility on the international stage. A tightening of immigration rules over recent years has earned the EU a reputation as Fortress Europe.

"The current relatively low level of involvement of the EU in the resettlement of refugees impacts negatively on the ambition of the EU to play a prominent role in global humanitarian affairs and hence on the influence of the EU in international fora," the proposal by the EU commission says.

According to UN figures, European Union countries accepted 6.7 percent of the more than 65,000 refugees legally resettled worldwide in 2008. The UN estimates that in 2010 some 203,000 refugees will have to be resettled.

Disagreement across EU over treatment of refugees

The EU proposal isn't intended to not be mandatory, and it seems unlikely that the 27-nation bloc will arrive at quick agreement over the issue. Under the proposal, EU members would pledge annually how many people they would be ready to take in exchange for receiving EU funds to help with resettlement.

The ministers also discussed the treatment of refugees arriving in Italy and Greece. Rome has come under fire for tighening it's immigration policy and sending refugees straight back to Libya.

The UN High Commissioner for Refugees (UNHCR) has only recently condemned the state of a asylum camp on the Greek island of Lesbos. And earlier in September, Germany's constitutional court blocked the transfer of an Iraqi refugee to Greece saying the Greek asylum system was overburdened.