Migration into and out of the European continent has always been a touchy issue. Now EU ministers are calling on tougher rules, which discourage illegal immigrants while still encouraging skilled foreign labor. 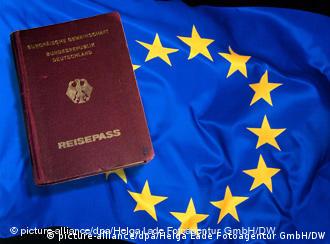 European Union ministers have called for a change to immigration rules

European Union justice ministers have announced that Europe should take complete control of migration into and out of the continent, working with the rest of the world to end illegal migration and manage legal flows. The news comes as EU ministers meet with their counterparts in the southern French beach resort of Cannes.

Monday's talks were set to be dominated by a proposal from the French government, which currently holds the EU's rotating presidency, to create a "pact on immigration and asylum" between the EU's 27 member states.

The pact, which would not be legally binding but would carry political weight, asks EU member states to strengthen the fight against illegal immigration, to crack down on the employers of illegal migrants and to live up to their responsibility to expel illegal residents from their territory.

At the same time, the pact urges EU members to put in place targeted immigration policies which would attract highly-qualified foreigners, in particular, to Europe. And it calls on the EU to work closely with countries of origin and transit, supporting development on their territories and making it easier for immigrants to send money home as a way of making it more attractive for potential migrants to stay at home. 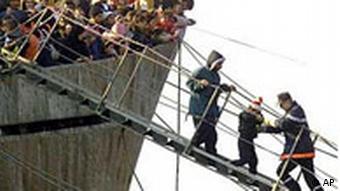 Thousands of people enter the EU illegally every year

However, a draft of the pact agreed immediately before the meeting tones down considerably the strong language used in the initial text. Where the first draft listed strengthened border control as its top priority, that was relegated to number three in later versions, being supplanted by the question of boosting legal migration.

The first draft also prioritized "organizing the effective removal of irregular residents from the EU" -- an emphasis which chimes in with the policy of France's President Nicolas Sarkozy, who has set annual quotas for expelling illegal immigrants.

But the later text used a much softer tone, calling for a general "fight against illegal immigration, especially assuring the return of foreigners who are in an irregular situation to their country of origin or a transit country."

The first draft of the pact also stated categorically that "massive and collective legalizations produce a major pull effect" and that member states "agree to give them up." But the latest draft simply calls on member states to limit their legalizations to a case-by-case system in the future. 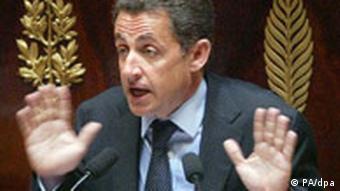 Sarkozy has been heavily criticized for his stance

While that compromise paves the way for broad EU acceptance of the text at a summit in October, the news on the domestic front was less promising for the French government in its immigration plans.

As the meeting opened, the French press reported that a commission of French experts formed by Sarkozy to discuss his migration policies had roundly criticized key points.

Binding immigration quotas would be "unrealistic and pointless," and the national authorities have "no discretionary power to determine the flow" of migrants into France, especially on family grounds, left-wing daily La Liberation quoted the report.

France to Push for Tougher Measures Against Illegal Immigrants

As part of its EU presidency, France is planning to present on Monday plans for combating illegal immigration in the 27-member-block despite criticism and accusations of xenophobia. (06.07.2008)

A new EU law that calls for the swift deportation of illegal immigrants has been loudly criticized by Latin America, which has threatened to halt trade talks as a result. (23.06.2008)

Germany has confused integration with assimilation for too long, says DW's Peter Philipp. Germans should stop expecting immigrants to become like them. (14.02.2008)