EU-Mercosur trade deal ′could be done by September′ | Business| Economy and finance news from a German perspective | DW | 20.07.2018

EU-Mercosur trade deal 'could be done by September'

Despite a raft of negative headlines on the trade front, the EU has been busy doing free trade deals with Canada, Japan and Mexico. A deal with South American bloc Mercosur may be next, with optimism on both sides. 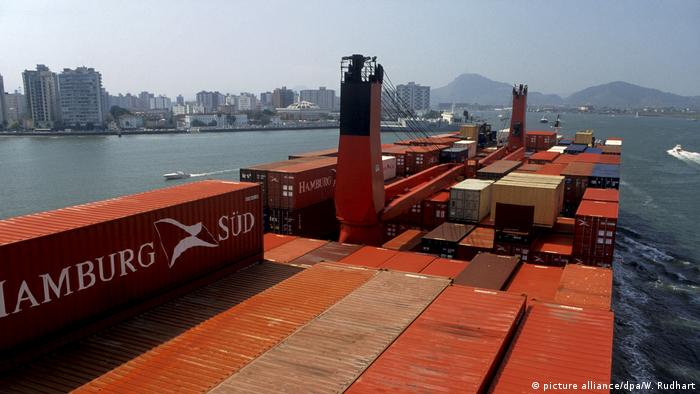 The EU and the South American trading bloc Mercosur are close to concluding a free trade deal that has been almost 20 years in the offing, according to Argentine Foreign Minister Jorge Faurie.

"We have achieved a sort of critical mass that will enable us to go to the closing game," Faurie told reporters following two days of talks between seven Mercosur ministers and EU Trade Commissioner Cecilia Malmstrom.

"The target is a good agreement that we consider that we will be arriving at more or less at the end of August, first part of September."

Malmstrom also sounded an optimistic note but she was non-committal on a date, citing previous roadblocks. "We are very close, but I don't want to give you a date because I did that before," she said.

Argentina, Brazil, Paraguay and Uruguay are the four full members of Mercosur. Venezuela has been suspended since December 2016 while Bolivia, Chile, Peru, Colombia, Ecuador and Suriname are associate countries of the bloc.

Despite the ongoing trade tensions with the USA and China, the EU has been busy negotiating free trade deals, having recently struck significant agreements with Japan and Mexico, as well as one with Canada in October 2016.

Should a deal with the Mercosur group eventually go through, it could result in major tariff reductions for the EU, with potential savings of three times the amount achieved in the Japan and Canada deals combined.

Of cattle and cars

However, progress has long since been slow, with significant reservations consistently apparent on the EU side. On a number of previous occasions, ministers and officials from Mercosur countries have said a deal was on the brink, only for progress to be delayed further.

The European side has been concerned over the possibility of a surge in beef imports, particularly within the French agricultural industry. The Mercosur side has also been hesitant about opening up some of its industries, especially the car industry, to European competition.

According to Faurie, fundamental progress has been made in areas of concern to the EU, such as on cars and the issue of "geographical indications" — namely the principle that certain names can only be applied to a product when it comes from a specific place.

However, a Brazilian official was less certain of progress, suggesting there was still a lack of commitment on the European side.

"The ministers should meet again in September in Montevideo. There is still time, but it would be the last chance this year and it will depend mostly on the Europeans' willingness to commit," the official said.

Back in March, when a deal had previously been anticipated, French Finance Minister Bruno Le Maire said negotiations were "blocked", adding that "you cannot explain to a producer that he has to stick to very constraining rules in Germany, France, Spain or Italy, and we'll (import) exactly the same good that will not be produced in the same manner on another continent."