Interior ministers of six EU nations are weighing the possiblity of an "integration contract" with immigrants as well as improving pan European collaboration in the fight against terrorism and illegal migration. 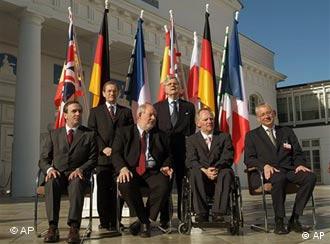 The ministers of Germany, Poland, France, Spain, Great Britain and Italy, meeting in the Baltic seaside resort of Heiligendamm on the north German coast, agreed to check the possibility of a European-wide test for foreigners seeking to become citizens in EU countries.

The EU ministers agreed that foreigners who wanted to become citizens of an EU-member state should be offered a contract fostering their integration by signing up to specific rights and obligations. The proposal which is now to be scrutinized by national governments is intended to complement citizenship tests already existing in a number of EU countries.

"We agree that experts from our countries must examine the option of presenting an integration contract to new immigrants," the interior minister of host country Germany, Wolfgang Schäuble, told a news conference.

Schäuble said the contract would inform new arrivals "of the rights and obligations relevant to the process of integration," after the so-called G6 meeting with his counterparts from Britain, France, Italy, Poland and Spain.

Foreigner test should not be seen as a threat

Schaüble said that the widespread use of such a contract in Europe should not be seen by foreigners as a "threat" but rather an attempt to show immigrants "that we are offering to integrate them" but that immigration must be a "reciprocal" process. 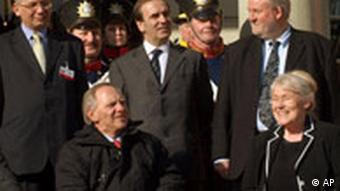 Suarez, center, spoke of the tragedy of human trafficking

The ministers also agreed to do more to improve relations with their countries' Muslim communities by comparing notes on "inter-cultural and inter-faith dialogue and cooperation with countries of origin", they wrote in a communiqué at the end of the two-day meeting.

The six countries also agreed to intensify cooperation to fight illegal immigration by stepping up coordination of security services. "With the support of EUROPOL, joint investigative teams are to be deployed to combat smuggling and trafficking of human beings or related crimes," the communiqué said.

"At the core of the problem is the fact that organized crime is heavily involved in illegal human trafficking," Wolfgang Schäuble told reporters. "We agreed that illegal immigration must be fought like other criminal acts carried out by these groups."

The Spanish interior minister Jose Antonio Alonso Suarez underlined that illegal immigration would eventually become a problem for the European Union as a whole. 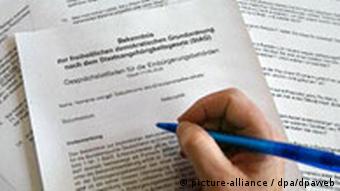 The maligned test, currently a topic of debate in Germany, may get a European roll-out

Although his country was one of those primarily affected by it, the effects of human trafficking would also have repercussions on other countries. He said that there was a human tragedy going on in the Mediterranean as thousands of Africans were seeking illegal entry into the union which could result in scores of people dying along the way.

On combating terrorism, they said they would share the task of analyzing Internet use by extremist groups, build joint support teams to assist a country in case of attack and start information visits at national counter-terrorism centers.

The ministers added that they would systematically exchange information on suspects expelled from G6 countries for preaching racial or religious hatred. 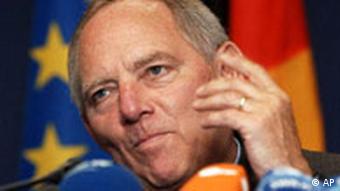 Schäuble pledged coordination in the struggle against terrorism

"On the proposal of our Spanish colleague and against the background of the terrible attack his country had to endure, we decided to set up pan-European support teams that will be deployed in such events. They will serve as liaison headquarters to coordinate relief efforts across the European Union," Germany’s Schäuble said.

The six ministers also said their cooperation was intended to forge a common European interior and security policy. This new level of collaboration would already become evident during this summer's soccer world cup in Germany.

The interior ministers said they would make a joint effort to prevent any outburst of hooligan violence by sharing police data and information well in advance of the championships.

With every new influx of refugees from Africa, the EU is under increased pressure. Help in containing the problem seems to follow swiftly, but mostly in the form of funding for increased policing and border security. (March 23, 2006)

Spain and France have announced that they will propose a joint plan for a European-African conference on immigration at a European Union summit later this month. (Oct. 18, 2005)