The European Union has just launched a new Eastern Partnership plan with six former Soviet states. However, Russia has already voiced its concern over the plan, which it sees as the EU encroaching on its territory. 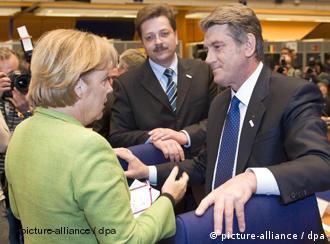 The plan was launched in the Czech capital Prague on Thursday after being signed by representatives of the EU, Belarus, Ukraine, Georgia, Moldova, Armenia and Azerbaijan.

The main goal of the partnership was to "accelerate political association and further economic integration" between the EU and the former Soviet nations, the participants said in an agreed summit statement.

German Chancellor Angela Merkel, the only Western European leader to attend the talks, said former Soviet states such as Armenia, Azerbaijan and Moldova must bury their differences and cooperate closely if they were to enjoy the benefits of the EU's partnership initiative.

The EU hopes that the partnership will help to stabilize the region by encouraging countries to work together and adopt democratic and free-market reforms. "Security and prosperity in Europe depend on the stability of the Eastern partners," Merkel said. 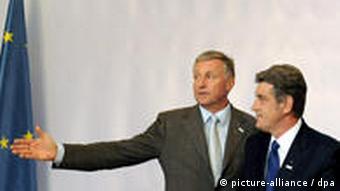 Petr Kratochvíl, from Prague's Institute of International Relations, said the partnership would be useful in several areas, including energy policy.

"If you plan a pipeline then you definitely need cooperation among a number of partner and member countries. The same applies to labor migration and other issues. It's a forum for discussion, for consultations, not only between the EU and the partners, but also among the partner countries," he said.

"Germany has very special relations with Russia, but also has an interest in a good neighborhood east of it is border" said Ivo Slosarcik, founder of the pro-EU think tank Europeum.

Slosarcik added that "Germany is known for using the enlargement of central Europe, for instance the accession of Poland, the Czech Republic, and Slovakia, as a tool of the stabilization for the region. Germany very clearly understands why the new member states are interested in the Eastern Partnership, and why it should be an EU priority."

Russia has voiced its opposition to the agreement, which it sees as an attempt to downgrade its influence in its own backyard. Russian Foreign Minister Sergei Lavrov warned on Wednesday against the creation of "new dividing lines" in Europe.

Entering the talks, she said "this is our common neighborhood, and I think both [the EU and Russia] should be very happy to have more stability.” 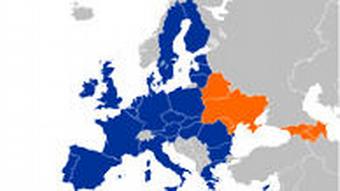 The "Eastern Partnership" is the brain child of Poland and Sweden

Ukraine's President Viktor Yushchenko called the Eastern Partnership "a first roadmap" for relations with Europe, but Ukraine has said it would be no substitute for its ultimate aim of joining the EU.

"There is a financial support from the EU and an understanding that there should be more cooperation with its neighbors," he said.