EU leaders are torn between options to save member states' economies from the fallout of the pandemic. Eurogroup chief Mario Centeno said he is committed to a robust recovery plan. 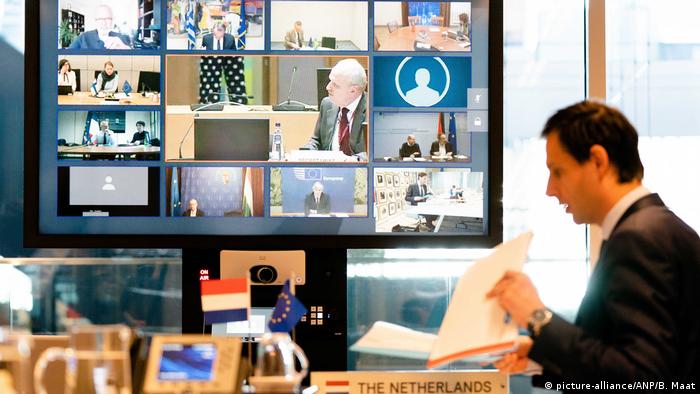 "After 16h of discussions we came close to a deal but we are not there yet," Centeno said. "I suspended the Eurogroup and [will] continue tomorrow, Thursday. My goal remains: A strong EU safety net against fallout of COVID-19 … and commitment to a sizeable recovery plan."

Disagreements between Italy and the Netherlands over the conditions of eurozone loans have effectively blocked agreement over a way forward, diplomatic sources told Reuters news agency.

"The Italians want a reference to debt mutalization as a possible recovery instrument to be analyzed more in the future," the source said. "The Dutch say 'no'."

Eurozone countries are largely split along a north-south divide. Italy and Spain have spearheaded efforts to collectively guarantee debt within the eurozone in the form of so-called coronabonds. But that proposal, which could easily raise hundreds of billions of euros, has been outright rejected by Germany and the Netherlands.

Read more: ESM, Coronabonds or 'Marshall Plan:' How the EU could manage the Coronavirus fallout

Instead, Germany — Europe's economic powerhouse — has proposed using the crisis instrument known as the European Stability Mechanism (ESM) to extend credit to hard-hit countries. However, since its inception, the ESM has required hard commitments to extensive economic and financial reform. Although the German government has called for easing those conditions, it is unclear how far they're willing to go.

German Finance Minister Olaf Scholz urged eurozone countries to put aside differences and accept a compromise deal. Reports suggest that key member states, including Germany, France and Spain, had agreed to a compromise deal overnight, but it was rejected by Italy and the Netherlands.

"Together with French Finance Minister Bruno Le Maire, I call on all eurozone countries not to refuse to solve these difficult financial questions and to enable a good compromise for all citizens," Scholz said.

EU finance ministers will again reconvene on Thursday to continue negotiations on a recovery package.

Germany's foreign and finance ministers have called for tweaking the European Stability Mechanism to support eurozone economies devastated by the pandemic. They propose freeing up billions of euros for Italy and Spain. (06.04.2020)

The head of the European Commission, Ursula von der Leyen, has urged huge investments in the EU budget amid the coronavirus crisis. Spain's premier, too, wants a "wartime economy" followed by a recovery program. (05.04.2020)