EU criticizes violence against Maidan protesters | Europe| News and current affairs from around the continent | DW | 11.12.2013

While the EU's foreign policy chief continued a trip to Kyiv, Brussels rejected the Ukrainian government's call for 20 billion euros. The EU said it would not engage in a bidding war for closer ties to the country. 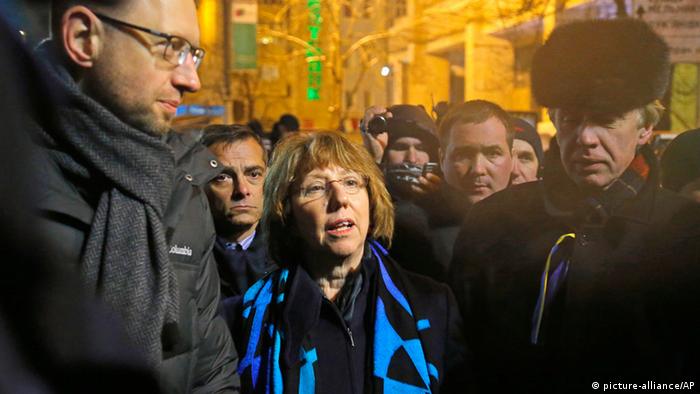 Ashton addressed the protesters directly. "I was among you on Maidan in the evening and was impressed by the determination of Ukrainians demonstrating for the European perspective of their country," she wrote in a statement.

On Tuesday night, the EU foreign policy chief pulled up on the side of Maidan, which has been occupied by thousands of protesters then walked across the square, which was surrounded by journalists and bodyguards. "She was greeted like a rock star," an observer tweeted.

Several hours after her appearance, violent assaults occurred on the square. The police allegedly beat up protesters and students in an attempt to dismantle the barricades demonstrators set up on the square.

"The authorities did not need to act under the coverage of night to engage with society by using force," Ashton said in a statement. "Dialogue with political forces and society and the use of arguments is always better than the argument of force."

The spokesperson for the EU Commission, Olivier Bailly, said in Brussels that Ashton was "extremely disappointed after having witnessed the use of force against protesters," and that it came just hours after her discussion with Yanukovych.

On Wednesday evening, Yanukovych invited political, religious and civil society leaders to take part in a national dialogue. There were, however, no details concerning where or when such a dialogue would take place. Demonstrators have said they will not stop their protests until Yanukovych resigns. 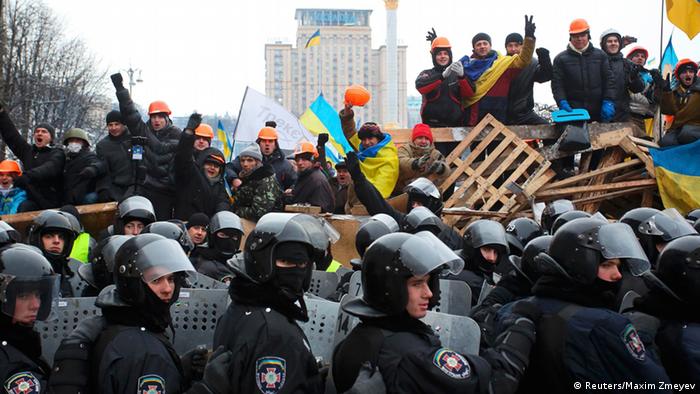 In the early hours of Wendesday (11.12.2013) Ashton met with the three Ukrainian opposition leaders, amongst them Vitali Klitschko, in the union building, which has been occupied by protesters.

Before the meeting, Klitschko called for Yanukovych's resignation. "There can't be any compromises with dictators and cutthroats," Klitschko said, according to reports from news agencies. "You have to get rid off them."

Yanukovych had taken more than three hours of his time to talk to EU foreign policy chief Ashton on Tuesday. He welcomed her with a smile and a friendly handshake. Results of this meeting are yet to be made public. All Ashton said afterwards was: "We talked about everything that's important."

Before the crisis meeting with Ashton, Yanukovych announced his willingness to continue negotiations about an EU association agreement on Ukrainian TV. According to him a signing of the agreement could happen at the next EU summit in spring if the financial conditions were to be improved for the Ukraine. 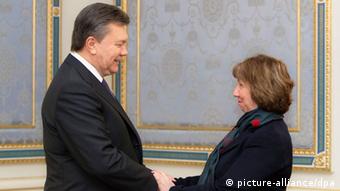 Talk to be continued: Ashton wants to meet Yanukovych again

Ukraine's Prime Minister Mykola Azarov specified these requirements on Wednesday. He said Ukraine wanted a credit of 20 billion euros ($27.5 billion) from the European Union in order for them to sign a partnership agreement.

"We're not going to play with figures and have an escalation of figures," Bailly said. "We think that Ukrainian prosperity and Ukraine's future cannot be subject of the call of tender where the highest bidder will get the prize."

Yanukovych allegedly received a loan limit of 20 billion euros after negotiations with Russian President Vladimir Putin, who would like to see Ukraine join a customs union with Russia.

Opinion: The EU is embarrassing itself in Ukraine

Ukrainian President Yanukovych seems to be able to do whatever he wants without fear of consequences from the European Union. This passiveness on the part of the EU has to stop, says DW's Christoph Hasselbach. (11.12.2013)

Most of the speakers in the European parliament's Ukraine debate called for solidarity with the pro-European demonstrators. They're hoping for a peaceful solution - and had severe criticism for Russia. (11.12.2013)