EU budget chief Günther Oettinger says he wants Berlin to pay at least 3 billion euros more to cope with new tasks after Britain leaves the bloc. But he said that meant just 10 cents a day more for everyone in Germany. 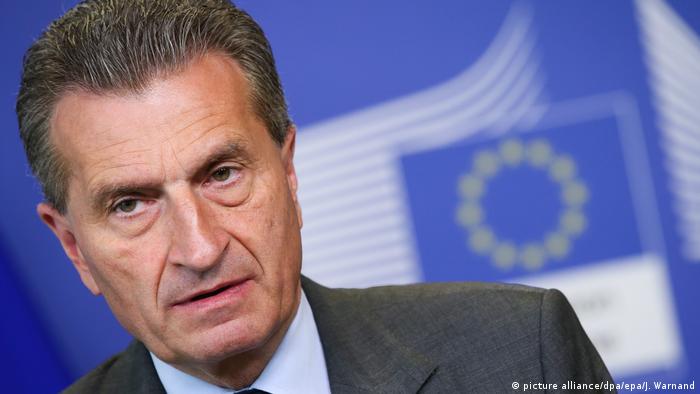 Germany will be expected to contribute about €3 billion to 3.5 billion ($3.76 billion to 4.4 billion) more to the EU than it does now to help meet new challenges facing Europe, European Union Budget Commissioner Günter Oettinger said in remarks published Friday.

"With 3 or 3.5 billion euros more from Germany, we could close the gap left by Brexit and finance additional measures," Oettinger told the Bild newspaper. He cited the protection of the EU's external borders and the fight against terrorism as being among the new challenges facing the bloc.

"That would be about 10 cents per day more than now per head," he said.

Oettinger also rejected any idea that the EU could abandon its current austerity course.

"On the contrary: We have to compensate for about half of the gap of €12 billion to 14 billion left by Brexit with cuts in the existing budget," he said, adding that there would be no change in the EU's debt-free budgetary policy.

Angela Merkel's conservatives and the Social Democrats (SPD) have agreed in coalition talks that Germany would be ready to pay more to the EU under a new government. However, the coalition deal is still to be voted upon by SPD members, who will decide whether the grand coalition government is established.

Germany is the biggest net contributor to the EU. In 2016, it paid €12.9 billion more into the EU budget than it received back in EU funding.

Voter support for Germany's Social Democratic Party has plunged to a record low of 16 percent, according to a new poll. It comes after leader Martin Schulz resigned amid a leadership crisis. (16.02.2018)