EU countries voted to back a plan to impose a carbon dioxide tariff on imports into the 27-nation bloc. Forthcoming negotiations are set to hammer out the precise details. 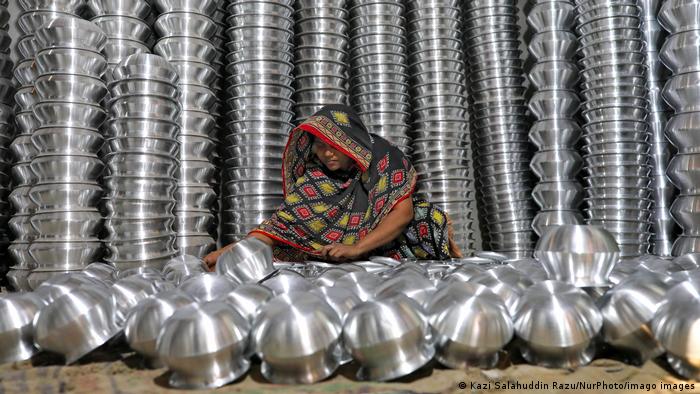 Aluminum imports are among the imports that would be taxed coming into the EU to offsett carbon emissions.

On Tuesday, the EU backed a plan to levy a carbon emissions tariff on the importation of goods that create environmental damage during their production.

The exact details of the carbon tax plan will be worked out during forthcoming talks.

The EU hopes to introduce the tax on aluminum, cement, electricity, fertilizer and steel.

In part the move is also protectionist to shelter Europe's industry from deflationary pressures resulting from competition with cheaper goods made overseas where labor and environmental conditions are less.

What is the EU's plan?

The European Commission proposes 2026 as the date for when the carbon tariff would be introduced.

The EU would like to begin a transition period next year.

EU nations and the European Parliament are hoping to approve the final rules on the tax ahead of the anticipated transition.

By summer the European Parliament anticipates a framework that could give way to the final rules being hammered out by fall.

The new proposed tax is part of the EU's climate change policies which are designed to cut the EU's greenhouse gas emissions by more than half by 2030 compared to 1990 levels.

What have EU leaders said about the proposed tariff?

France currently holds the EU presidency and chairs ministerial meetings. Paris champions the effort to tax carbon emissions outside the EU on products that are destined for EU consumers.

After EU finance ministers met and agreed to kick off negotiations Tuesday in Brussels, French Finance Minister Bruno Le Maire said: "It's a major step forward in the fight against climate change."

Germany's finance minister, Christian Lindner, said: "We must maintain the competitiveness of our economy in Europe."

What obstacles are there to a new EU green tax?

Europe's green goals will require huge investments. Green technologies like hydrogen and taxes are the ways the EU has outlined to meet its aspirations.

CO2 permits have been used to keep EU industries competitive, though there is an effort to phase those out.

There are also concerns about industries fleeing for countries with lighter regulatory regimens.