Ethiopian journalist: 'I was jailed and tortured'

He is one of Ethiopia's most critical journalists. Muluken Tesfaw is in Europe and too scared to return. He doesn't want to share his location, but talked to DW about press freedom declining dramatically in his country. 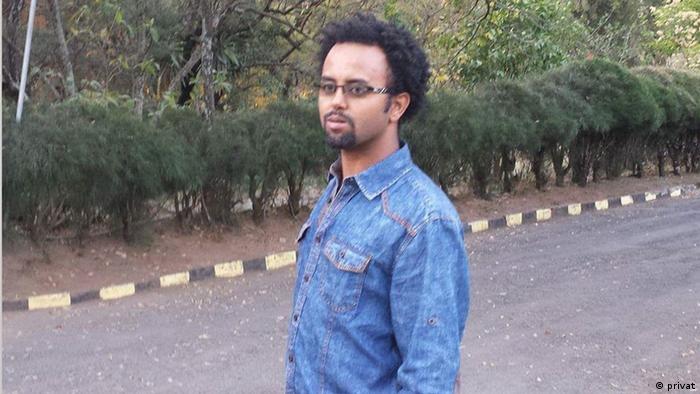 According to a report by the Committee to Protect Journalists (CPJ), released late last year, the number of journalists imprisoned in Iran, Vietnam, and Ethiopia increased in 2015. The report said that in all three countries a climate of fear for the media persists, with many of those released continuing to face legal charges or harsh restrictions, including forced exile.

DW: Why did you flee your country?

Muluken Tesfaw: I just came to Europe, because I wanted to participate in the World Press Freedom Day celebrations on May 3rd in Helsinki. I was representing journalists from my country there.

After that, I got many messages from family members and friends. They strictly warned me not to come back to Ethiopia. They said, they were questioned by different security officers and unknown people, and the manager of my newspaper was also held by police in the eastern part of Addis Ababa. And, for many other reasons that I can't talk about now, I am obliged to ask for asylum and legal protection, here where I am.

As a journalist, what did you have to go through back in your home country?

I tried my best for the development of a free press in Ethiopia. Since 2012, I have worked as a columnist, reporter, editor and editor-in-chief in different newspapers like Ethio-Mihdar and Yekelem Qend and I've been featured on many other websites. While doing my job, I was jailed and tortured in 2012. And last year during the elections, security officers followed me.

Whenever I went to my home or came out, there were people around - that's why I had to hide in a monastery near Lake Tana. I was in hiding there for about two weeks. After the elections I returned to Addis. Since then I got a lot of intimidating phone calls and I was also physically attacked. I reported these intimidations to the human rights council and wrote about it in social media and in the newspaper. In my articles, I always speak about human rights violations, press freedom and so forth. I highly criticized the regime.

What does that mean for your fellow journalists back in Ethiopia, what can you tell us about their situation?

Frankly speaking the press environment there is locked. Last year alone, more than 20 journalists and activists were forced into exile. Dozens of newspapers and magazines were forced to close down by the regime. The government might give you a license, but after you have it, there is no fertile ground towork with the license. I think the international community can understand that the press environment in Ethiopia is much more in danger than ever.

Why do you think is the government so sensitive to some of the news coverage that you do?

I just try to investigate facts, but there are still so many challenges. The government is totally autocratic. In a totalitarian government like in Ethiopia, it's the nature of such regimes to be prohibitive. Sometimes they want to be seen by foreigners as being more democratic and liberal, but practically they are very autocratic. That's the nature and behavior of the Ethiopian regime.

Every month as many as 5,000 people flee Eritrea, a country ruled by an authoritarian regime in which human rights violations are widespread. Oliver Ramme has just returned from a rare visit to the African nation. (15.04.2016)

Quiet diplomacy with Ethiopia is not very effective, HRW says

After talks with US President Barack Obama, Ethiopian Prime Minister Hailemariam Desalegn has insisted the government's commitment to democracy is real. But the facts speak for themselves, says HRW's Leslie Lefkow. (27.07.2015)