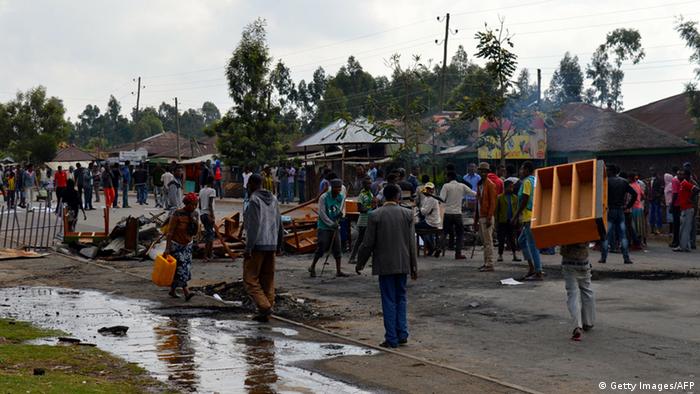 The Ethiopian government has rejected requests by the United Nations and the European Union to investigate months of anti-government protests that left hundreds dead. Prime Minister Hailemariam Desalegn said not allowing an outside investigation was an issue of sovereignty.

Ethiopia's Human Rights Commission has said at least 669 people were killed during the protests that began in November 2015 and led to the country's current state of emergency. Its report puts the blame for the unrest largely on opposition groups and foreign media and says security forces used "proportionate measures" to counter it.

Zeid Ra'ad Al Hussein, the United Nations High Commissioner for Human Rights, who visited Ethiopia this week, told DW in an exclusive interview he would push the government to allow his agency to investigate rights abuses.

DW: What is your general take on Ethiopia after your visit?

Zeid Ra'ad Al Hussein: It's clear to me, as to many others, that in terms of economics, social and cultural rights, there have been advances. Where the deficit remains is clearly with regard to the need to open up civic space, the need to have more latitude for free media, the need to assure that the human rights commission enjoys deep independence. 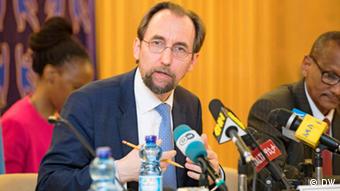 We had an intense discussion with all the stakeholders, the members of the government and representatives of various political parties. I witnessed a very intense engagement between the political parties. I visited a detention facility, where I met with an emblematic detainee who is very well-known in the country. We had a long discussion about Ethiopia.

So I come away believing that Ethiopia is at a critical point. I see that it needs to now deepen its work on human rights, and it certainly needs to invest more on the civil and political side.

The local media reported that you met up with Bekele Gerba or Merera Gudina [deputy chair and chair of the Oromo Federalist Congress respectively]. What did you discuss with them and what did you make of the discussions?

I asked the people I spoke to the question: How did they see the situation in Ethiopia today? And what advice would they give to me? I also asked the same question to the civil society activists that I met privately as well as publicly in large groups. We basically wanted to hear the complete range of views to assess what needs to be done.

There were many issues surrounding the request we made for access to Oromia and Amhara [the locations of the protests] so we could assess what exactly happened there. As I said in the press conference, I renewed my request for authorization to send my teams there to properly understand what happened there from all perspectives.

I also made it clear to the authorities that I couldn't endorse the report or corroborate their views because I had no independent means of verifying what they were saying. That's why we made the request again.

Can you confirm the names of the people you met in prison?

I can't confirm [names of] the detainees I met because I need their informed and prior consent. It wouldn't be right for me to disclose their identities. But all of the discussions have been very rich, so I believe that Ethiopia is at a pivotal point.

You've also mentioned the protests that took place in Oromia and Amhara and the government's announcement of a state of emergency, which has been extended for three months. As a commissioner of human rights, how would you assess the situation in the country from the outside?

We can verify the issues only when we have access to these areas. What we are going to do now is take the second report of the human rights commission and read it carefully. I am hoping to come back here, probably in January, and I will assess progress. Hopefully, by that stage, we will have been given access, and we will see whether we can encourage the government to open up the stage for civil society, for independent media and for us as well. 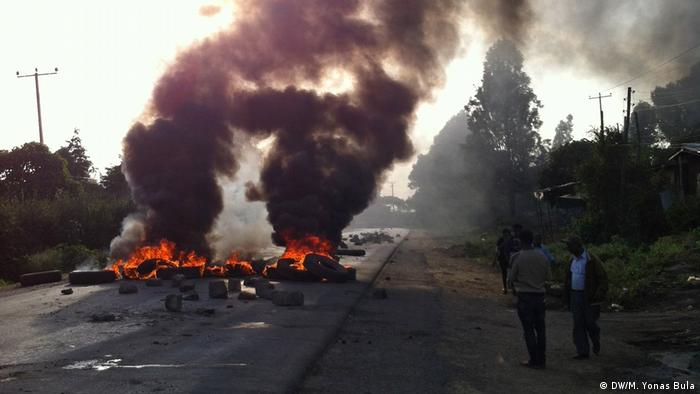 Six hundred plus people were killed during the protests, and the government said in the report that its actions were a proportionate response. What do you think of this statement by the government?

I haven't read the report yet; we just saw the numbers. The numbers indicated that there were genuine frustrations, genuine grievances. It says that things were not going right, of course. But we'll have to look at the report and hope that we have access again so that we can talk to people, talk to families, talk to those who were directly involved, and then form our own picture and analysis of things.

I am hoping they [the government] will give us access, and my sense is that just inviting me to Addis Ababa means the mood is changing. Let's hope it's for the better for all the people of Ethiopia.

What's your next move from here?

We've listened very carefully to civil society groups and their representatives, as well as to the government. I am leaving with the feeling that there is work to be done, and I hope that we will be able to help the people of Ethiopia achieve all the human rights they deserve.

Four months after declaring a state of emergency in a crackdown on protests, Ethiopia's government claims the country has returned to normal. Critics says the emergency decree remains an instrument of repression. (10.02.2017)

The Ethiopian government has been trumping the country's recent economic success. But a new plan to employ young people appears to be more about quelling protests than providing employment. (21.02.2017)

There was much excitement in Africa when Barack Obama was elected US president in 2008. But he didn't live up to many expectations. Daniel Pelz recounts the legacy of the first US president with African roots. (16.01.2017)

The Ethiopian diaspora in the US has assumed a significant role in politics back home and are shaping political debate through social media and satellite television. (10.12.2016)

The East African Court of Justice has rejected a petition by the Maasai community in a case involving a land dispute between them and the Tanzanian government. The land is located in the famous Serengeti.