Hunger and disease have killed 85,000 children under the age of five in Yemen since 2015, according to Save the Children. Its estimate coincides with a UN envoy's visit to Sanaa as the warring parties prepare for talks. 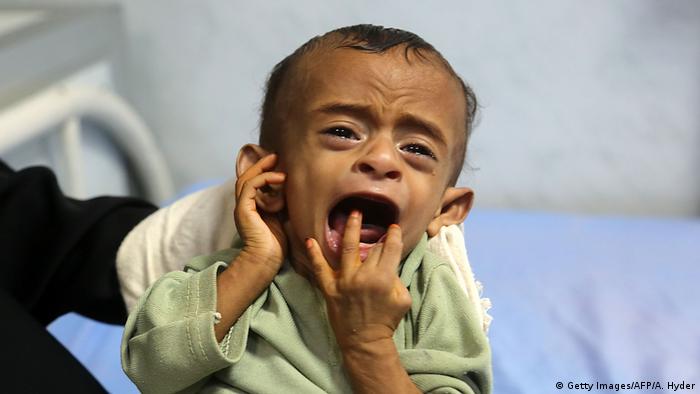 Humanitarian organization Save the Children estimates 85,000 children under five years of age have died in Yemen since the war started, its representatives said.

The group said its figures were based on historically verified mortality rates for untreated cases of Severe Acute Malnutrition or SAM. These show that up to 30 percent of under-5's die if their malnutrition is neglected.

"For every child killed by bombs and bullets, dozens are starving to death and it's entirely preventable," said the charity's Yemen director Tamer Kirolos. "Children who die in this way suffer immensely as their vital organ functions slow down and eventually stop."

The UN did not provide a malnutrition death toll in Yemen, but its officials say

300,000 under-5's are at risk of dyingin what the UN considers the world's worst humanitarian crisis.

Last month, the UN's World Food Program warned that the proxy war between Saudi Arabia and Iran had already put 8 million — over half of Yemen's 14 million people — on the brink of famine.

A Saudi-led coalition intervened in Yemen in March 2015 in a bid to restore a government that had been ousted by ethnic Houthi rebels in 2014. 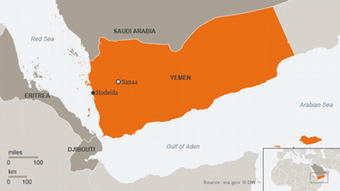 The fighting is currenly focused on the main port city of Hodeida, a supply line for the Iran-aligned rebels on Yemen's western Red Sea coast.

The Saudi-led blockade was tightened a year ago.

Aid groups have warned that an all-out assault on the port city would endanger 80 percent of Yemen's humanitarian aid, including food imports.

Hodeida has seen shelling by pro-government and Houthi militias in recent days after the rebels declared a halt to missile and drone attacks on the Saudi-led coalition that includes United Arab Emirates forces. After talks with rebel leader Abdel Malek al-Houthi, Griffiths was expected to travel on to Hodeida on Thursday.

A draft resolution, cited by Reuters, calls for halting the fighting around Hodeida and other populated areas, ensuring the flow of commercial and humanitarian goods and a fast injection of foreign currency into Yemen's impoverished economy.

A previous bid to launch UN-sponsored talks in September in Geneva collapsed when the Houthi rebels failed to show up.

UN Secretary General Antonio Guterres has called on the warring factions in Yemen to engage in peace talks. Recent clashes in the port city of Hodeida have exacerbated the world's worst humanitarian crisis. (12.11.2018)