The German-Jewish Blumenfeld was one of the mid 20th-century's most sought-after fashion photographers. But his work is more than glitz and glamour. An Amsterdam show highlights how avant-garde art played into his work.

An imaginative visionary who claimed to have "smuggled art" into his body of work, photographer Erwin Blumenfeld often embraced mischief when he produced his images.

His friendship with Dadaists impacted how he experimented with photography and his life experiences, which took the German-Jewish photographer from his Berlin birthplace to a failed business in Amsterdam to internment camps in France and eventually to the United States, also fed into the dark visual subtitles of his images.

While in Europe, Blumenfeld shot in black and white, but it's his kaleidoscopic photography that forms the subject of a new exhibition at Foam in Amsterdam: "Erwin Blumenfeld in Color — His New York Years." 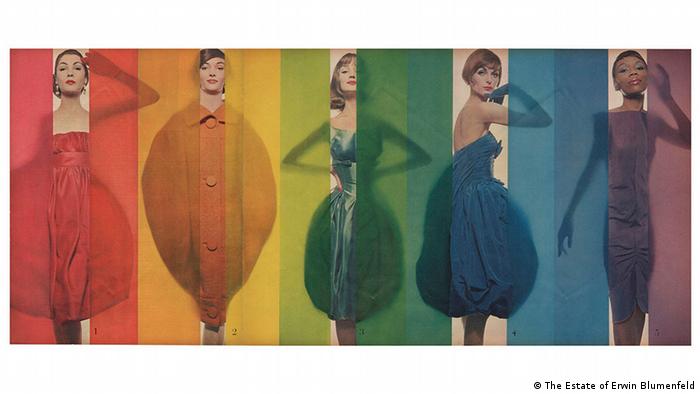 Experimenting in the backroom

Blumenfeld was a largely self-taught photographer. Mirjam Kooiman, Foam Curator, told DW, that he "started 'learning by doing' in the early 1920s in Amsterdam."

In 1922 he had embarked on a business venture as the owner of Fox Leather Company, a store specializing in handbags located on Kalverstraat, a major shopping street in Amsterdam.

"This is where he took portraits of customers, using a darkroom in the back of the store," Kooiman explained. "He experimented with a lot of negatives, and the darkroom process marks the importance in Blumenfeld’s work of the finishing in the lab."

Blumenfeld took this opportunity to explore photography without boundaries. Going against realistic portrayals of life at the time, like August Sander's portraits or the photojournalism of Henri Cartier-Bresson, Blumenfeld instead played with the medium, and his eye-catching images produced in the shop darkroom attracted more attention than the merchandise he sold.

"The final images display extremely tight framing, high levels of contrast, and lighting that creates dramatic, even devilish effects," Kooiman said. "He stood out for his experiments with photographic techniques such as double exposure, distortion, solarization and chemical effects."

"By bending the rules of photographic techniques, he could ultimately reach the effects he was aiming for," the curator added.

Blumenfeld was born in Berlin in 1897, and in 1908 he got his first camera, teaching himself the mechanics of photography and how to navigate a darkroom.

In 1913, once he was old enough to work, Blumenfeld was apprenticed to dressmaker Moses and Schlochauer, but soon after he was drafted as an ambulance driver in World War I.

As the war came to a close, Blumenfeld moved to Amsterdam, where he married Lena Citroen —  the niece of his good friend, the Dadaist artist Paul Citroen — and had three children.

His years in Amsterdam marked a productive period in his photographic career, though his leather business eventually flopped and went bankrupt. 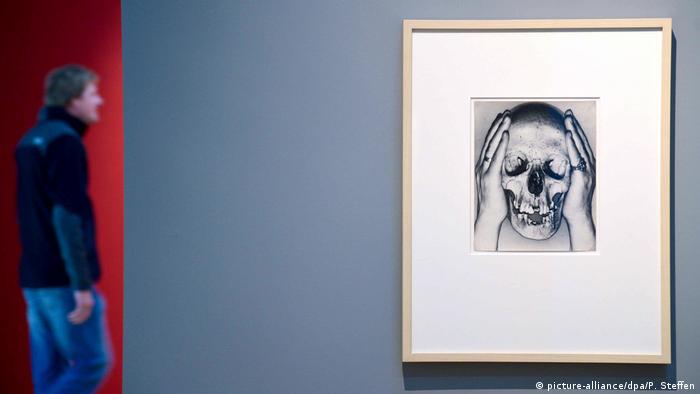 Blumenfeld photographed in black and white at the start of his career. This work, 'Death Skull' (at a 2014 exhibition), was made around 1932.

To start anew, he and his family moved to Paris in 1936, where it appeared he had a promising future ahead. Blumenfeld received portrait commissions of artists such as Henri Matisse and Georges Roualt.  Entertainer Josephine Baker, cabaret singer Yvette Guilbert and fashion photographer Cecil Beaton were among his other subjects.

Beaton was highly impressed by Blumenfeld's images published in the French magazines Photographie and Verve. So impressed, in fact, that Beaton connected him with French Vogue, where Blumenfeld then worked on contract.

But everything came to a halt once the Nazis occupied France, placing Blumenfeld in the internment camps Le Vernet and Catus due to his Jewish heritage. He eventually managed to flee with his family to New York City in 1941.

Despite the uncertainty and constant fear looming over Blumenfeld during these years, he maintained his artistic resilience. "What's truly outstanding is that despite life's hardships, nothing ever diminished his creative imagination," Kooiman explained. "It does explain the sinister side to his work; he had seen and experienced too much to take the American glamour for granted and he played with that in his work, but with humor without it ever becoming depressing."

In New York Blumenfeld immediately began shooting for the American women's fashion magazine Harpers Bazaar, and a few years later, a long-term work relationship with American Vogue developed. Blumenfeld introduced color into his oeuvre and became sought-after by the fashion and beauty worlds for his original take on the female form and artistic montages of clothing.

One of his images at Foam features four gloved hands belonging to one elegantly accessorized woman — but this detail might not be apparent at first glance. In another shot, five women posing behind prism-hued panels wear dresses matching the shades of these partitions. 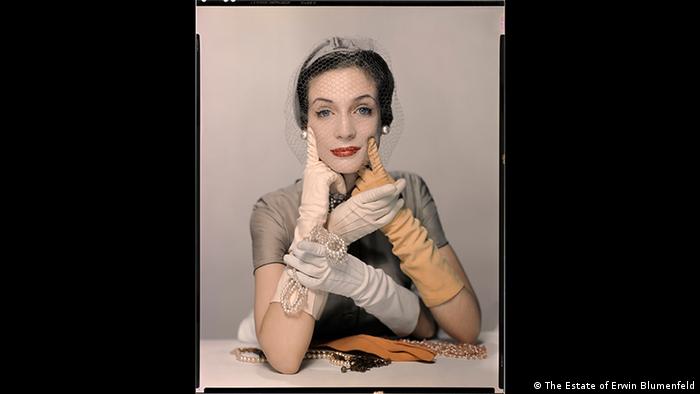 The art world played an instrumental role in inspiring Blumenfeld's ability to think outside the box, with Dadaists like Man Ray and George Grosz, as well as others in the surrealist movement enormously influencing Blumenfeld. In some of his prints, models heads and bodies were repeated in the composition like a mirror effect, and on a Vogue cover, Blumenfeld retained only the eyebrow, eye, lips and a mole of a model's face.

Read more: Sex sells: The objectification of women in advertising

"While producing commissioned work for fashion houses and magazines, he surreptitiously incorporated references to avant-garde art," Kooiman stated. "Blumenfeld was one of the first to realize fashion photography was not about displaying the latest fashion, but about creating iconic images.”

Celebrities like actresses Marlene Dietrich, Audrey Hepburn and Grace Kelly also started calling at his studio on Central Park South. By the 1950s it was reported that Blumenfeld was one of the highest paid photographers in the world. The American magazine The New Yorker described Blumenfeld as "one of the most stylish photographers of the twentieth century" in a 2014 issue.

Almost 50 years after his death in July 1969 his lively interpretations of fashion — without the additions of instant filters and Photoshop — still continue to incite awe, just as they did in Amsterdam many decades ago in his old leather goods shop on Kalverstraat. Today, however, they're in a museum on Keizersgracht.

"Erwin Blumenfeld in Color" runs February 15 to April 14 at Foam in Amsterdam.

How Dadaism revolutionized art 100 years ago

A century ago, international artists and writers met in Zurich to form a new movement, Dadaism. Their anti-art was a response to an ever-present issue: the madness of war. (02.02.2016)

The show "World in Transition. Art of the 1920s" at Hamburg's Bucerius Kunst Forum mixes New Objectivity paintings and New Vision photographs. The artists, many scarred by WWI, sought to portray the world as it was. (11.02.2019)

Using herself as model, American photographer Cindy Sherman critiques our contemporary views of identity and the role of women in society. She is being honored with the 2019 Max Beckmann Prize in Frankfurt. (12.02.2019)