Using herself as model, American photographer Cindy Sherman critiques our contemporary views of identity and the role of women in society. She is being honored with the 2019 Max Beckmann Prize in Frankfurt. 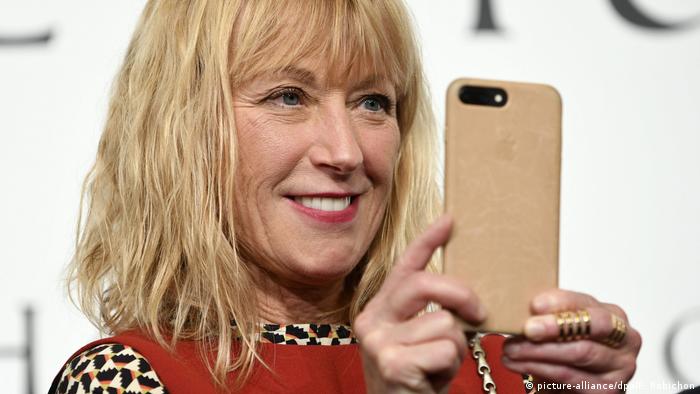 You're never too old for a selfie — or for Instagram.

At least, not if you're Cindy Sherman, the award-winning American photographer known for her unusual self-portraiture. On February 12 she will add another honor to her list when she receives the 2019 Max Beckmann Prize in Frankfurt, which recognizes outstanding performances in the fields of painting, graphic art, sculpture and architecture.

Although Sherman told W Magazine in 2017 that she "actually hates the idea of selfies," the artist, who turned 65 on January 19, appears to have taken to the platform known for self-staging like a fish to the water.

After an initial reluctance to engage with social media — telling the New York Times Magazine in 2016 that she found it "so vulgar" — in late 2016 Sherman opened a public profile on Instagram, a platform most popular with teenagers, fashionistas and celebrities.

The result is a grid that's entirely on-brand. Scroll down and you'll see vibrant landscape images alongside a series featuring her backyard chickens and snaps of clouds taken from an airplane window. Interspersed throughout these series are images of the artist herself: Cindy Sherman front and center. 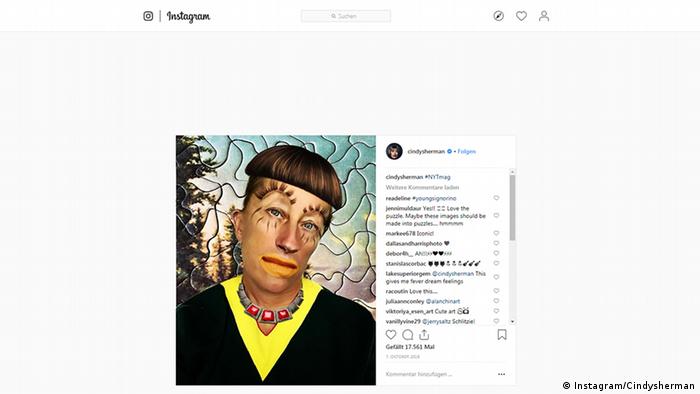 Entirely different from the traditional Instagram selfie, the photographs that Sherman posts of herself are distorted using several face-tuning apps; in one series of three images, the artist is seen posing in a red silk kimono but the backgrounds are switched in each photograph. Her lips are larger than life, painted a brilliant pink in one shot; in another, the artist's trademark blonde hairdo has been swapped for a tightly-curled brown wig. These aren't your traditional costume and makeup swaps; Sherman uses modern technology to reshape the posed images, warping them into social commentaries.

While the technology she's using for her Instagram images may be new, Sherman's signature style of costuming herself and distorting the results to transform her appearance is not. The photographer has become famous for using her own body as cultural commentary as she presents herself as the main subject of her images. Both photographer and model.

Sherman rejects the notion that her work is self-portraiture, claiming that she is posing as characters. Instead, the way she presents herself in her own work has served as an exploration of how women are portrayed in images, a consideration of gender and identity that has remained consistent in her work since she began her career in the 1970s.

Sherman's seminal 69-picture series, Untitled Film Stills, shot from 1977 to 1980, features the artist in costumes and poses that are reminiscent of the imagery found in media and films. The iconic black-and-white images critique society's portrayal of women, about how in their public roles they are oversimplified and oversexualized. Her 1992 series, Sex Pictures, takes the dialogue about the male gaze even further; instead of using herself as a model, Sherman poses prosthetics and the body parts of mannequins.

Read more: Traveling the US and Europe with Wim Wenders' Polaroid photos

Despite their criticisms of women's representation, these works have endeared Sherman to many in the fashion and culture industries. In the 1980s, she was asked to create fashion advertisements that appeared in Interview magazine. In the 1990s, she began cooperations with designers, including a postcard series for Comme des Garcons, a collaboration with fashion designer Rei Kawakubo in 1994.

She staged a series of portraits for Harper's Bazaar in 1993 and again in 2016; the latter took aim at the absurdity of street-style fashion photography, in which social media stars (the phrase "influencer" was coined later) are surrounded by professional photographers taking pictures that are "plandid" — planned candids. And just recently, pop star Justin Timberlake appeared in an Instagram video wearing a black sweatshirt adorned with a replica of a Cindy Sherman print.

The artist took in a record $3.89 million for a print of Untitled#96 in 2011; her works have since gone on to sell for millions of dollars. It seems that these over-the-top costumes and parodies of contemporary culture have both struck a chord and allowed those in the industry to laugh at themselves and the absurdity of how women are represented.

For her work,  Sherman has won numerous awards, including a MacArthur genius grant.

How portrait photography can rock your reality

Selfies aside, portrait photography has been called a violation, an "imprisonment of reality." But parallel photo exhibitions in Germany show how portraits can open our eyes to another reality, writes DW's Courtney Tenz. (24.02.2016)

If Vivian Maier is now considered one of America's most important street photographers, her fame came posthumously. Her work is on show at the Willy-Brandt-Haus in Berlin for the European Month of Photography. (25.09.2018)

On January 17, museums around the world are embracing the selfie as the #MuseumSelfie trend takes over social media. Institutions are hoping to benefit from the added publicity. (17.01.2018)