Turkish leader Recep Tayyip Erdogan has pledged Turkey's forces would lay siege to the Kurdish-controlled Afrin "in the coming days." Previously, Kurds denied reports of a deal with Damascus to fight the Turks together. 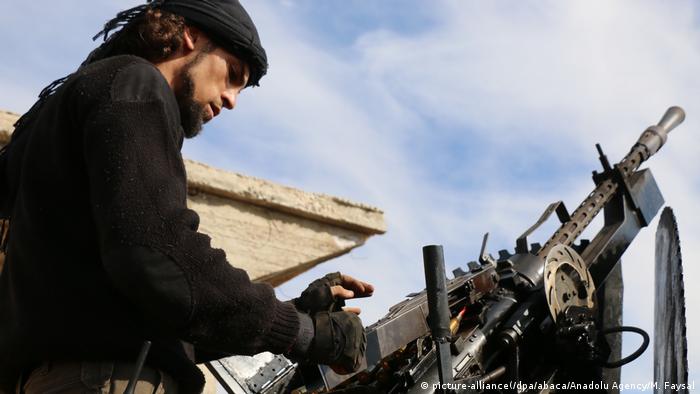 Turkish forces are continuing their push into Syria and would "swiftly" reach the Kurdish city of Afrin, Turkish President Recep Tayyip Erdogan told the parliament on Monday, as Turkey's offensive entered its second month.

"In the coming days we will lay siege to the center of the town of Afrin," he told lawmakers.

"Aid from outside will be blocked, and the terrorist group will have no room to bargain with anyone," Erdogan added, in an apparent reference to talks between the Kurdish forces and the regime.

On Monday, Syrian state media reported that Damascus would deploy its fighters to Afrin to reinforce the Kurds against the Turkish attack. Speaking to reporters on Tuesday, however, Erdogan said that Turkey thwarted this initiative diplomatically.

Syrian troops stay out of Afrin

While some analysts claim Turkey and its allies were making slow progress against the Kurdish YPG militia, Erdogan said it was to avoid risking the lives of soldiers and civilians.

"We did not go there to burn it down," he added.

Read more: What you need to know on Turkey's military offensive against Kurdish-held Afrin

Also on Tuesday, Turkish Foreign Minister Mevlut Cavusoglu said that Syrian pro-regime forces did not enter the Kurd-controlled area and that it remained unclear if they would. He also warned that "no one could stop us and the Turkish soldiers."

On Monday, YPG spokesman Nouri Mahmoud denied a deal had been made with Syrian government.

"There is only a call from us for the Syrian army to come in and protect the borders," he said.

Separately, a Kurdish official blamed Russia for blocking the alleged deal between Kurdish forces and the pro-Assad troops.

"The negotiations have been going on for a week now, but the Russians have been putting [up] obstacles not to allow such a deal to be implemented," Suleiman Jaafar, a member of the Afrin local council told the dpa news agency by phone.

"We have solid information that Russia has given Turkey the green light to destroy everything in Afrin," he said.

While Kurdish forces spearheaded the fight against the "Islamic State" militia on behalf of the US-led coalition, it would appear that Washington was also not ready to commit significant resources to averting the Turkish offensive.

"It seems that the two superpowers, the US and Russia, have given Turkey a free hand to attack Afrin," Jaafar said.