Erdogan rival and former HDP head Demirtas fights from jail | Europe | News and current affairs from around the continent | DW | 12.01.2020 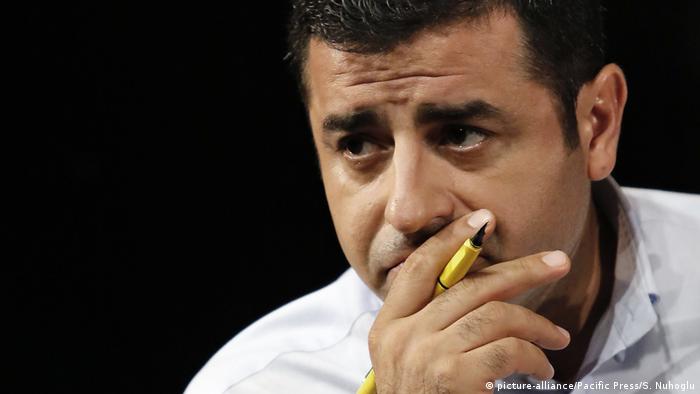 Selahattin Demirtas, the former co-leader of the Peoples' Democratic Party (HDP), has been detained for over three years in Turkey's Edirne high-security prison despite scant evidence against him. Demirtas and nine other members of parliament for the HDP, which advocates for Kurds and other minorities in Turkey, were arrested on November 4, 2016, and charged with 33 counts, which include leading a terrorist organization, spreading terrorist propaganda and instigating violence against the Turkish state. Prosecutors are seeking a jail sentence of 142 years.

Earlier this month, Demirtas testified via video link from the facility and insisted that he is a political hostage and asked to be able to use his testimony to respond to the accusations against him. His demand was refused and the trial was adjourned to May 28, but not before he was mentioned a dark chapter in recent Turkish history. "One hundred and twenty people were imprisoned in the basements of Cizre," he said. "There was a massacre. Civilians, babies and children died. ... How long will our country continue to hide this?" He said he was accused of offending President Recep Tayyip Erdogan because he had dared to talk about this tragedy.

The tragedy took place in 2015, after civilians in the city of Cizre, in southeastern Anatolia, took refuge in the basement of a building as clashes raged between the Turkish army and the Kurdistan Workers' Party (PKK).

There are several charges against Demirtas, who was proclaimed innocent in one hearing before another court sentenced him to four years and eight months in jail for "terrorist propaganda."

His lawyer Hadi Cin told DW that Turkey's justice system is arbitrary: "In the legal proceedings against Demirtas and the others from the HDP, the mechanisms are very slow. However, when there's an arrest warrant, suddenly everything goes very fast."

Cin said he believed that the state had set up a special regime for Demirtas and the other HDP MPs: a "completely illegal regime." Each speech and interview that Demirtas has given since 2007 has been held against him, Cin said, calling the trial illegal.

Demirtas is considered by many as the leading hope of Turkish politics. In the eight years that he co-led the HDP, he was able to transform it into a party that was popular beyond the southeast of Turkey. Its success in the 2015 elections  — it passed the 10 percent hurdle for the first time  — was largely thanks to him.

"Under Demirtas, the party had more votes than any Kurdish party had ever had," said Vahap Coskun, who teaches law at Dicle University in Diyarbakir. "He played an important role in this: He united the base voters and also opened up the party to non-Kurds."

"Today, politics is dominated by the old grandees Erdogan, Kilicdaroglu and Bahceli," Coskun said. "But their careers are coming to an end because of their age. In future, the gaps will be filled by three people (Istanbul Mayor Ekrem) Imamoglu, (former Foreign Minister Ali) Babacan and, mostly, Demirtas."

The impact that Demirtas has had from prison is growing. He ran in the presidential elections of 2018, campaigning from his cell via Twitter. He has also managed to publish two novels while in prison.

His imprisonment has drawn attention to the inhumane conditions at Edirne. Late last year, he was not taken to a hospital despite developing a serious illness until his family complained about this in the social networks.

The European Court of Human Rights has called for the immediate release of Demirtas, ruling that his detention is illegal and limits the freedom of political debate. He said the ruling confirmed his view that he is a political prisoner.