Turkey's Recep Tayyip Erdogan is set to return as the chairman of the AKP after rejoining the party. He was forced to leave the ruling party in order to become president, but the rules have since been changed. 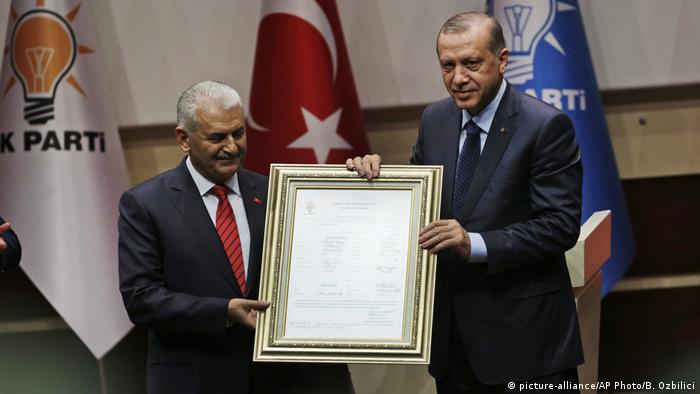 Istanbul authorities have withdrawn an invitation sent to Wikipedia founder Jimmy Wales to attend a major conference in the city. The reversal comes after Turkey blocked the website, citing objections to its content. (02.05.2017)

What happens now following the 'yes' vote in the Turkish referendum?

The referendum to change Turkey into an "executive presidential system" has passed with the narrowest of margins. DW examines the next steps in the transition period as the constitution undergoes an overhaul. (18.04.2017)

The government in Ankara is doing all it can to reach Turkish voters in Germany. They are now receiving letters urging them to vote "yes" in the country's upcoming referendum. The legality of the move is questionable. (08.04.2017)

The conservative AKP welcomed Erdogan back into its ranks at a Tuesday ceremony in the party's headquarters in Ankara. The president signed the membership document, with AKP members cheering loudly and the party head Binali Yildirim commenting that Erdogan had come back "home." Previously, Erdogan made a journey from his palace to the AKP headquarters, with images of his convoy broadcast live on Turkish TV channels.

"I am today returning to my home, my love, my passion," Erdogan in his speech. "This yearning (for my party) is ending after 979 days."

The Turkish president was one of the co-founders of the Islamist-rooted Justice and Development Party (AKP) in 2001 and a key figure in its rise to power with his run as prime minister between 2003 and 2014. Three years ago, however, Erdogan gave up his party membership to become the head of state, complying with a constitutional limit which specified that presidents must cut ties with their parties.

This limit has been scrapped along with many others after in a sweeping constitutional reform pushed by Erdogan and his political allies. The voters narrowly accepted the proposal in a disputed referendum last month. Key changes include switching Turkey from a parliamentary to a presidential system and granting the president unprecedented powers over the judiciary and other branches of government, as well as abolishing the office of prime minister.

While the majority of changes are set to go into effect only in 2019, Erdogan now has a legal right to rejoin his AKP party. The party officials also said he is likely to retake his position as the party chairman at an extraordinary AKP congress to be held later this month.

Even after exiting the party for legal reasons, the controversial strongman was involved in its functioning and directed the events behind the scenes with the consent of the current party head and Turkey's prime minister Binali Yildirim. Erdogan once described the party as his "fifth child" in addition to his two sons and two daughters.