Erdogan family drawn into corruption probe | Europe | News and current affairs from around the continent | DW | 06.01.2014

In the wake of a sweeping corruption probe, the Turkish opposition has requested a parliamentary inquiry into the relationship between Prime Minister Erdogan's son Bilal and a Saudi Arabian businessman. 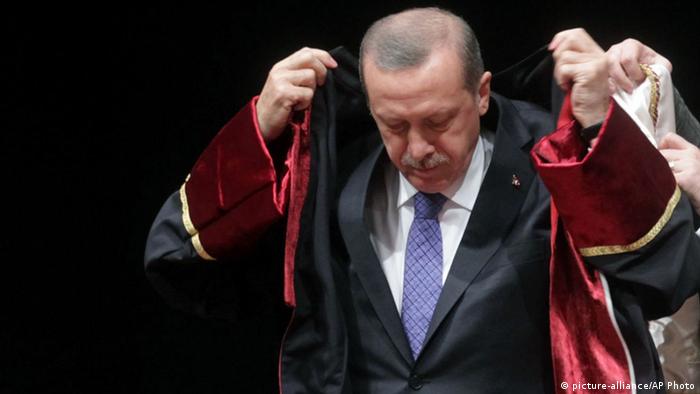 Within a month, Erdogan must reply to the request. Bayraktutan wants to know whether Bilal Erdogan actually met with al-Qadi, as the media have reported. "Al-Qadi was here illegally, we have photos to prove it," Bayraktutan told DW.

US authorities list al-Qadi as a supporter of the al-Qaeda terrorist network – an accusation the Saudi businessman rejects. Until October 2013, his name was on a UN list of persons sanctioned because of his alleged contacts to al-Qaeda. During this time, al-Qadi reportedly visited Turkey repeatedly, escorted by the Prime Minister's security detail.

Another problem for Erdogan 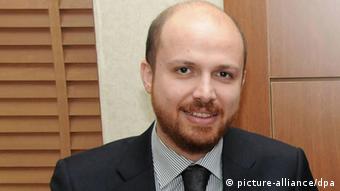 Bayraktutan's accusations are yet another problem for Erdogan as he tries to handle the corruption scandal currently engulfing his government. In mid-December 2013, Istanbul prosecutors arrested several dozen people who allegedly took bribes from an Iranian businessman, who was also detained. Two sons of Turkish ministers and the head of the state-owned bank Halkbank are in investigative custody.

A week later, the prosecution was preparing to order a second wave of arrests when head prosecutor Muammer Akkas was removed from the ongoing case at short notice. According to media reports, al-Qadi was on this list of suspects - and the premier's son, Bilal Erdogan, was due to be summoned as well.

Al-Qadi is no stranger to the Turkish government. In 2006, Erdogan publicly defended the Saudi Arabian businessman against the US allegations. The Istanbul prosecutors had him in their sights because al-Qadi is reported to have shown an interest in the privatization of property belonging to a police school in the city's Etiler neighborhood. According to media reports, the land is valued at one billion dollars (735 million euros), but was to be sold to investors, with no public bidding, for less than half this amount. Al-Qadi was one of the potential buyers.

Turkish media has published photos that allegedly show al-Qadi, surrounded by Turkish bodyguards, speaking to Bilal Erdogan in a hotel in Istanbul. In a separate inquiry, CHP politician Umut Oran asked Prime Minister Erdogan whether his son Bilal acted as mediator in the real estate deal in Etiler. According to the Istanbul city administration, the property was not sold and is still in public hands. 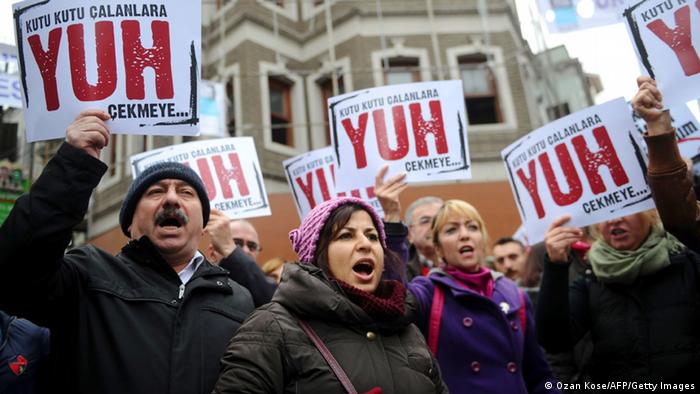 As the corruption scandal grows, so does people's dissatisfaction with the government

State within a state

"They're targeting my son, but it's me they want to hit," was Erdogan's response to the accusations. The Turkish premier says the graft allegations are an invention by enemies of the government who are trying to weaken his AK Party ahead of municipal elections on March 30. Erdogan hinted at the existence of a "state within a state" that wanted to discredit the government. The Turkish leadership holds a movement led by Islamic cleric Fethullah Gulen, once a close ally, responsible for the corruption accusations. Gulen has rejected the charges.

It is not clear what effect the accusations against the government and Erdogan's family will have on voters. Ilker Turan, a political scientist at Istanbul's Bilgi University, anticipates that they will be watching closely to see how Erdogan responds.

So far, the Prime Minister hasn't come up with a convincing explanation concerning his son's ties with the Saudi Arabian businessman, Turan told Deutsche Welle. The opposition in Ankara, however, is doing all it can to ensure that an explanation will be forthcoming.

As Turkey's corruption scandal engulfs more members of his party, Prime Minister Erdogan is placing blame in several directions. He has denounced a parallel state steered from abroad as well as last summer's protesters. (28.12.2013)

Power is slipping fast from the hands of Turkish Prime Minister Recep Tayyip Erdogan. But the possible alternatives for the country don't bode well either, writes DW's Baha Gungor. (28.12.2013)