Erdogan points fingers in corruption scandal | World| Breaking news and perspectives from around the globe | DW | 28.12.2013

As Turkey's corruption scandal engulfs more members of his party, Prime Minister Erdogan is placing blame in several directions. He has denounced a parallel state steered from abroad as well as last summer's protesters. 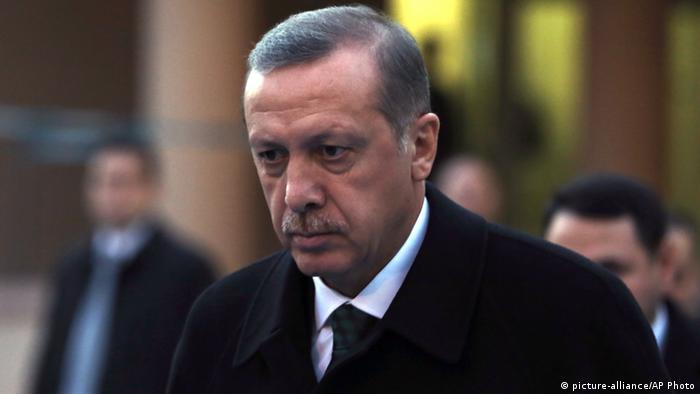 On Saturday (28.12.2013), thousands of people were gathered in Manisa, a town in Turkey's Aegean region, to greet and support Prime Minister Recep Tayyip Erdogan as he fights to redeem his administration from the multimillion-dollar corruption and bribery investigation that has implicated senior government members. Many have speculated that Erdogan's political rivals in the Gulen movement, headed by preacher Fethullah Gulen, used associates in the judiciary and police to bring the scandal to light. 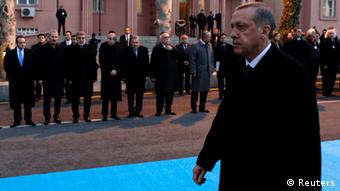 "With your support and if God allows, we will win this struggle. There are only 90 days until [local] elections, and I want all of you to show everybody who owns the national will in this country," Erdogan told voters in Manisa. His address came 10 days after news of the scandal began to break.

Although a defiant Erdogan vows to rid the government of what he calls "illegal organizations" or a "parallel state," pundits and veteran journalists say the affair may jeopardize the over ten-year reign of Erdogan's Justice and Development Party (AKP).

Turkish citizens have been shocked by pictures of millions of euros found in shoe boxes at the home of the director of Halkbank, a state-owned bank, and pictures of money counters found at the residence of a former interior minister's son.

Bekir Agirdir, a prominent social researcher, says it would be a mistake to believe Turkish voters will not demand a severe response to the allegations. "It's a widespread legend that the public is accustomed to corruption," he wrote in an analysis posted on the T24 online journal.

'A gang within the state'

Erdogan's AKP now faces a formidable rival in the Gulen movement, whose leader has resided in the US since the late 1990s. But the movement's strong representation in key state institutions is due partly to appointments made in years past by Erdogan's government. At the time, the AKP and the Gulen movement viewed each other as allies in a power struggle against the Turkish army. 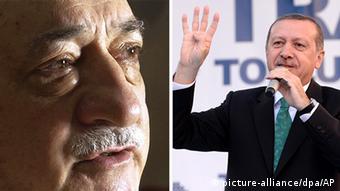 Erdogan reiterated his view Saturday that the scandal is being coordinated by international forces, saying, "Unfortunately, there is an organization, a gang being structured within the state."

The prime minister's critics say he is returning to a pattern of labeling all of his opponents as enemies, traitors or foreign spies.

The specter of Gezi protests

Erdogan's scandal-hit AKP is already looking ahead to local elections scheduled for March 30, 2014. They are expected to serve as a key predictor for presidential polls to be held in the summer. Erdogan, widely seen as preparing a bid for the presidency, is keen to ensure his party continues to earn a comfortable majority among voters.

"If a public opinion poll were conducted this weekend - in the very initial phase of these developments - we could see a three to five point decrease in the AKP's votes. But the percentage of increase or decrease will ultimately depend on how the AKP manages this process," Agirdir argued. 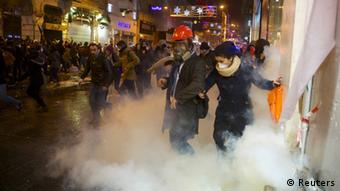 Demonstrators in Istanbul clashed with riot police in anti-government protests

The researcher said he has sensed public sentiment turning increasingly against the government in the last two years, as the AKP expanded its influence on Turkish political and cultural life. That sentiment was on display during the Gezi Park protests last summer, which Erdogan and his government classed as a revolt against renewal and economic growth in Turkey.

Although a powerful opposition force did not emerge from the Gezi protests, some participants from last summer have called for renewed demonstrations. Erdogan has been quick to link the ongoing corruption probe with the turmoil in Istanbul in May and June 2013, saying, "They tried to stop the building of new Turkey through Gezi events but they failed. Now they are trying it once again."

Power is slipping fast from the hands of Turkish Prime Minister Recep Tayyip Erdogan. But the possible alternatives for the country don't bode well either, writes DW's Baha Gungor.

Turkey expert Ekrem Eddy Guzeldere discusses the forces that may be able to sway the Turkish judiciary as well as how the corruption scandal may influence the country's 2014 elections.

Turks in Germany rally behind Erdogan