Emmanuel Macron: A Republican ′Sun King′ whose popularity is not setting | Europe| News and current affairs from around the continent | DW | 24.12.2017

Emmanuel Macron: A Republican 'Sun King' whose popularity is not setting 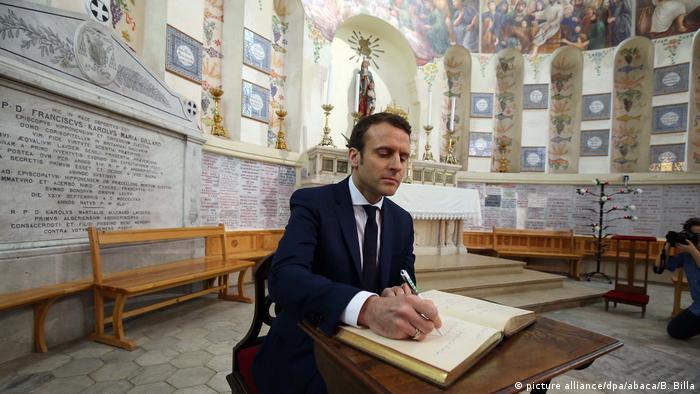 Germany's Angela Merkel has said she wants to establish a joint proposal with France on reforms to the eurozone by next March. The French president has been pushing for a shared eurozone budget and governance structure. (15.12.2017)

President Emmanuel Macron has called on the Iraqi government to engage in "constructive national dialogue" after his meeting with Iraqi Kurd leaders. Macron vowed to preserve the rights of the Kurdish people. (02.12.2017)

The young French president has decided to save the planet. He has put Donald Trump in his place, and is also taking advantage of the current vacuum that has opened up in Berlin's absence, says Jens Thurau. (12.12.2017)

France 2's recent 40-minute interview with Emmanuel Macron got underway in the president's office. Macron wasted no time in telling the reporter from the French public broadcaster that he works hard and sleeps very little. The subtext of his statement was that his power has not only been legitimated through his electoral victory in May, but also though his tireless work and total dedication to the well-being of the French citizenry.

In the interview, Macron referred to the French as "my people" — through not everyone welcomed his language. Some, like French newspaper Le Monde, thought this language had a somewhat grandiose quality to it, reminding it of French monarch Louis XIV, the so-called Sun King who sought absolute power during his 72-year reign. Thus, the paper's description of Macron as a "republican monarch."

This label appears to capture what other observes also criticized about this recent TV interview. Many were irked by the interview's mix of quasi-monarchic and quotidian themes. The TV segment used the Elysee palace as a majestic backdrop for this interview with a worldly, young and energetic French president. The president's advisers surely aimed to curate this exact mix of themes, hoping to woo viewers.

While striding through the palace's elegant halls, Macron confided that he wanted to discover "France's destiny." This grandiose claim was ridiculed online. And yet, Macron's style does seem to resonate with many. Le Monde concluded that, in terms of politics overall, "The French people welcome a certain degree of political authority". 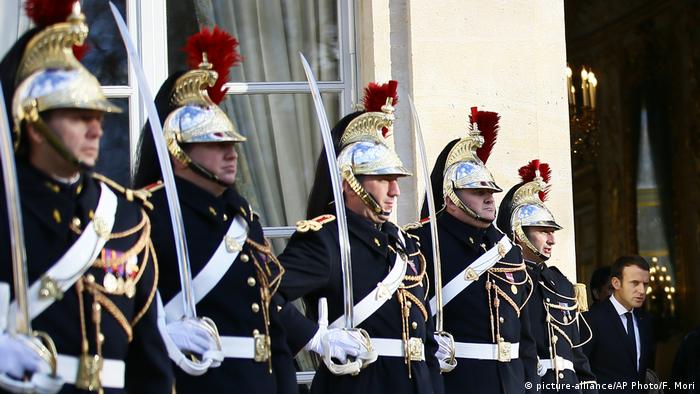 The luster of power: A reception at the Elysee in December 2017

In fact, Macron's current approval ratings are up. This is in sharp contrast to his predecessors Nicolas Sarkozy and Francois Hollande, who after six months in office had to contend with tepid public support. Public opinion research institute Ifop has shown that Macron currently enjoys a 52 percent approval rating — up from a dip down to 40 percent in August. And polling institute Odoxa claims Macron even enjoys an approval rating of 55 percent.

Macron's popularity can be traced to a number of reasons. The most obvious of them: his age. Macron just turned 40, so he was still in his 30s when he was elected president. It's a young age to hold such an office. But there are similarly young politicians in Europe today: Austria's Chancellor Sebastian Kurz, Estonia's Prime Minister Juri Ratas, Ireland's head of government Leo Varadkar, all of whom are in their (late) 30s.

Christophe Barbier, editor-in-chief of weekly news magazine L´Express, subsequently argued that, "the people have chosen to retire the generation that has failed to address the crises (of unemployment, poverty and immigration)." He added that,"some nations have chosen populism, others have opted for a cult of youth, and others still have picked populism through a cult of youth." Barbier cautioned his readers to wait and see if this new generation would succeed, but he pointed out that the mission entrusted to such leaders is the same: "Don't try to right this world, create a new one." 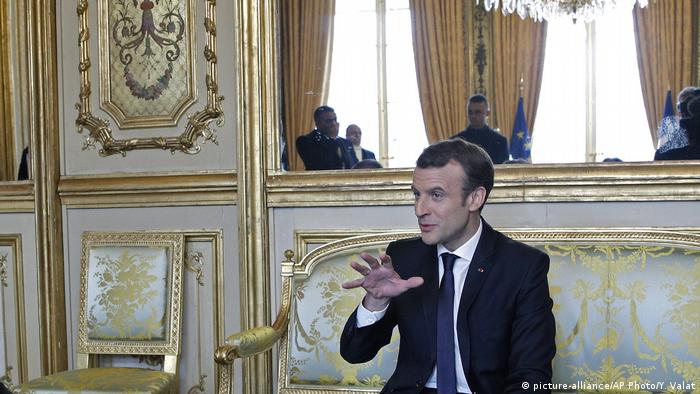 Macron, seen here at a meeting with Jordan's King Abdullah II at the Elysee on December 19, has shown himself to be not just young but also innovative and keenly focused on the electorate

A mix of old and new

But Macron's isn't radically reinventing his country. At the very least he is tapping into France's national legend in order to avoid overwhelming the more conservative sentiments of the populace.

At the same time, Macron has taken (or is about to take) a new approach to the labor market, the country's education sector and immigration. His labor market reforms have chiefly aimed at introducing more flexibility into the market and rolling back worker's rights — measures which have sparked large protests. Yet many in France also welcome his reforms.

Le Monde thinks Macron is in the process of maneuvering the country out of a dead-end, aided by his competent team. This is what distinguishes him from his predecessors, the paper says, thereby echoing the opinion of many French citizens today. Macron is pursing a more rigid approach to education that makes fewer concession to the notion of multiculturalism. And he is working on a immigration law that will require new arrivals to meet numerous criteria.

France under Macron is not so much a radically reinvented country but rather one that has abandoned the hands-off attitude cultivated by the goverment of his predecessor, Francois Hollande. Unsurprisingly, Macron's tougher stance is also beginning to appeal to some far-right National Front supporters. Recent polls suggest that 35 percent of National Front backers welcome Macron's politics. That's 14 percent more than in November.

Macron's power is also due to the weakness of his political opponents. The conservative Republicans party under the leadership of Laurent Wauquiez is currently trying to figure out its future political course. The Socialist Party, which was dealt a major blow at the last parliamentary elections, remains dazed and is only slowly getting back on its feet. And Jean-Luc Melenchon's left-wing France's Unbowed party only appeals to about 20 percent of the French populace. Many in France therefore see no viable political alternative to Macron — and that just makes him all the more popular.