Elvira Nabiullina: The central banker Vladimir Putin is relying on to clean up Russia′s economic mess | Business | Economy and finance news from a German perspective | DW | 29.04.2022

Elvira Nabiullina: The central banker Vladimir Putin is relying on to clean up Russia's economic mess

Elvira Nabiullina has charmed many in the West with her policymaking. Analysts say she has blemished her reputation by remaining at the helm to help sustain Putin's war machine in Ukraine. 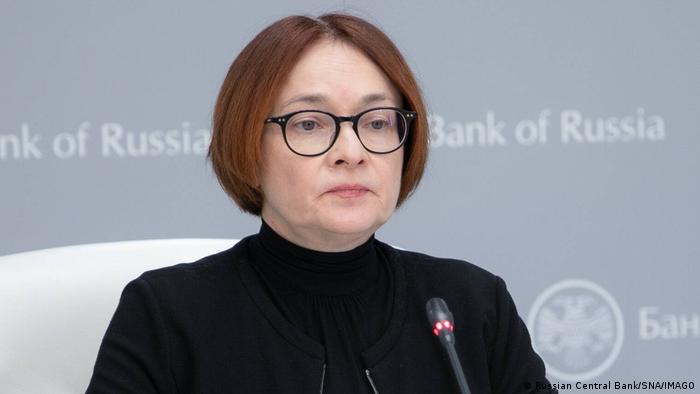 When Elvira Nabiullina chose to dress all in black for her first public appearance just days after Russia's invasion of Ukraine, she prompted a wave of conjecture. The color of a central banker's clothing wouldn't normally have been a matter of discussion if it weren't for the woman donning it.

Nabiullina, a close ally of Russian President Vladimir Putin's, is known to communicate her views on the economy and central bank policy via her choice of clothing and brooches, much as former US Secretary of State Madeleine Albright did. A bullfinch brooch symbolized the arrival of winter and a freeze on key interest rates, and a brooch in the form of the Latin letter V meant an economic recovery was underway.

Nabiullina's funeral attire was widely interpreted as a gesture of mourning. However, opinions were divided about what exactly she was mourning: the death of the Russian economy reeling from some of the harshest ever Western sanctions, the people of Ukraine, or the demise of conventional monetary policy that brought her global acclaim. Some saw it as her way of expressing her disapproval of Putin's war, which has displaced millions of people and destroyed a number of Ukrainian cities.

"I didn't spot any brooches. So, it wasn't a time for any kind of playful gestures or hints to the market. It was just very sober, a reflection of the tragic times," said Tatiana Orlova, lead emerging markets economist at Oxford Economics.

Weeks later, the highly regarded central bank governor was reported to have offered to resign as the Ukraine war dragged on. Putin told her to carry on and nominated her for a new five-year stint; He needed his close aide's firefighting skills more than ever to deal with the economic fallout of the war.

"I wouldn't want to be in her shoes right now. She will have to pick up the pieces, basically, sort out the mess," Orlova told DW. "The Russian economy has plunged into potentially a very deep recession. She will be one of the top people responsible for policy decisions over the next few years." 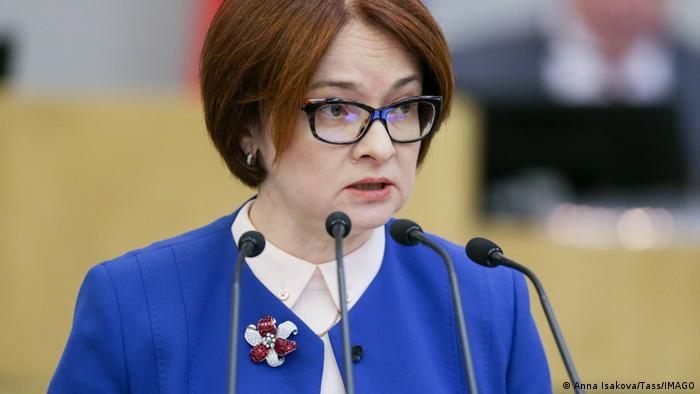 Nabiullina is famed for communicating via her choice of brooches

Nabiullina is no stranger to crises. She is credited with steering the Russian economy through a series of shocks since taking over as the head of the Central Bank of Russia in 2013, including Western sanctions following the annexation of Crimea.

She was praised for her steely determination to crack down on corruption in the Russian banking sector. Hundreds of banking licenses were withdrawn, including from institutions considered untouchable until then, nearly halving the number of Russian banks to around 500.

As the Russian ruble plummeted against the US dollar in 2014 amid plunging oil prices and crippling Western sanctions, Nabiullina raised the interest rates to 17.5% and transitioned the ruble into a free-floating currency.

Her conservative monetary policy, which helped Russia return to growth and bring down inflation, won her global accolades. Western publications, including Euromoney and The Banker, lauded her as one of the world's best monetary policymakers.

The Russian banking system remains plagued by corruption and bad loans. Several underperforming banks continue to be propped up by state funding, much of which continues to be funneled elsewhere.

"She did the easy stuff, the low-hanging fruit. She never really took on vested interests or really addressed the problems of kleptocracy, dirty money, because she couldn't, because obviously, that was too close to the bone for Putin," Timothy Ash, emerging market strategist at BlueBay Asset Management, commented. "So, in a way, she was just window-dressing as well for the regime." 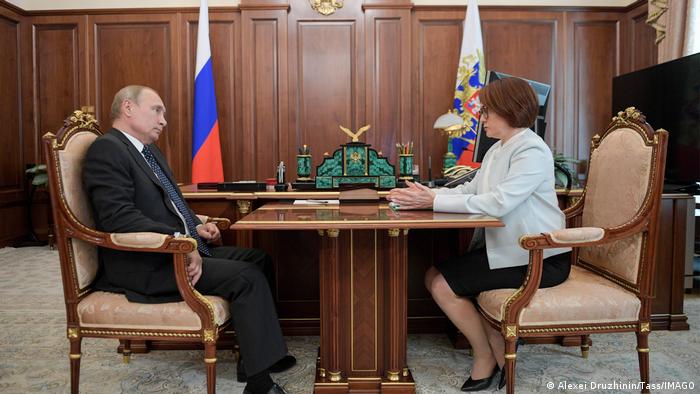 A liberal in Putin's close circle

An ethnic Tatar — the largest minority group in Russia — Nabiullina is a rare female senior official in Moscow. The 58-year-old's father was a chauffeur and her mother worked as a manager in a factory. A lover of French poetry and opera, she graduated in economics from Moscow State University.

Nabiullina became the first woman to head the central bank of a G8 country in 2013, prior to Russia's suspension from the grouping of rich countries following the annexation of Crimea. She previously served as Putin's economic adviser, a job she took up following a stint as economy and trade minister.

"Until now, I think Putin cared that she was respected in the West. He saw her as not motivated by the same kind of rapacious corruption and party interests that existed in much of Russian elite circles," Hess said. "He saw her as somebody competent, who he could appoint to genuinely do the best job in his interest."

Nabiullina is often lauded as an effective communicator for her ability to explain complex macroeconomic concepts in relatively simple language comprehensible even to ordinary Russians.

"Her little wardrobe tricks are part of her communication style; just to make it more understandable for not just the analysts, but also the general public," Orlova said.

At the height of the pandemic in 2020 when the government called on people to self-isolate, Nabiullina wore a house-shaped brooch. That was followed by a pigeon brooch when she announced an interest rate cut to underscore her dovish or easy-policy stance. A brooch in the form of a pause button meant a freeze in rate cuts and a hawk brooch symbolized higher interest rates.

Softly spoken, Nabiullina has long been viewed as a liberal in Moscow's officialdom and is often criticized by hardline government advisers and lawmakers for her policies. But with her decision to remain in office perceptions are changing. She has been sanctioned by Canada and Australia for her close links to the Russian regime.

"Her decision not to quit suggests that she's not as liberal as people thought her to be," Ash said. "In the end, she's helping Putin sustain the war in Ukraine by staying around. Her legacy will be damaged."

A challenging stint for Nabiullina

Nabiullina starts her third five-year term in June, which promises to be the most challenging period yet in her central bank career. The Russian economy hit by several rounds of sanctions is expected to shrink 8.5% this year, according to the International Monetary Fund, the steepest contraction in decades. Inflation has accelerated to the highest level in almost 20 years.

The central bank has responded by raising interest rates and introducing capital controls to artificially prop up the ruble, which fell to record lows against the dollar following the start of the invasion.

Nabiullina, who helped build "Fortress Russia" over the past few years to blunt the impact of Western sanctions, is left having to contend with sanctions that have frozen a large chunk of the central bank's $630 billion (€696 billion) foreign reserves, severely limiting her ability to deal with the economic crisis. Nabiullina's problems could be compounded by further bans on Russian energy — the country's biggest source of revenue — something that is being debated in the European Union, the biggest buyer of Russian energy by far.

"She is the best person to deal with the current crisis. I wish Russia had someone as competent as her as the president," Orlova said. "She has her work cut out. It will be an extremely challenging period in her career."