Top policymakers and business leaders have flocked to Davos again for the annual World Economic Forum in the Swiss Alps. The meeting is overshadowed by trade conflicts and a resurgence of economic nationalism. 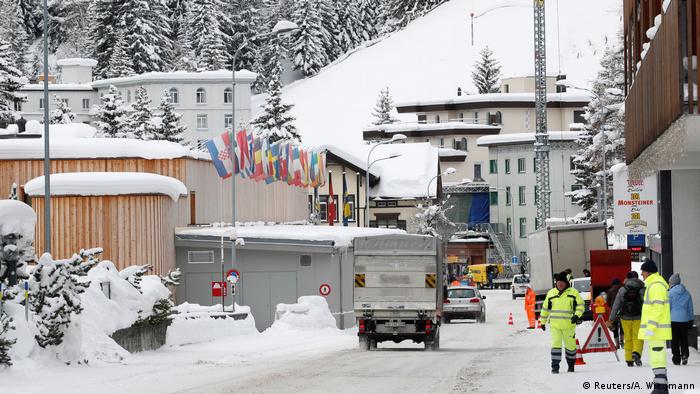 Global growth is slowing, trade conflicts are worsening, problems related to climate change and environmental protection remain unresolved while big changes are ahead of us as digitalization gains traction.

"Independently, each [issue] would be a daunting challenge — all these challenges at the same time are a really big challenge that can only be resolved through cooperation," says the president of the World Economic Forum (WEF), Borge Brende.

But the willingness to cooperate has been declining globally. US President Donald Trump is an staunch opponent of multilateral treaties. Brazil's new president also prefers to strike a nationalist chord. In Europe, everything seems to center on Brexit. Italy is governed by populists, while yellow vests are rocking the boat in France.

The Middle East remains a powder keg, and China is firing a broadside against Taiwan.

"Dialogue, in order to create mutual understanding, is more necessary than ever before," says Klaus Schwab, founder and executive chairman of the World Economic Forum.

"We have 37 heads of state or government from Europe and Eurasia joining us," he said. "We will have nine heads of state from the Middle East and six Latin American presidents coming," Borge emphasized, adding that many more would be in Davos from Africa.

All in all, some 70 heads of state and government will be there as well as the heads of the United Nations, the International Monetary Fund, the World Bank and the World Health Organization. The list of participants counts some 3,000 people, also representing the realms of business and science, as well as various environmental and development agencies.

So what are they all doing in the Swiss Alps? Nothing less than trying to improve the world.

"Our challenge now is to use these governmental leaders, together with the leaders of international organizations, the business community and civil society to really push the envelope on those most pressing issues in the world," Brende said. 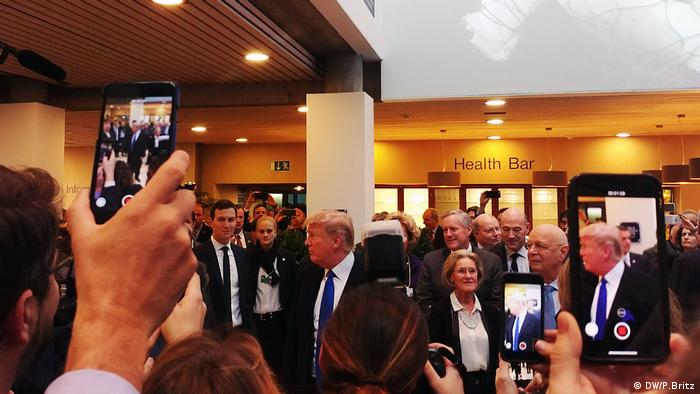 There's no denying that US President Donald Trump was the No.1 attraction for the media at the WEF meeting in Davos in 2018

No Trump, no Macron

Davos is not the place where treaties are signed, though. US President Donald Trump, who has questioned multilateralism like no other, will not attend, saying he has enough on his plate to defuse his budget row with Congress.

Nor will French President Emmanuel Macron be there. He cites a tight schedule, and being at a meeting of elites may further harm his credibility with angry citizens back home.

By contrast, German Chancellor Angela Merkel will be in Davos, and so will Brazil's new president, Jair Bolsonaro, who is to deliver his first speech in front of an international audience.

Trump's absence is bad for the forum's PR machinery. Last year, the US president dominated the headlines in Davos even though he had nothing to contribute toward resolving any global conflicts. Instead, Trump called on businesspeople to invest more in his country.

What will the future bring?

Davos this year is taking a closer look at what impact globalization and digitalization will have on us all. Speakers are risking a look ahead in pursuit of a global order in the age of the fourth industrial revolution.

According to WEF founder Klaus Schwab, the world lacks a vision, and the Davos forum could help out there. He's aware, though, that proposals made by elites tend to be viewed skeptically by ordinary people around the globe.

"Elites are not considered trustworthy, if the time horizon is the next election or the next quarterly report," says Schwab. "But in Davos, we deliberately want to take a longer-term view; we want to be opportunity-oriented, and we want to shape."

Schwab says you need to differentiate. Globalization, he argues, is irreversible and has produced many winners. But he and the forum don't believe that everything should be subjected to the forces of the market. He said he warned as early as 1996 that globalization in its current form would not be sustainable.

"If we speak about Globalization 4.0, it has to be more inclusive, more sustainable and it has to be based more on moral principles."

Meanwhile, Schwab's self-imposed plan to considerably raise the number of female WEF participants has seen little progress so far. The female participation quota reaches 22 percent this year, only slightly up from the 21 percent recorded in 2018.

The future of labor

Chinese President Xi says he will "leave no room" for separatist activities, and that Beijing "reserves the option of taking all necessary means," including the use of force, for the Taiwan "reunification." (02.01.2019)

The Polish Economic Forum in Krynica-Zdroj is often dubbed "Poland's Davos," offering a wide range of debates on global or regional economic issues. DW's Jo Harper shares his personal view on the gathering. (06.09.2018)