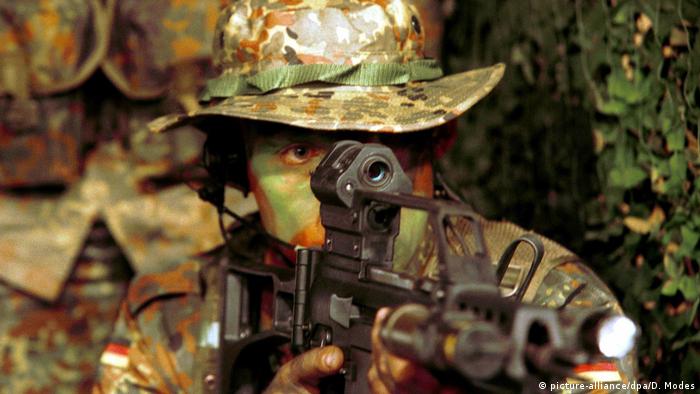 A KSK soldier goes on trial in Leipzig after explosives, weapons and far-right materials were found at his property

The 45-year-old was arrested last May after two kilograms (4.4 lbs) of explosives and weapons, including an assault rifle with ammunition, were discovered at his property in Collm, near the easter city of Leipzig.

The raid also uncovered several thousand pieces of ammunition, a crossbow, a smoke grenade as well as several arms parts, such as a silencer.

The suspect confessed to maintaining the weapons cache, which he said consisted of older items from the Bundeswehr inventory that he had used for training purposes since there was often a lack of equipment.

After assessing the weapons himself, he told the Leipzig Regional Court that he assumed they were no longer suitable for Bundeswehr operations.

Investigators found extremist documents, such as a songbook of the former Nazi SS militia, extreme-right magazines and stickers.

According to the General Prosecutor's Office, the specific motive for the crime is still unclear.

Investigators say there are no indications that other members of the KSK or the wider German army were involved.

Is this a unique case?

Germany's intelligence agencies have been concerned for some time that some Bundeswehr soldiers, including those in the KSK, are members of far-right groups.

In January last year, a report by Germany's Military Counterintelligence Service (MAD) revealed that 500 soldiers were being investigated for right-wing extremism.

One KSK unit was disbanded last year after revelations of extremist activity within its ranks.

Founded in 1996, the KSK is shrouded in secrecy. Its members are trained for hostage situations or special operations in war zones.

But not much else about its activities have been made public, not even the number of soldiers in its ranks, though defense experts put estimates at 300.

All KSK fighters pass through a grueling training program and are sworn to secrecy. They are always masked and are prohibited from telling anyone, including their closest family, about their missions.

Prosecutors have said that the suspect was planning to take over the German government and kill immigrants. The Bundeswehr has suffered from a spate of similar incidents in recent years.