Opinion polls suggest President Bukele and his Nuevas Ideas party are set to wrest control of the legislative body from the two parties who have long dominated the political landscape. 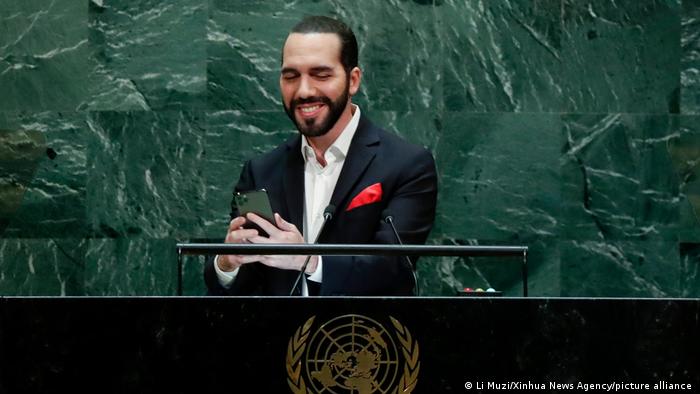 President Nayib Bukele, seen here taking a selfie at the 2019 UN General Assembly, could increase his hold on power

People in El Salvador headed to the polls on Sunday in legislative and municipal elections that could see President Nayib Bukele increase his hold on power.

The social media-savvy president is looking to continue his overhaul of traditional politics while his Nuevas Ideas (New Ideas) party, which currently holds no seats in the assembly, is seeking to wrest control of the legislative body from the two parties who have long dominated the political landscape in El Salvador.

Some 5.4 million people are registered to cast ballots to elect 84 lawmakers and 262 mayors.

Concerns of an authoritarian regime

Opponents of the president fear that if his party gains control of the legislative assembly it will give him a free rein to govern unilaterally from a position of strength.

The 39-year-old's tough actions to fight crime and combat the coronavirus pandemic have already raised concerns about democratic and media freedoms in the Central American country, leading to accusations that Bukele and his party are edging closer to an authoritarian regime.

Opinion polls suggest Nuevas Ideas — the party founded by Bukele in 2018, but too late to participate in the last legislative election — could secure more than half of the mayoral positions, and enough seats to hold a majority in Congress.

A two-thirds majority in Congress would enable Nuevas Ideas to appoint high-level government officials, such as the attorney general and five of the 15 Supreme Court justices.

Thousands of migrants, including families, set off to travel thousands of kilometers through Central America to the US. They are hoping to leave behind poverty, unemployment, gang violence and natural disasters.