An Egyptian appeals court has canceled a ruling to list Palestinian group Hamas as a terrorist organization. The group welcomed the decision, saying the court's ruling will help ease tensions with Cairo. 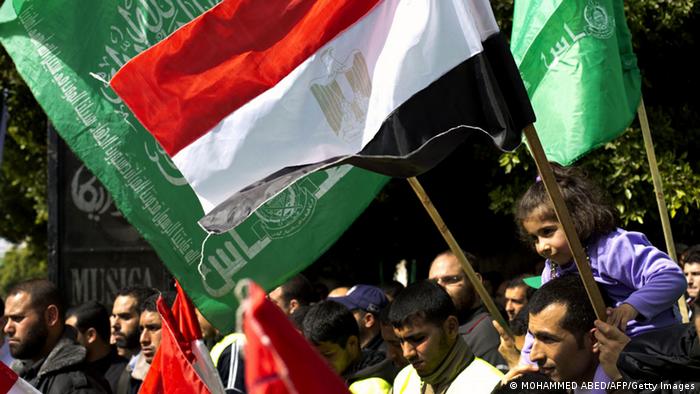 An Egyptian court overturned a ruling issued by a tribunal in February, branding the Palestinian Islamist movement Hamas as a "terrorist" group. An official said that the earlier ruling was thrown out because the court that had issued it was not deemed "competent" to pass such verdicts.

The Islamist movement, which controls the neighboring Gaza Strip, had strongly condemned the February verdict at the time, which came only a month after another court had ruled the armed wing of Hamas a "terrorist group".

The verdict took the ties between Hamas and Egyptian authorities to a new low. But the government quickly appealed the ruling in March, which then took three months to overrule the verdict through the country's Urgent Matters Appeals Court.

Tunnels at the heart of fighting

The use of illegal underground tunnels along the Egyptian border is alleged to be at the heart of the ongoing dispute, with allegations rife that these are used to smuggle weapons into Egypt. Hamas, however, considers the tunnels its lifeline, claiming that they mainly are used to transport food supplies.

The Egyptian army stated that it had destroyed hundreds of tunnels, which it emphasized were used for smuggling supplies and arms between Egypt's Sinai Peninsula and the Gaza strip.

Egypt has traditionally been regarded as a broker between Israel and Hamas. But relations between Cairo and Hamas had deteriorated after the 2013 ousting of Egypt's Islamist President Mohamed Morsi by the country's then-army chief and now-President Abdel Fattah al-Sisi. In March 2014, Egypt banned all Hamas activities on Egyptian soil and froze the organization's assets. It is uncertain whether the latest court decision will affect previous rulings.

An Egyptian court has designated the military wing of Hamas a terrorist organization, signaling further strains between Egypt's government and the movement that rules the Gaza Strip in the Palestinian territories. (31.01.2015)

Hamas refuses disarmament in Gaza until all demands are met

Hamas leader Khaled Meshaal has said the Palestinian Islamist movement will not disarm until all its demands are met. He added that the latest 50 days of bloodshed would not be the last round of conflict with Israel. (28.08.2014)