Egypt quells protests with more stick than carrot | Middle East | News and analysis of events in the Arab world | DW | 10.10.2019 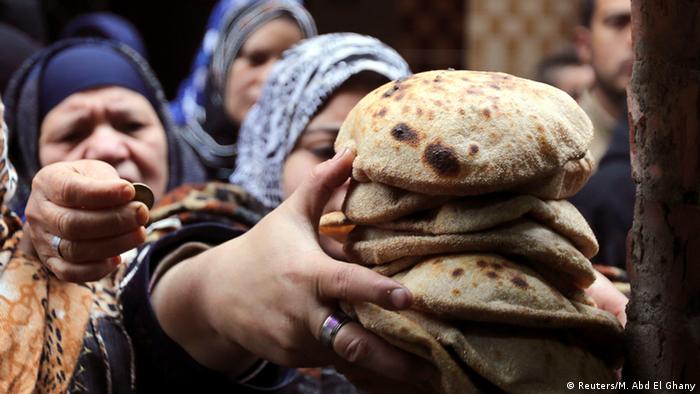 Since rare, sporadic protests flared in Egypt three weeks ago, authorities appear to have contained the popular anti-corruption movement that was fuelled by declining living conditions — using both a heavy hand and some concessions. But dissatisfaction remains.

Ahead of potential protests on Friday, Prime Minister Mostafa Madbouli denounced last month's unrest as a part of an external "brutal war” designed to create "confusion." He warned Egyptians on Tuesday that his government will not allow protesters to spread "chaos".

Street demonstrations have been heavily restricted since 2013, so few expected protests of this scale after Egyptian businessman Mohamed Ali, who was in self-imposed exile in Spain, uploaded a series of videos alleging corruption within President Abdel Fatteh el-Sissi's regime. Within weeks of Ali sharing the videos, protests took place in Egyptian cities on September 20.

Read more: Muslim Brotherhood or el-Sissi rivals: Who is behind Egypt's protests?

But after a government crackdown described as the "most violent campaign in Egypt's history,"and limited compromises to those suffering under austerity measures, the protest movement may have been momentarily quelled.

The price of stability

El-Sissi's government initially dismissed Ali's allegations as "sheer lies" but has since acknowledged the frustration of the 32% of Egyptians facing poverty. The government cut fuel prices for the first time in decades and reintroduced food subsidies for some of Egypt's poorest.

In a Facebook post one week after protests began, el-Sissi said he understood "the position of citizens who have been negatively affected." He then reinstated food subsidies to some 1.8 million people who were removed from the program eight months earlier. The food staples system reduces the cost of goods, including pasta and rice.

Those initial restrictions were a continuation of austerity measures introduced when the IMF agreed to a US$12 billion (€10.9 billion) loan in 2016. Even though the reinstatement of subsidies will be slow to kick in, last week's concessions gained by the protests could cost Egypt dearly.

"This, of course, is symbolism at the moment," Egypt researcher Luca Miehe from the German Institute SWP told DW. "But…this has dire consequences for Egypt's macroeconomic status and the future of possible negotiations with the IMF."

Food subsidies make up 27% of all subsidies, grants and social benefit expenses in the 2019-20 budget, in a situation where Cairo needs to raise US$6-7 billion (€5.4-6-4 billion) to finance public debt next year, according to analysts quoted by Reuters.

But Egypt observers say the quietening of protests is more due to violent repression rather than concessions or gestures towards reform.

"This quite intensive crackdown really closed off the space and made it seem like the consequences of protesting were going to be quite serious," Anthony Dworkin, senior policy fellow at the European Council on Foreign Relations, told DW. "The number of people affected by the food subsidies is not that great…that's not particularly had an impact."

Activists say more than 2,600 people have been arrested in connection with the protests over the last three weeks, including children, human rights lawyers, academics and politicians, in a system where security has relied on widespread abuse including torture, according to Human Rights Watch. Anti-government protesters take to the streets in Cairo

Authorities blocked news and political sites and interrupted other internet services, the rights group said, while people in the vicinity of protests had their mobile phones searched for evidence of critical content.

State media was initially silent, denying the protests had happened and later blamed foreign countries and the Muslim Brotherhood.

"I would like to know how they can deny the demonstrations and arrest 2,000 people at the same time. That is proof that the government is lying."

Whether the movement continues may depend on a balance that Egypt has long contended with: fear that too much freedom can bring chaos that has engulfed neighbors, such as Libya — or the insistence of others who maintain society cannot progress without democratic rights.

"Of course you have a big crowd that is cheering for Sissi because they believe in authoritarian stability…that you can trade in freedom for stability," Luca Miehe said. "But the repression that these people that went to the streets on September 20, that these people had to expect is unmatched…I don't think people will stop requesting their freedoms."

But external support for those freedoms has been underwhelming.

Despite limited condemnations from Europe and the United States, the US is going ahead with a $1.3 billion (€1.2 billion) military aid package, while Egypt has been Germany's second-largest customer of arms so far this year.

European countries view Egypt as a partner in stopping refugees migrating from across Africa to Europe. The US views Egypt as an important ally in the Middle East that has normalized relations with Israel and supports Saudi Arabia in its war with Yemen.

"Various US governments have spoken many times about American values. But in the end they only care about American interests, whether they are implemented by a military dictatorship or by religious fascists,” al-Aswany wrote.

"So we Egyptians should not expect any Western government to fight for us. The fight for freedom is our own fight alone, and if we win, the world will hear us and respect our will."

Alaa Abdel-Fattah was detained while on day release, having served five years in jail for staging an illegal protest in 2013. Fresh anti-government protests earlier this month prompted a harsh response from authorities. (29.09.2019)