Egypt has sentenced more than 100 Muslim Brotherhood supporters to 10 years in prison over demonstrations against the overthrow of President Morsi. Meanwhile, campaigning for presidential elections is underway. 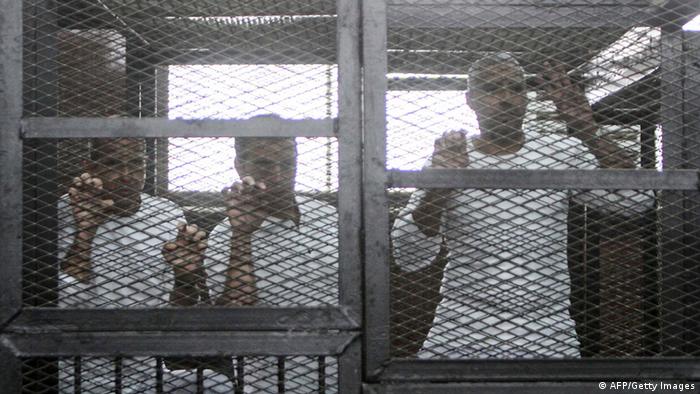 Cairo Criminal Court handed down the 10-year sentences on Saturday to 102 of the 104 defendants on trial. Two other Brotherhood supporters received seven-year sentences.

Most were tried in absentia, with just 35 appearing in court.

The defendants were charged with killing and inciting violence during protests against the military ouster of Islamist President Mohammed Morsi in July.

It was the latest of several mass trials involving Brotherhood supporters and members, thousands of whom were rounded up in the aftermath of Morsi's removal.

They are part of an ongoing crackdown against Morsi's Muslim Brotherhood party, which has been declared a terrorist organization by the military-backed government.

Earlier this week another court sentenced the leader of the Brotherhood and 682 supporters to death on charges of rioting and torching a police station in the southern city of Minya in August.

Egypt is due to hold presidential elections on May 26-27. Former army chief Abdel Fattah al-Siis, who led the ouster of President Morsi, is widely expected to win.

His only opponent, #link:17578841:leftist politician Hamdeen Sabahi, kicked off the election campaign on Saturday from the southern city of Assiut.

He pledged to "achieve democracy, development and freedom for each Egyptian."

A leading left-of-center politician has filed the required documentation to run in Egypt’s presidential election. Hamdeen Sabahi is seen as the main rival to former army chief Abdel Fattah al-Sissi. (19.04.2014)