An Egyptian court has fined former President Mohammed Morsi and sentenced him to three years in prison. Separately, human rights lawyer and activist Mahinour el-Masry was given a two-year prison sentence. 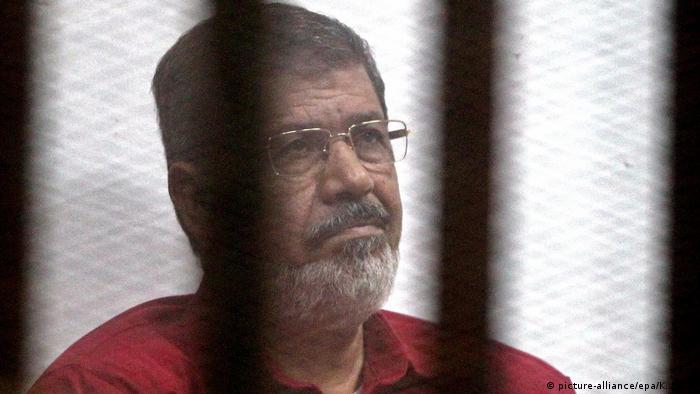 An Egyptian court sentenced former President Mohammed Morsi to three years in prison on Saturday during a court session broadcast on national television.

The former Islamist president was sentenced, along with 19 others, for insulting the judiciary. The case involved 25 defendants including Alaa Abdel-Fattah, a prominent human rights activist, and Amr Hamzawy, a political commentator. Abdel-Fattah and Hamzawy were each fined 30,000 Egyptian pounds (about $1,700/€1,400).

Hamzawy is living in exile, but Abdel-Fattah is serving a five-year sentence for participating in an illegal demonstration in 2013.

All the defendants are said to have insulted the judiciary with a variety of statements made on TV, radio, social media and newspapers, comments the court said had incited contempt toward the court and judiciary.

Abdel-Fattah, a software engineer by profession, is an outspoken blogger who has been in and out of prison in the years since President Hosni Mubarak was ousted in 2011. He opposes general-turned-president Abdel-Fattah el-Sissi and also protested Morsi's rule.

In another verdict handed down on Saturday, Mahinour el-Masry, a prominent human rights lawyer and activist, was sentenced to two years in prison for participating in an illegal protest against the government's decision to transfer two key Red Sea islands to Saudi Arabia. The 2016 agreement sparked widespread protests across Egypt.

Morsi was overthrown in 2013 following mass protests against his one-year rule.

Since then, Morsi has been on trial for a host of charges, including espionage and conspiring with foreign organizations.

His Muslim Brotherhood group has been outlawed and Morsi is now serving a 25-year sentence, ostensibly for spying for Qatar. He was previously given a 20-year sentence for the killing of protesters in December 2012.

After Morsi was overthrown, Egyptian authorities launched a brutal crackdown on Islamists, throwing thousands in prison. Secular and liberal activists were also jailed.

In 2013, Sissi's regime passed a law banning all unauthorized demonstrations.

An Egyptian court has sentenced 28 people to death for their involvement in the murder of the country's chief prosecutor in 2015. Hisham Barakat was killed in a car bomb after jihadists called for attacks on judiciary. (22.07.2017)