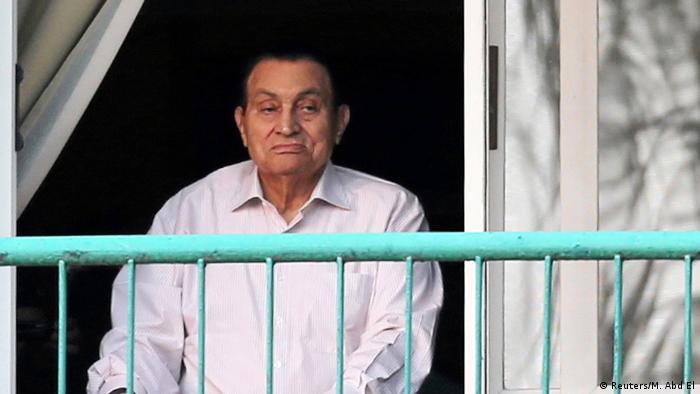 A file photo from 2016 shows Mubarak waving to supporters from a Cairo military hospital.

Mubarak was deposed in 2011 after 18 days of mass protests against his rule broke out across Egypt under the banner of "bread, freedom, and social justice." After initially serving time in Egypt's Tora prison, he was then transferred to more comfortable quarters in a military hospital in the suburb of Maadi.

Now, according to his lawyers, Mubarak has returned to his villa in Cairo's wealthy Heliopolis neighborhood, the charges against him having been dropped or elapsed for time served.

During his incarceration, much has happened but little has changed. The country has gone through two interim heads of state and two presidents: the Muslim Brotherhood's Mohammed Morsi, and Abdel Fattah el-Sissi, the general who deposed him in a military coup in 2013 and rules to this day.

But with a crippling economic crisis and a rising cost of living many are still deeply dissatisfied with the order of things and thousands of people, including many young activists who took part in the 2011 protests, are still in the country's jails - unlike 88-year-old Mubarak.

The Mubarak years were seen as a time of stagnation and cronyism and the trials that followed the uprising and resulted in his detention were watched attentively by the whole country. Mubarak's release, however, was a quiet affair announced in a statement by his long-serving lawyer Farid el-Deeb.

More than 800 people are believed to have been killed in the 2011 uprising, and Mubarak was previously convicted over the deaths of 239 of them before the sentence was overturned at appeal.

Many believe Mubarak walking free displays an obvious lack of justice. "This is of course bad news for all the families of the victims who were killed during the revolution," said Abdul Rahman Gad of the Egyptian Coordination for Rights and Freedoms (ECRF), a civil and political rights organization.

"It shows that the current regime doesn't know the meaning of justice, in fact it has done everything possible to eliminate the 2011 revolution, as is clear in the rulings issued by the judiciary against the supporters of the revolution and the locking up of so many of them in prison for many years," Gad told DW.

Enquiries not over, but detention may be

Mubarak is not yet completely in the clear: Investigations are set to reopen into whether he illegally received gifts from the state-owned Al-Ahram media organization during his reign. Charges in that case were dropped last year, but prosecutors are reopening the file and Mubarak remains subject to a travel ban.

However ECRF's Gad believes that Mubarak regaining his freedom shows just how similar Egypt's new authorities under General el-Sissi (who served as head of military intelligence under Mubarak) are to the old regime, and that there's little chance he will return to detention.

"This regime is the same ideologically as the previous dictatorship: It claims to be fighting terrorism, but in truth it fights spread of the demand for democracy and human rights, and that is clear in the many repressive laws passed over the past three years," he said. 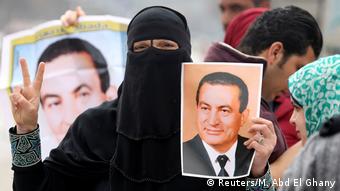 Under Sissi, repression has reached levels that far surpass those of the Mubarak period. Tens of thousands have been imprisoned - often in unofficial facilities where conditions are far harsher than in official prisons - and allegations of torture by the police and army have risen markedly.

In 2016 alone the Nadeem Center, a well-regarded human rights NGO, documented more than 800 reports of torture by state personnel, nearly 1,000 forced disappearances and more than 100 deaths in custody.

Egypt faces deep structural problems in the economy that have recently led to a sharp rise in inflation and a cost of living crunch, particularly since the government adopted a new International Monetary Fund-supported austerity budget last year. Under the program the prices for two key commodities, sugar and cooking gas, were hiked just last month.

According to Nadine Sika, assistant professor of political science at the American University in Cairo, the relative lack of public outcry against Mubarak's release is evidence of how difficult the times are, and how sterile Egyptian political life has become.

"The economy is a shambles and terrorism has been on the rise - people seem to be more concerned with their daily well-being than with Mubarak's release," Sika told DW. "Plus the Egyptian media has made tremendous efforts to delegitimize young activists and put responsibility for the country's instability on their shoulders."

Over the past few years the political discourse in Egypt, at least among the establishment, has often denigrated the activists who mobilized for the 2011 uprisings as troublemakers or even "agents" of the West. "Even Mubarak's family is now treated positively in public life," Sika said. "Whether there will be a come back or not, we are not sure, however, public resentment against Mubarak and the former elite seems to be decreasing."

How Bangladeshi migrants end up in Cyprus

Verdict in Paris terror trial: A further step in the healing process