Cairo and Doha have exchanged pledges to end their three-year rift and resume ties, according to Egypt's Foreign Ministry. Several allies of Saudi Arabia are in the process of reestablishing relations with Qatar. 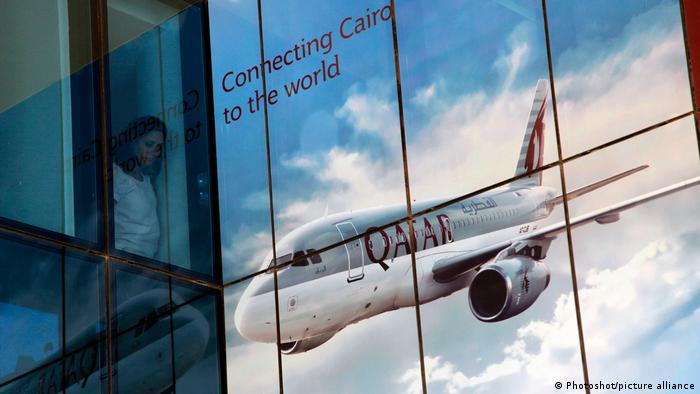 Cairo: Outside a ticket office for Qatar Airways

Following recent Gulf summit efforts, on Wednesday Egypt and Qatar sent each other official notifications of their intent to resume diplomatic ties. A Saudi-led bloc of Arab countries had previously isolated Qatar for grievances including allegations that the government has backed regional militants.

The countries "agreed to resume diplomatic relations," Egypt's Foreign Ministry announced, echoing intimations last week by Qatar's government that it, too, desired normal relations as the nation prepares to host the football World Cup in 2022.

On Monday, EgyptAir flew passenger flights to Doha and back. On January 11, Qatar Airways made a flight to Saudi Arabia, with plans to resume links to Egypt's Mediterranean city of Alexandria on January 25.

The moves further erase a boycott imposed by a Saudi-led bloc, including Egypt and Bahrain, in 2017 on energy-rich Qatar on allegations that the government has supported militants in neighboring countries, a charge Doha denied.

Egypt had urged Qatar to cut ties with the Muslim Brotherhood, outlawed in Egypt and allied to former President Mohammed Morsi, who was ousted in 2013 by Abdel Fattah el-Sissi, the army chief at the time and now the president himself.

Egypt and the United Arab Emirates (UAE) are also at odds with Qatar and Turkey in Libya, where the governments back opposing sides in the civil war.

On January 16, the Saudi government announced that it expected to reopen its embassy in Qatar within days and resume full diplomatic relations.

Airspace reopenings have also been signaled by the UAE and Bahrain in recent days.

The end of the boycott was publicized by the Trump administration as part of the departing president's bid to forge a united front against nuclear aspirant Iran.

Qatar - Millions for Islam in Europe

Is Qatar trying to gain influence in Europe by funding a charity NGO? A whistleblower has provided two French journalists with thousands of secret documents that belong to the "Qatar Charity."