ECB pulls plug on eurozone stimulus – What does it mean? | Business | Economy and finance news from a German perspective | DW | 14.06.2018

The European Central Bank wants to end its €2.4 trillion bond-buying program at the end of 2018, calling time on a policy that is credited with reviving the eurozone but may come too soon for some debt-laden countries. 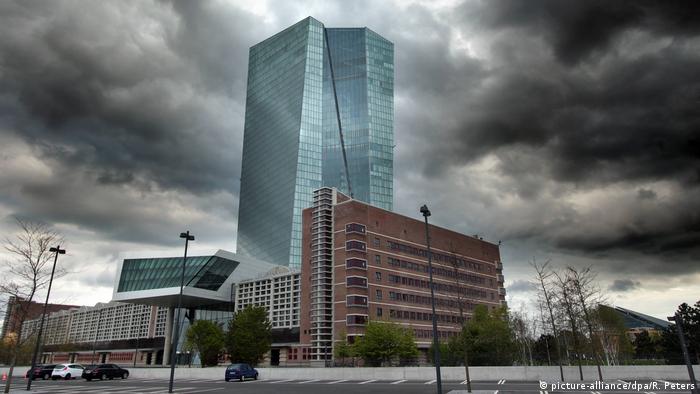 The Frankfurt, Germany-based central bank for the euro area announced on Thursday that it would end its unprecedented asset purchases by the close of the year, signaling at the same time that the move would not mean rapid policy tightening in the coming months.

The bank's governing council had decided to halve the monthly purchases from €30 billion to €15 billion ($35 billion to $17 billion) from October until late December, it said in a statement, but would leave the ECB's main refinancing rate unchanged at zero percent and the rate on deposits held with the lender at minus 0.4 percent.

"The Governing Council expects the key ECB interest rates to remain at their present levels at least through the summer of 2019, and in any case for as long as necessary to ensure that the evolution of inflation remains aligned with the current expectations of a sustained adjustment path," the ECB said.

The macroeconomic conditions in the 19-member bloc are clearly conducive to ending the stimulus program. Eurozone growth was at its highest since 2007 in 2017, at 2.3 percent, while unemployment fell to its lowest levels in 10 years, 8.5 percent, this March. But the situation is not unambiguous and the effects will not be felt equally among all members.

The European Central Bank's (ECB's) primary goal of reviving moribund inflation to 2 percent, for example, was only hit this May after several years of pumping a massive €2.4 trillion ($2.8 trillion) of cash via a process of bond purchases known as quantitative easing (QE) into the monetary system. It also came in part due to one-off factors like higher oil prices, whose longevity is uncertain.

"QE was like a shot of morphine into the eurozone sovereign bond market and may have created some complacency among investors and policymakers," Louis Harreau, ECB strategist within Global Markets Research at Credit Agricole CIB, told DW.

So, if the era of cheap central bank cash will be drawing to a close, are the major eurozone economies strong enough to stand on their own and does the recent past offer a glimpse of the near future?

ECB chief Mario Draghi no doubt had in the back of his mind two fateful interest rate hikes in 2011, which aggravated the last sovereign debt crisis (Greece's) in 2010-2012, the first in the eurozone since the 2008 financial crisis.

This was only halted when Draghi implemented a massive program to buy bonds, driving up prices and lowering interest rates — making money cheaper and reviving inflation and thus it was hoped stimulating growth.

Draghi then said in January 2015 the ECB would extend and expand its interventions in financial markets with more mass bond-buying after the previous attempts to hike inflation up to the ECB target of 2 percent failed, indicating insufficiently strong growth impulses in the eurozone.

Since last April, the ECB has been tapering its bond purchases, reducing monthly purchases to €60 billion from €80 billion and halving them to €30 billion from this January.

Draghi, stuck to his line of "patience, prudence and persistence" in April and markets have taken him largely at his word, for the time being.

Draghi also wants to avoid any move that could upset markets, after the sharp selloff when the Fed abruptly announced in 2013 the end of its version of QE.

"The investor base matters as well: domestic investors are usually more stable than foreign ones, especially at times of stress," von Gerich said. "Spain and Italy look vulnerable, but so do France and Belgium, to some extent Portugal as well," von Gerich said.

"The second way to look at it would be via the state of the economy. The weaker the growth outlook, the more vulnerable a country is to higher interest rates," von Gerich said, adding that Italy clearly stands out negatively on this measure.

"A country is also more susceptible to a rise in interest rates, if short-term rates are more commonly used. Short-term rates are used a lot in Finland, Portugal, Ireland, Spain and Italy, at least among household mortgages," von Gerich said.

Finally, as less ECB support leaves a country more susceptible to negative shocks, the risk picture matters a lot as well. "On this front, no other eurozone country has as clouded a political outlook as Italy does. Spain may be suffering from some political uncertainty as well, but the country is committed to the eurozone, its economy is doing relatively well and the alternatives being presented are much less drastic than in the case of Italy," von Gerich said.

All roads lead to Rome

"Italy is the elephant in the room. It has little room for maneuver, given its huge public debt and there are some worries in the market that the new government may be unwilling reduce it," Harreau said.

Italy features in most risk categories and many put most weight on the political outlook.

"It is thus the most vulnerable country to tighter monetary policy in the current circumstances," von Gerich believes.

"Tighter monetary policy would put more pressure on the Italian economy, economic confidence and debt sustainability and would thus also make it even more difficult for the new Italian government to try to implement its key promises. After Italy, also Greece (despite its absence in the purchase program) and Portugal look quite vulnerable, followed by Spain," he said.

President Sergio Mattarella refused to approve the first economy minister proposed by the leaders of the 5-Star Movement and the League. Luigi Di Maio, who leads the web-based 5-Star Movement, Parliament's largest party, has promised to give the unemployed and low-income Italians a guaranteed monthly income, while Matteo Salvini's right-wing League has said it will slash tax rates. Both also want to undo parts of a recent pension reform so Italians can retire younger.

Di Maio and Salvini say spending would be offset by a boost in growth, though UBS has estimated that the fiscal plans of the new government would drive Italy's fiscal deficit to 4.4 percent of GDP, versus 2.3 percent in 2017 and its primary surplus up from 1.9 percent of GDP into negative territory at -3.9 percent by 2020.

According to Eurex, Europe's main exchange for trading derivatives, volume in short-term Italian bond futures was up 33 percent through April of this year compared with the same period in 2017.

"An orderly stop of QE shouldn't have significant impact on eurozone countries, but it will mean one less source of demand for Italian debt," Linda Yueh, economist and author of "The Great Economists," told DW. "But if the politics in Italy trigger a market sell-off, the QE program continuing wouldn't be sufficient to change the situation much."

QE is shorthand for the central bank creating money and using it to buy government bonds or other financial assets on the open market. This lowers the cost of borrowing for all members and in turn makes it easier for eurozone companies, households and states to borrow money, saving them billions on interest payments.

When a bond's yield rises, its price falls, and when a bond's yield falls, its price increases. Bonds that have already been issued and continue to trade on the secondary market must readjust their prices and yields to stay in line with current interest rates. A bondholder can sell their bonds in the open market, where the price can fluctuate, sometimes dramatically.

Credit default swaps (CDS) involve the transfer of risk from bonds between two parties, as a form of insurance against default, a credit rating downgrade, or another negative "credit event." Widely seen as a measure of risk on bond markets.

The idea that the European Central Bank would become so big and powerful was something that its founders did not expect 20 years ago. In fact it has become more powerful the more the monetary union has been threatened. (01.06.2018)