Hours after a third case of Ebola was reported in the Congolese border town of Goma, a Rwandan minister said the country's border with the DRC had been closed. Rwanda's Health Ministry later denied the closure. 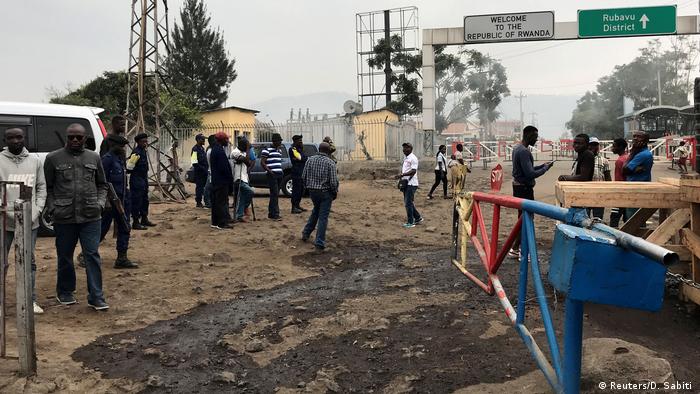 Rwanda's health minister said Thursday that the country had not closed the border with the DRC after fresh cases of Ebola were reported in the Congolese border city of Goma.

"The border was never closed and it is not closed," Diane Gashumba said as she sat next to the state minister of foreign affairs, Olivier Nduhungirehe.

Hours earlier, Nduhungirehe told reporters that the border had been shut, sparking criticism from the DRC government.

The conflicting statements on the Rwanda-DRC border came after authorities confirmed the third and fourth case of Ebola in Goma. The disease broke out in the city last month, when an infected preacher arrived and preached at seven churches, regularly touching worshipers. He died after leaving the city.

The second case, reportedly unconnected to the first, was a gold miner who arrived at his family home from the provinces.

The disease has been transmitted to at least one of his 10 children and his wife before he died.

There are at least 12 more suspected cases in and around Goma.

Goma, an impoverished city of 2 million people, is a major transport hub in the DRC, and the arrival of Ebola has long been feared by health experts. The densely packed, highly mobile population will make containing the highly contagious and deadly disease difficult.

More than 57,500 people travel between Goma and the small Rwandan city of Gisenyi every day.

More than 1,800 people have died from the disease in eastern DRC in the past year. In June, the disease jumped the border into Uganda.

The virus casues fever, vomiting and severe diarrhoea, often followed by kidney and liver failure, internal and external bleeding. It is transmitted through contact with infected body fluids. There is no cure, but an experimental vaccine has shown success.

The WHO has not declared the current outbreak an international emergency. But neighboring countries considered at risk have upped their preventative measures after the virus spread to Uganda earlier this week. (15.06.2019)

The number of suspected Ebola cases in eastern Democratic Republic of Congo has risen to 73. The fact that it broke out in the middle of a conflict area has made responding to it more difficult. (16.08.2018)