The Democratic Republic of Congo has reported its first case of Ebola in the eastern city of Goma. The presence of the virus has raised concerns of an outbreak in the densely populated area along the Rwandan border. 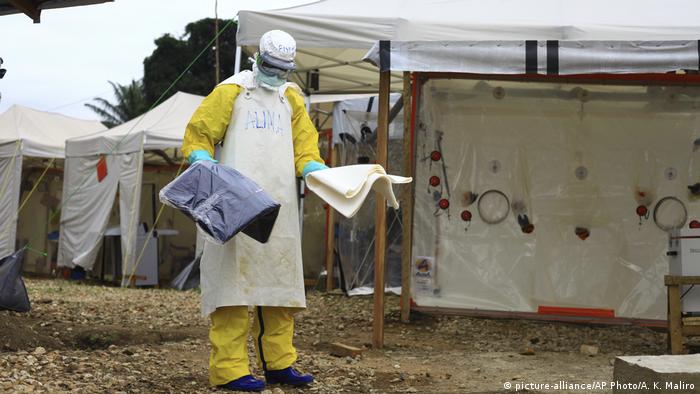 The Congolese Health Ministry on Sunday confirmed the first reported case of the Ebola virus in Goma, a city of roughly 1 million people.

DR Congo is in the midst of an Ebola outbreak that began last August and has already become the second-deadliest in the country's history, infecting nearly 2,500 people and killing more than 1,600. The regional capital of Goma, which borders Rwanda, has been preparing for Ebola's possible arrival for months, setting up hand-washing stations and instructing mototaxi drivers not to share helmets.

The outbreak that began last year originated more than 350 kilometers (217 miles) north of Goma, but the virus has been gradually moving south. Health officials have had difficulty containing Ebola in the country's more rural areas, where regional violence and a distrust of authorities has made work particularly challenging.

The infected individual with the case reported on Sunday contracted the virus in Butembo, 200 kilometers to the north, where he interacted with Ebola patients. He developed symptoms last week before taking a bus to Goma. He then went to a clinic in the city and tested positive for Ebola.

"Due to the speed with which the patient has been identified and isolated, as well as the identification of all bus passengers from Butembo, the risk of spreading to the rest of the city of Goma remains low," the Congolese Health Ministry said.

Read more: Ebola puts 'WHO between a rock and a hard place'

Ebola causes hemorrhagic fever, diarrhea and vomiting. An outbreak of the virus in West Africa between 2013 and 2016 killed more than 11,000 people.