Declaring a global health emergency could galvanize aid to fight the Ebola epidemic in the DR Congo. It could also make the job of containing the virus much more difficult. The WHO's decision proved controversial. 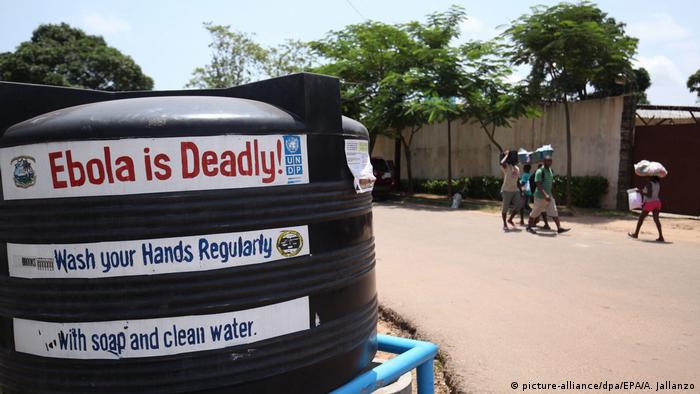 Criticism rained down on the World Health Organization (WHO) when it decided on the weekend not to declare a global health emergency, despite the spread of Ebola from the Democratic Republic of Congo into Uganda. WHO spokesperson Tarik Jasarevic told DW that the panel of experts who recommended that no emergency be declared found that the situation did not meet the criteria for a Public Health Emergency of International Concern (PHEIC). "However the committee noted that is still a very concerning situation and that WHO should continue to put in place necessary measures to try to contain the outbreak," he said.

NGOs working on the spot were quick to point out that the failure to declare a global health emergency would have a negative impact on donations to fight the epidemic. Paul Spiegel, a physician and director of the Center for Humanitarian Health at Johns Hopkins Bloomberg School of Public Health in the US, says the situation is complicated. "I think it probably would have made sense to call a PHEIC. That said, there is always a technical decision and then there is also a political decision." WHO is well aware that declaring an emergency has significant financial implications for a country. Flights, transports and the free movement of people would be severely affected. "The question is, would this exacerbate an already extremely difficult situation for the population in Kivu and the border area with Uganda? This quandary puts the organization "between a rock and a hard place," Spiegel said. 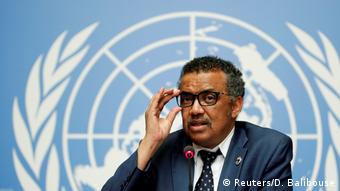 WHO director general Ghebreyesus is calling for funding

Jasarevic points out another danger. "We have seen in the past that some countries may go beyond WHO recommendations and install some restrictions and this is something that we would not like to see," he said. "It is important to go to the communities to put in place measures like vaccination, contact tracing, epidemiological surveillance, safe burials, treatment of patients, community engagement, and for that we need open borders, we need airlines who fly, so obviously we are not recommending any travel or trade restrictions," Jasarevic explained.

Concerning the risk of losing donations because of a failure to call an emergency, Jasarevic is clear: "Declaring a PHEIC is based on other criteria than funding. The process in itself is not meant to be fundraising."

Nevertheless, WHO has repeatedly stressed the dangerous lack of funding in the present crisis. The organization has been calling on the international community to at least make good on its funding promises to effectively contain an epidemic which has already killed 1,400 people and threatens to spread to other countries. According to Director General Tedros Adhanom Ghebreyesus, as of yet WHO has received $43.6 million (€39 million) in donations, short of the $54 million promised. "This shortage in funding may affect operations, especially on preparedness levels in neighboring countries," Jasarevic said. 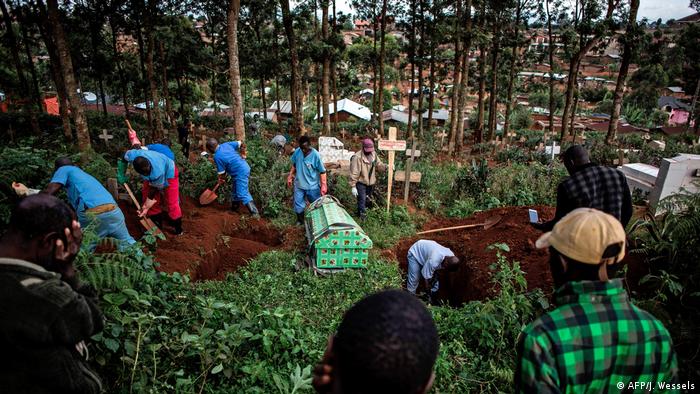 1400 people have already died in the current outbreak in DRC

Spiegel agrees that the international community must step up help to contain the spread of the deadly virus. "Not only in the US but in many countries right now there is much more of an inward-looking focus. Populism and everyone putting their country first are having an impact on governments' willingness to put in money, not just in Ebola," the researcher said. In 2014-2016, the US for example, came up with a billion dollars to help contain the Ebola epidemic in West Africa, according to Spiegel. But lack of interest is not the only problem. "Maybe [the epidemic] is not getting the attention it deserves, because it is in a part of Congo that's been troubled for so long," the researcher said.

The biggest problem in the DRC is security, WHO agrees. "What is really important to us is to have a politically secure and enabling environment to have access to the communities," Jasarevic said, referring to the ongoing armed conflicts in the eastern region of Kivu.

Spiegel says WHO has also failed to gain the trust of local populations, which looks askance at any kind of meddling by the central government in the area. "WHO defers to the [Kinshasa] government and the problem here is that the government is not trusted in the Kivus," the expert told DW. "It would have been interesting to try different ways of coordination and leadership because of this specific situation," Spiegel said, while recognizing that this is another dilemma for the organization: "Ultimately, particularly for WHO, given its mandate, if the government says 'we're leading,' it's very difficult for WHO to say 'No, maybe you shouldn't.'"

The daily number of new Ebola cases has tripled in recent months, according to aid organizations. Local distrust and armed groups have hampered a response to the world's second-largest Ebola epidemic. (05.06.2019)