65 years ago, DW was founded to offer multilingual news to foreign audiences abroad and to promote democratic values. In our anniversary year, we are launching DW Freedom, an initiative encouraging freedom of speech.

“Freedom of speech and media freedom are the foundations of our daily work,” said DW Director General Peter Limbourg. “It is the right of journalists to do their job. Like it is the right of artists to express themselves. As it should be the right of everybody on this planet to speak their minds freely, without fear of harassment or arrest.” 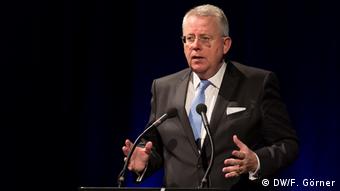 Highlighting the topics of free speech

DW Freedom is an online and social media platform which highlights the topics of free speech and media freedom around the world. On the website dw.com/freedom, on Twitter (@dw_freedom), and Facebook (DW Freedom) users will find reports by and interviews with activists, academics, artists, cartoonists, hackers, and authors from all corners of the world. Digital privacy, secure communication and data protection, critical topics for journalists and free speech advocates, will also be discussed. User can engage in dialogue on social media and contact the DW editors directly.

Publishing and explaining content from all DW editorial teams and DW Akademie projects, DW Freedom strives to heighten DW’s coverage of complex issues surrounding free speech and media freedom. It sheds a light on – sometimes forgotten – crises, victims of human rights violations and initiatives striving to improve the current situation and fosters a greater debate on these issues.

DW Editor-in-chief Ines Pohl: ”Our journalists report on human rights in 30 languages. We believe that freedom is the ultimate human right, whether it concerns freedom of speech, of the media, of assembly or freedom of religion. So all of us at DW are supporting this important project whole-heartedly.”

In addition to providing news and information, Deutsche Welle also supports freedom of expression and media freedom through DW Akademie’s activities in 50 countries around the world.

From now on, DW Freedom will help promote the stories behind these free speech heroes.