Dutch police have arrested another suspect in a shooting that killed three people in Utrecht. The attack, allegedly carried out by a Turkish-born man, could play a major role in provincial elections. 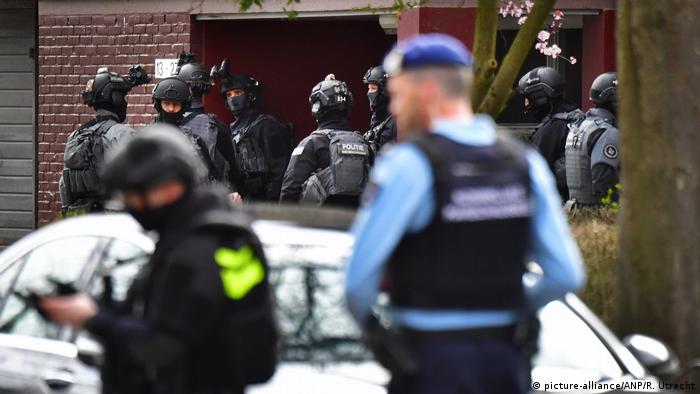 Dutch police on Wednesday said they had arrested a new suspect in a shooting that killed three people and injured seven others on a tram in the city of Utrecht, as they investigated whether there was a terrorist motive behind the attack.

Officers from a specialized arrest team detained the 40-year-old man in Utrecht on Tuesday and released two other men that had been detained earlier, said police spokesman Joost Lanshage.

A spokesman for public prosecutors, Ties Kortmann, said that the investigation is probing hte motive of the suspects and into the possible involvement of the man arrested on Tuesday. "We are looking at the role of the new suspect," he added. The suspect's identity has not been released.

The alleged shooter, 37-year-old Gokmen Tanis, remains in custody and prosecutors have until Friday to question the Turkey-born suspect. Tanis will then appear before an investigating judge who could extend his detention.

Police said a terrorist motive was being seriously considered after a note was found in the getaway car — a red Renault Clio that the suspect had carjacked before the attack and used to flee the scene afterwards. They had also found a firearm after his arrest.

Police appeared to rule out reports that the shooting was due to a family dispute, after Turkish media outlets reported such a connection on the day of the shooting.

"Our investigation has established no link between the main suspect and the victims," the statement added.

Pre-election polls showed Prime Minister Mark Rutte's center-right coalition would likely lose its majority in the Senate. The attack is expected to also lead to the strongest-ever showing by two populist parties.

"It's 100 percent clear that the coalition will book major losses," pollster Maurice de Hond said in an election preview.

A snap poll conducted after the shooting showed that determination to turn out and vote had grown among populists, while support for traditional parties remained lackluster.

Hond, drawing on the events of 2002, when populist Pim Fortuyn was assassinated just before national elections, forecast a combined result of up to 25 percent for populists.

"It will be a close call as to whether the coalition plus even just one other opposition party" will be able to command a majority after the new Senate is seated in May.

The Dutch right-wing scene has been dominated by the Freedom party of Geert Wilders for a decade and has been transformed in the past two years by the rapid growth of a second populist party, The Forum for Democracy.

The Forum for Democracy has followed the lead of US President Donald Trump and emphasized "Netherlands First" cultural and economic policies.

The party's leader, 36-year-old Thierry Baudet, shocked other political parties this week by blaming the government for the Utrecht attack on the same day as the shooting, while others had suspended campaigning.

A 'New York Times' investigation found that credit cards were used to fund the majority of a decade's mass shootings. In some cases, the perpetrators used credit to buy weapons they could not otherwise have afforded. (24.12.2018)