A married couple was attacked by a group of young men while holding hands at night in the city of Arnhem. Straight Dutch men have launched a campaign to hold hands in solidarity. 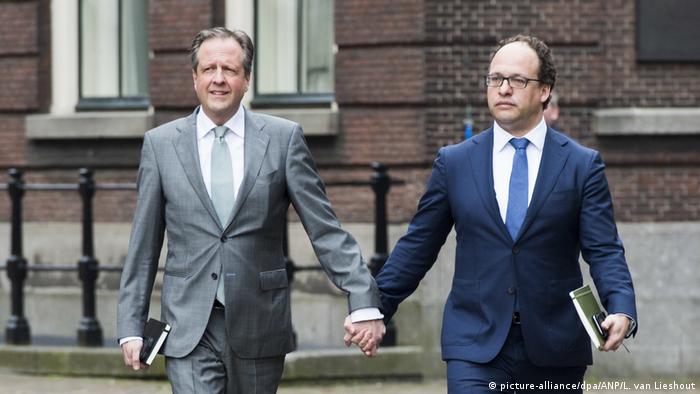 From politicians to police to priests, heterosexual men from the Netherlands have been showing their opposition to anti-LGBT violence by holding hands in public. These displays have taken place not only at home but in the UK, the US and Australia in solidarity with a gay couple that was assaulted in the city of Arnhem over the weekend.

Under the hashtag "allemannenhandinhand" (all men, hand in hand), the campaign began at the suggestion of media entrepreneur Barbara Barend.

After the news of the attack in Arnhem spread, Barend asked on Twitter for "all men (straight and gay)" to "please walk hand in hand."

The first major figures to take up the call were lawmakers Alexander Pechtold and Wouter Koolmees (pictured above) of the D66 party, who held hands on their way to a political meeting in The Hague.

Their actions were soon echoed by the Dutch mission to the United Nations in New York, the Dutch Embassy in London and in Canberra:

The violence that sparked the event has shaken the Netherlands, the first nation to enshrine marriage equality and where the crime rate is relatively low. According to a police statement, married couple Jasper Vernes-Sewratan and Ronnie Sewratan-Vernes were assaulted on Sunday night at around 4 a.m. local time. The two men, 31 and 35, were set upon by a group of teenagers with box cutters. The pair was injured and had some of their teeth knocked out.

The six young men, four of whom are now in custody, were between the ages of 14 and 20, and according to the victims, verbally and then physically attacked them because they were holding hands.

Dutch news agency ANP wrote, however, that one alleged perpetrator disputes this version of events. Gerald Roethof, a lawyer for one of the underage suspects, said that his client claims he and his friends were hit first.

"We don't usually hold hands in public," Ronnie Sewratan-Vernes told Dutch news outlet NOS, "for the very reason we don't want to provoke people. But we'd had a nice evening, it was late and we thought we were alone."

"We think it is quite normal in the Netherlands to express who you are," Alexander Pechthold said.