Dutch Green-Left Party tackles Geert Wilders, one door at a time | News and current affairs from Germany and around the world | DW | 02.03.2017

The party of Trudeau look-alike Jesse Klaver is trying to woo undecided voters two weeks ahead of the elections. Right-wing populist Wilders dominates the debate while Premier Rutte keeps fighting for political survival. 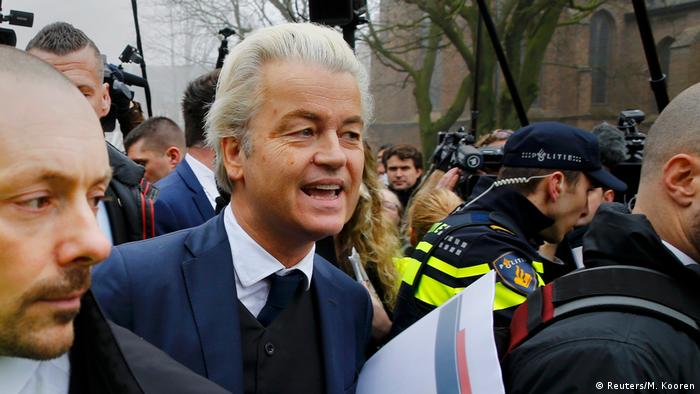 There's no doubt that the young Groen-Links (Green-Left) party leader would win any Justin Trudeau look-alike contest. And his rhetoric seems to be taken straight out of Barack Obama's mouth: "Our message relies on hope and change. I believe in hope and ideals, and many are - just like me - tired of people like Geert Wilders who pit folk against one another. We want to live together," says Jesse Klaver, talking to DW. 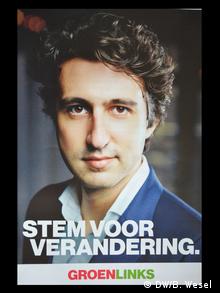 He is one of the few Dutch politicians who attack Wilders openly, and he has catapulted his small party - consisting of a mere four delegates - to third strongest in parliament, according to the latest opinion poll.

In contrast to Wilders, who now runs his campaign virtually only, having cancelled all public appearances due to alleged safety concerns, the Greens approach eligible voters directly. Defying a drizzle, city council member Lene Grooten knocks on one front door after another in Amsterdam's Piet-Mondrian-Straat. The city's Slootervaart district is the home of many migrants, but also of young Dutch people. Some call this neighborhood a deprived area; however, everything is neat and tidy, there's no trace of a social ghetto. A number of local boys play soccer on a pitch, the general mood is one of relaxation.

Almost every resident finds time to have a chat with Lene. "Most people here are undecided. And many inform themselves on the internet only. This is why we go out to talk to people directly. We believe that this is important," says the council member, conceding that the political climate is a difficult one: "With Brexit, we need changes in Europe. We must make the EU more democratic and bring it closer to the people." Her party leader knows how this could work: "I'm a European, I love Europe. But we can't keep talking about the economy only. Europe is an ideal, our safety and our living together are at stake." Jesse Klaver can display passion, too.

By contrast, the first public debate between Prime Minister Mark Rutte and eight other party leaders, broadcast on Dutch radio, is pretty much down-to-earth. Christian Democrat Sybrand Buma wants to reestablish compulsory military service because parents - he believes - don't educate their children properly these days. The head of government declines - the costs would be too high, and it's not necessary anyway.

The representative of the 50Plus party, Henk Krol, emphatically calls for lowering the retirement age back to 65 years - something Rutte calls too expensive as well. Krol stands his ground, but since he operates with incorrect figures, his party has by now lost half of its seats according to polls. The Dutch are very meticulous in this respect. Apart from that, health system, labor market and limited contracts are subject to discussion. Temporary employment is a trend that worries people here, like everywhere in Europe. The tone of the debate is polite and civilized. 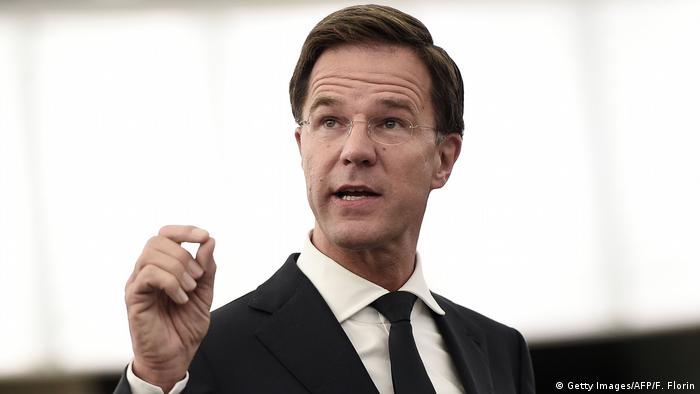 PM Rutte has left Wilders behind in polls

Wilders' victory is not certain

The man with the yellow mop of hair, however, overshadows everything like a phantom. Geert Wilders is no versatile debater, and he knows that he can only lose in discussions with Premier Rutte and his counterparts. He has suspended all public appearances, ostensibly because of safety concerns. The right-wing populist tries to influence public opinion Trump-style, via Twitter, and he is pleased with the high level of attention he has achieved with just a brief outing in Rotterdam's Spijkenisse district.

On this occasion, he called Moroccans "scum"in front of the cameras of the international press. As to the rest, he repeated his now-familiar slogans: "We want to return the Netherlands to the Dutch (…) In the face of open borders, they feel they've lost the key to their own front door. We want to change that and reclaim national sovereignty (from the EU)." Geert Wilders thrives on provocation, and he has obviously learnt a lesson from the Brexit campaign. Currently, however, he's on the decline: his poll ratings have dropped and Mark Rutte's Liberals have left him behind. An election victory of the PVV ("Partij voor de Vrijheid"/"Freedom Party") is, therefore, not certain. 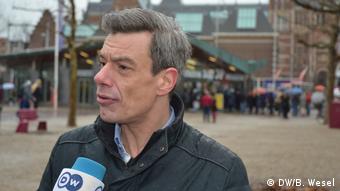 Remco Rhee: "For all those who are frustrated by politics in our country"

For the undecided: the party of the non-voters?

Remco Rhee is moving across Amsterdam's Museumsplein like a humming top. This Saturday night, he wants to win over as many people as possible to the most eccentric idea in Dutch politics: the party of non-voters (Partij voor de Niet-Stemmers). Rhee is a gifted communicator. Almost all passers-by listen to his explanations of a party "concept" that includes leaving every seat won in parliament vacant and that involves no policymaking whatsoever: "This is for all those who are frustrated by politics in our country and who, by voting for us, want to send out a signal that they disown things as they are now."

Rhee's appeal is directed at protest voters, too, who might vote for Wilders otherwise. But his denial of politics in its current form, manifesting itself through absence and empty seats in parliament, appears to be little more than a philosophical concept. It is a signal, however, for the already fragmented party environment of the Netherlands, where consensus had ruled for many years - a consensus that seems way out of reach today.