Just two weeks ahead of the Dutch election, Geert Wilders, leader of the right-wing populist Party for Freedom, has slipped into second place. The vote will be the first among three of the EU's founder members this year. 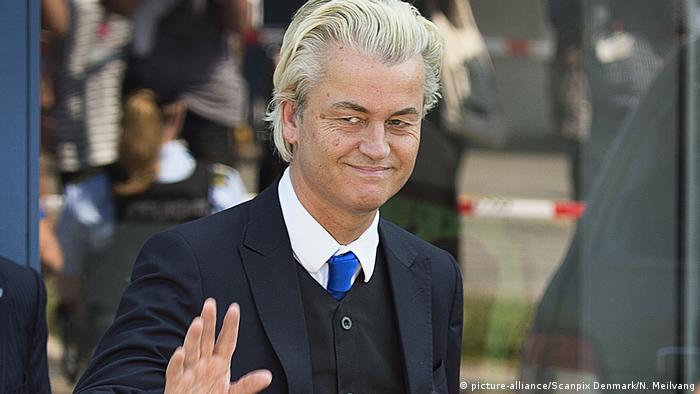 According to the Peilingwijzer poll, published Wednesday, far-right party leader Geert Wilders has fallen behind the conservative VVD party of Prime Minister Mark Rutte for the first time since November 2016.

Anti-Islamic and euroskeptic Wilders is now on 15.7 percent, while Rutte's VVD leads him on 16.3 percent.

With its key campaign promises including a ban on Muslim immigrants, the closure of all mosques in the Netherlands and a Brexit-styled departure from the EU, the Party for Freedom has established a strong supporter base with Holland's anti-immigrant, anti-EU voters.

Launching his election campaign last month, Wilders - who was convicted in December of inciting hatred - showed no sign of letting up his racist rhetoric, describing Holland's Moroccan population as "scum."

Days into his campaign, however, Wilders - who is constantly escorted by his own personal bodyguards - announced that the PVV had suspended public events indefinitely. The decision followed the arrest of a law enforcement agent for leaking sensitive information to a criminal organization.

Authorities, however said the right-wing politician's safety had not been compromised by the security breach.

"What we know up to now is that Wilders' safety was not in question," said Dutch police chief Akkerboom.

Scheduled to take place on March 15, the Dutch parliamentary election will mark the first of three elections among European Union founder members this year.

Like the PVV, right-wing populist parties in both France and Germany are hoping that concerns over national security and immigration will help them to make electoral gains that could reshape Europe and its politics.

However, even if Wilders were to claim election victory on March 15, the far-right leader is unlikely to be able to found a coalition. Almost all opposition parties have ruled out forming a coalition with him.