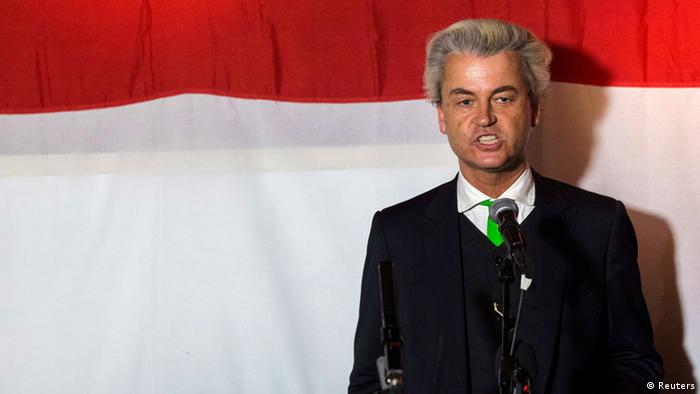 "Very disturbing news. The Freedom Party is suspending all public activities until all facts in connection with the investigation are known," Wilders said in a tweet.

Weeks ahead of a general election, Wilders' party has witnessed growing support across the country, according to polls.

His Freedom Party is expected to capture up to 28 seats in the 150-seat lower house in a neck-and-neck race with Prime Minister Mark Rutte's Liberals. Any Dutch government, however, is liable to be comprised of a coalition of centrist parties - as Wilders is likely to fall well short of a majority and is unlikely to find willing partners elsewhere in parliament.

The right-wing lawmaker has courted controversy in the past, with a court finding him guilty of inciting hatred, although Wilders managed to avoid any penalties from the conviction. He has denied culpability and vowed to appeal the ruling.

The Netherlands' far-right populist party is currently leading in the polls ahead of a general election. While it’s unlikely to be part of the next government, many people fear its ideas will be implemented. Thessa Lageman reports from The Hague.

Under the auspices of the Freedom Party, the 53-year-old politician has promised to ban Muslim migrants, close mosques and criminalize the sale of Qurans, Islam's holy book.

Safety 'not in question'

However, authorities said the right-wing politician's safety had not been compromised by the security breach.

"What we know up to now is that Wilders' safety was not in question," said Dutch police chief Akkerboom.

"This man didn't belong to the so-called 'inner circle,' but he did have important information and we don't want to have any risks," he added. The police chief also confirmed the suspect agent had Moroccan roots.

Security has risen as a topical subject in the run-up to key elections across the EU after terrorist attacks on European soil in the past two years, including in Berlin, Paris and Brussels.

Coronavirus: UK to end nationwide lockdown, go back to tiered system 26m ago