Just five months into 2015, both Iran and Saudi Arabia have executed record numbers of people. While the trend shows no sign of slowing, Western condemnation is barely audible. 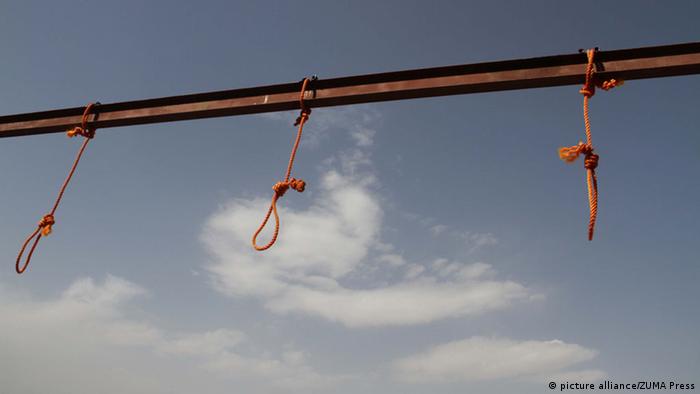 Last year, Iran became the country where two people were killed by the state each week. But with at least 450 executions recorded since the start of 2015, and thousands of people on death row, the country is now on track to top its own average. And with remarkably little resistance.

In May alone, 56 death row prisoners died at the hands of the Iranian authorities. More than half were hung after taking part in a peaceful protest at the country's largest prison, Ghezel Hesar. Gathered in the yard of the jail, which is situated some 20 kilometers (12 miles) from the capital, Teheran, they placed the Holy Koran on their heads and held up a banner appealing to Supreme Leader Ali Khamenei to reduce their sentences.

But that is not what happened. "After the gathering, prison officials threatened to kill them all," Mahmood Amiry-Moghaddam of Iran Human Rights (IHR), told DW. Days later, 34 people were hanged. It is not only the en-masse nature of these executions that have alarmed the activist community, but the charges that seal their fate. 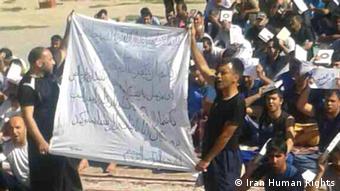 Thirty-four were killed at Ghezel Hesar prison for their protest

The majority of those sent to the gallows in Iran - the noose being the nation's weapon of choice - are convicted of drug-related crimes. But the charges, Amiry-Moghaddam said, are often tenuous.

"We have conducted a lot of interviews with prisoners on death row, and there are many reports of confessions under torture, of no access to lawyers," he said, adding that the trials are held behind closed doors and that the accused do not have the right to appeal.

Although international law decrees any country carrying out the death penalty should only use it for what are deemed "most serious crimes," Iran's anti-narcotics legislation provides for the execution of those found manufacturing, trafficking, trading or holding five or more kilograms of certain drugs, including opium. For heroin or morphine, possession of just 30 grams can result in death.

Even those lenient rules, Amiry-Moghaddam said, are stretched beyond recognition. "If there are five people in a car and the police find some drugs, all those people can be sentenced to death," he said.

He said, the same applies if one person is visiting another's home when the police find drugs in it, "There is no due process. There are no international standards."

"Our assessment of the Saudi justice system is that it's not fair," she said. "There is no written penal code, there are a few laws that outline crimes, and they are themselves overbroad and so vague that they violate rights in their very wording."

Saudi Arabia has executed 90 people so far this year - almost half on drugs charges. In 2014, 88 people were executed on narcotics charges. Unlike Iran, prisoners there are made to lie face down, in public, their hands tied behind their backs, while an executioner severs their head with a sword.

In May, Saudi authorities placed an advertisement for new executioners. As reported in the "Guardian" newspaper, the eight vacancies were announced on a civil servant job portal and classified as "religious functionaries."

The blatancy of the posting attracted some media attention and a flurry of social media activity, but that was about all. Whiston said that's par for the course for the oil-rich nation.

"Saudi Arabia get a pass for its abuses," she told DW. "In fact, it not only gets a pass, but, ironically, it is part of a coalition to fight extremism."

Whiston said she is equally critical of the international community's apparent lack of interest in what is happening in Iran, and says a nuclear deal is being given priority over any critical examination of the country's domestic record. 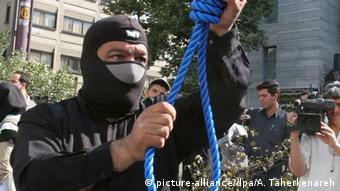 The West has put human rights discussions on the back burner to make a nuclear deal with Iran, activists said

Amiry-Moghaddam added that now would be the moment for Europe and the United States to insist that Iran clean up its human rights record.

"Iran is at the peak of diplomatic relations with the West, but we see no protest from the international community, and that worries me a lot," he said. "Iran is more sensitive than ever to international pressure, because they want sanctions to be lifted, so now the West could have some influence."

Until the end of last year, the United Nations Office on Drugs and Crime (UNODC) operated a program in Iran that was widely criticized by rights groups for contributing to the number of arrests, and by extension, hangings. Some countries - Denmark, Ireland and the UK - even withdraw their financial support.

Although the program has now ended, Amiry-Moghaddam said the impression it left was the wrong one, and that countries such as Germany and France, which contributed funds until the end, should be far more outspoken condemning Iran's flagrant misuse of the justice system.

A spokesman for the Foreign Office in Berlin told DW that Germany was "deeply concerned" about the situation, and would continue, "regardless of the outcome of the current nuclear talks, to call on Iran to uphold its human rights responsibilities."

The spokesman added that Germany and its European partners would take "every possible opportunity" to push for the abolition of the death penalty in Iran, and that together, they had established a policy of sanctions targeting those responsible for human rights abuses.

"This includes Iranian judges and state prosecutors, accused of conducting unconstitutional trials that lead to death sentences," the spokesman said.

But Amiry-Moghaddam of Iran Human Rights said what's needed is loud, unmistakable condemnation of a state-organized strategy that he likens to that used by "Islamic State."

"The aim is to spread fear," he said. "The main difference though is that the executions in Iran are being ignored."

Squalor and death in Egypt's prisons

Thousands of political prisoners are languishing in Egypt's prisons amid allegations of abuse and torture. But now a rising number of deaths is causing even more concern, as Kristen McTighe reports from Cairo. (02.06.2015)

Iranian-American Naghme Abedini has been fighting for her husband's release from an Iranian jail. He is a Christian convert accused of founding "underground churches." Such institutions are gaining popularity in Iran. (20.05.2015)