Burkina Faso lies on the edge of the arid Sahel region.Yet agricultural production has doubled since the 1990s, and is set to grow even more as irrigation practices improve. 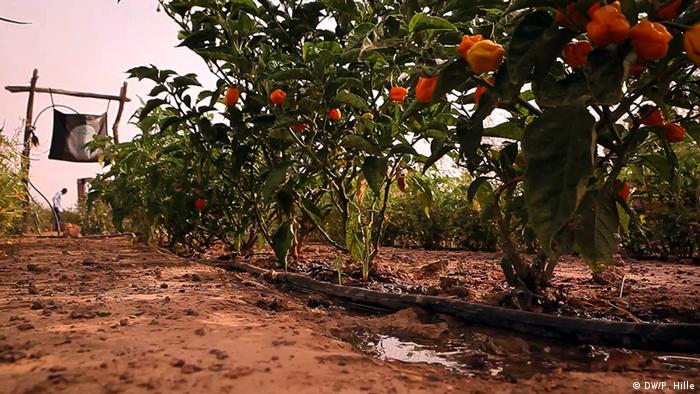 Mando Adaye turns the crank handle four times and the pump motor springs to life. Slowly it brings water from an underground reservoir to the surface. But were Adaye to turn on the tap, no water would flow out of it for his banana or mango trees. Instead water drips slowly on to the ground through pin-sized holes in a black hose lying on the top of the soil.

Adaye wipes the sweat from his brow. He runs an orchard in the heart of Burkina Faso in West Africa. In spring, which is the dry season, temperatures climb to around 35 degrees Celsius (95 degrees Fahrenheit). The Sahel desert is just two hours' drive away. Water is scarce here. Consequently, food is scarce, too. A quarter of the Burkinabe population doesn't have enough to eat. 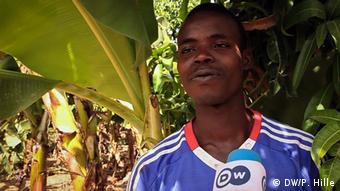 Fruit grower Adaye is working hard to save water

Mando Adaye saves as much water as he can. In the rainy season he collects it in a reservoir. During the dry season he uses piping to transfer the water directly to the trees, so that as little as possible evaporates in the heat of the sun. The water seeps into the ground drop by drop, around a liter of water enters the soil every hour through the tiny holes in the piping. Previously Adaye used buckets to water his trees, but he needed twice as much water as he does now. "I'm satisfied with the drip irrigation," Adaye said. "Everything has become easier. I only have to pump water once, then in theory, I could go to bed."

Even in the dry season there is now almost always enough water to go round. The harvest has improved. Taking a machete, the fruit grower cuts down a bunch of green bananas from a nearby tree. Satisfied, he puts them in his wheelbarrow.

One hundred kilometers (61 miles) to the south, Seydina Oumar Traore is sitting in his office in the agriculture ministry in the capital, Ouagadougou. Irrigation in Burkino Faso is his responsibility. His department financed part of Adaye's irrigation system. The state funded around two-thirds of the purchase price, says Traore. The Burkinabe government will distribute around six million euros ($7.6 million) in aid in 2013 to promote drip irrigation. Traore hopes to turn Burkina Faso into a country in which agricultural produce is a source of national income. Tomatoes and onions are already being exported to neighboring Ghana, Nigeria and Ivory Coast. "If we concentrate on improving drip irrigation technology, I think we can realize our potential," Trarore said. "Then we might even be able to export to the international market." 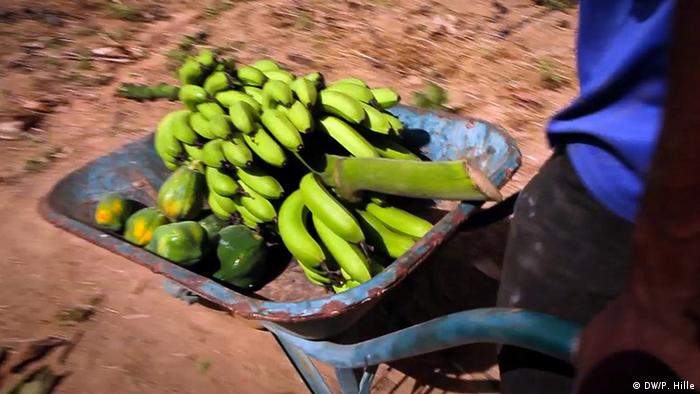 Drip irrigation, rather than an overuse of water, provides an abundance of fruit for Adaye

Only around five percent of Burkina Faso's arable land is irrigated and cultivated. Stephan Neu represents German development bank KfW which is financing irrigation projects in the country. He says the potential for expansion in agriculture is enormous, but doubts whether larger farms are the answer. "Burkina Faso relies on the smallholder," he said. So the goal of becoming a food exporter is a long way off. "Especially with the population growing at more than 3 percent a year and only a limited amount of land available."

Laurent Stravato also has an interest in small scale farming. He is standing in the middle of a plot of land four meters (13 feet) by four meters. Ripe orange-colored paprika glisten between green leaves. This is an agricultural trial site run by IDE, an international non-profit corporation devoted to the distribution of low cost irrigation systems in the developing world. Stravato is their country director for Burkina Faso. He is testing methods specially designed for small-scale farmers. Drip irrigation systems in particular can save a lot of water. 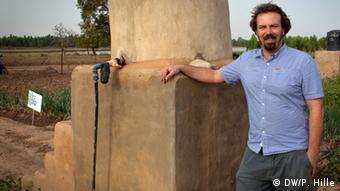 Stravato shows how easy they are to operate. He takes a small pump in his hand and squeezes it four or five times. The water starts to flow. The pump sucks water from a plastic storage sack that hangs from a wooden frame. The water then flows from the sack through a hose that leads to the plot where the paprika are growing. Branching out from the hose and on to the plot are smaller, narrower hoses that have been punctured with holes and it is through these that the water finds its way into the soil, without any loss through evaporation.

"Countries in the Middle East, such as Israel, and Jordan, have already transformed their agriculture with this system," said Stravato. But in the Sahel, drip irrigation, which is almost a minor revolution, is only just getting going.

Stravato is convinced that drip irrigation could boost crop yields in Burkina Faso by a third. The capital outlay for the irrigation system can be recouped within a year. For the equivalent of four euros farmers are able to buy a small pump set comprising a plastic storage bag, tubing and a hand pump. With this it's possible to irrigate a field five meters square. And once the farmer is making a living from his produce, he will then be able to purchase a more elaborate irrigation system, like the one used by Mando Adaye.

Climatologists in Africa face a challenge monitoring the weather because of very few observation networks. Delft University in the Netherlands is helping design a network of cheap weather stations in Africa. (27.02.2013)

Water conflicts are bubbling in many parts of the world, from China and India to the Middle East and southern Africa. A group of former world leaders is calling on the UN to make water a top security concern. (18.09.2012)