Dozens dead in 'drastic' uptick of cholera in Yemen

At least 34 people have died of cholera in just two weeks as aid groups struggle to reach patients. A sanitation workers' strike has compounded the crisis. 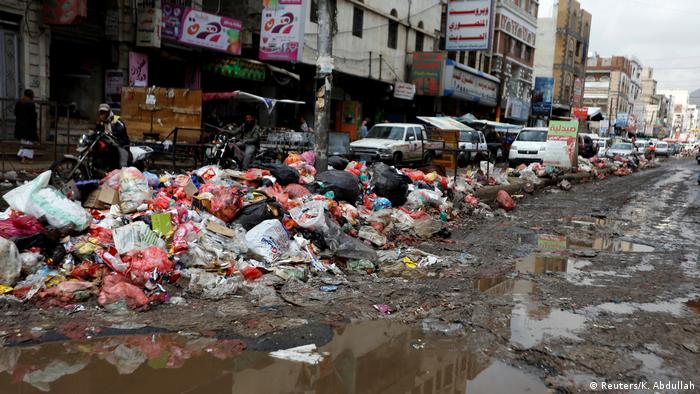 Some 2,000 Yemenis have been stricken with the disease, Doctors without Borders (MSF) said on Tuesday, warning that the situation could soon escalate out of control.

"Humanitarian assistance... needs to be urgently scaled up to limit the spread of the outbreak and anticipate potential other ones," said Shinjiro Murata, head of the MSF mission to Yemen.

The conflict between President Abed Rabbo Mansour Hadi, Houthi rebels, and Islamist groups like al-Qaeda has been raging since 2015. Since turning into a proxy war between regional powers like Saudi Arabia, which backs Hadi, and Iran, which has clandestinely backed the Houthis, it has become more and more difficult for aid organizations to help the desperate civilians - 10,000 of whom have been killed in the war.

Despite the dire circumstances, both Riyadh and Tehran have refused to either step down or negotiate. In a TV interview in March, Saudi Deputy Crown Prince Mohammed bin Salman insisted that the "Houthis and their allies could be rooted out in several days, but the cost would be thousands of dead among our soldiers and losses too high among the Yemeni civilians."

"A long war is in our interest," he added.

The health situation has been exacerbated by a sanitation workers strike over unpaid wages in the capital Sanaa. As a result of the strike and recent heavy rains, the city has been flooded by sewer water.

In Sanaa, the Public Healthy Ministry said it has about 310 suspected cholera cases on its hands.

"There have been 34 cholera-associated deaths and 2,022 cases of acute watery diarrhea in nine governorates, including Sanaa, during the period of April 27 to May 7," the World Health Organization told French news agency AFP.

According to MSF, the outbreak has forced some cholera victims in remote villages to travel dozens of miles in extremely dangerous conditions in search of care.

The world promised Yemen only half the aid it needs. Yet at the same time, arms sales to the warring factions are thriving. What is needed now is an arms embargo, writes Matthias von Hein. (26.04.2017)