Doomsday Clock suggests the end is closer than ever

The metaphorical timing was established in 1947 to warn humankind of how close we are to annihilating the planet with technologies of our own making. It had been set at 11:58 p.m. for the last two years. 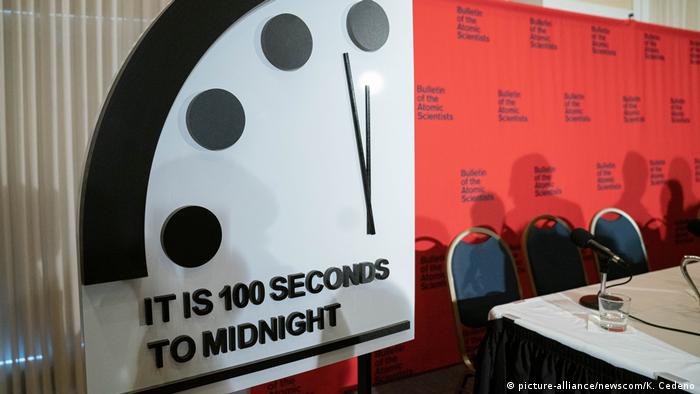 The Doomsday Clock moved forward to 100 seconds to midnight, with threats to humanity leaving us more perilously close to the end than ever before, according to the researchers who set the metaphorical time on Thursday.

The timekeeping device in 2018 was set to exactly 11:58 p.m., primarily because of the threats of climate change and nuclear warfare. These risks have now been deemed more ominous by scientists, who pushed the clock 20 seconds closer to midnight.

The Doomsday Clock was created in 1947 with the intention of raising awareness of the impending dangers posed to humankind. When the clock first began to tick, World War II was still fresh in the mind, as the US and the USSR were about to embark on an arms race that would see the two nations on the brink of war for the better part of four decades.

By the early 1990s and with the Cold War drawing to a close, the Doomsday Clock was set to 17 minutes before midnight. Other significant breakthroughs came in the form of arms reduction treaties being signed.

Burning down the house

From 2007, green issues were no longer ignored, as those responsible for setting the Clock — the Bulletin of the Atomic Scientists — confirmed the risks on its official website. "The Bulletin considered possible catastrophic disruptions from climate change in its hand-setting deliberations for the first time in 2007," it said.

In total, the minute hand has altered 23 times since its creation 73 years ago, with the most recent change in 2018, when it was moved from two and a half minutes to two minutes till midnight.

Conflicts across the globe, in particular in the Middle East, and climate change were cited on Thursday as having the potential to escalate, giving cause for concern among the Bulletin experts.

The United Nations recently warned that the past decade was the hottest on record, with 2019 confirmed as the second-hottest year in history.

There is seething unrest in Iranian society — but the situation cannot be compared to that of the revolution of 41 years ago, says guest contributor Rainer Hermann of the Frankfurter Allgemeine Zeitung. (18.01.2020)

The Cold War escalated when the Soviet Union stationed nuclear-armed SS-20 Saber missile systems in the Eastern bloc in 1977. NATO responded with the Double-Track Decision, which restored the strategic balance of power. (12.12.2019)