Donald Trump willing to be questioned 'under oath' in Russia probe

The US president has said he's "looking forward" to being questioned by special counsel Robert Mueller, who is leading the Russia investigation. Mueller is also looking into whether Trump tried to obstruct the probe. 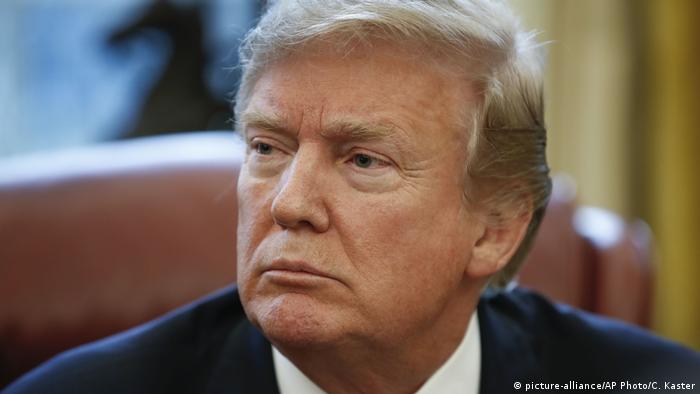 Following reports that special counsel Robert Mueller is seeking to soon interview US President Donald Trump, the president himself said on Wednesday he would be willing to answer questions.

"I'm looking forward to it, actually," Trump, speaking to reporters at the White House, said about a possible interview with Mueller.

"I would do it under oath," he added.

Mueller, who is investigating alleged Russian interference in the 2016 US presidential election, is also examining whether Trump tried to obstruct the Russia probe in his firing of former FBI Director James Comey.

Trump also told reporters that he doesn't remember asking then-acting FBI Director Andrew McCabe last year about who he voted for in the 2016 election.

On Tuesday, the Justice Department confirmed on Tuesday that US Attorney General Jeff Sessions was questioned for several hours by Mueller's team as part of the probe.

The president also told reporters that he was willing to open a pathway to citizenship for immigrants who were brought to the US illegally as children, known as "Dreamers."

A new immigration bill could allow for "Dreamers" to obtain citizenship 10 to 12 years from now.

"We are going to morph into it," Trump said about the citizenship pathway. "It's going to happen, at some point in the future, over a period of 10 to 12 years."

His comments suggest that progress has been made towards negotiating a deal for over 700,000 "Dreamers" who were protected from deportation and allowed to work under an Obama-era Deferred Action for Childhood Arrivals (DACA) program.

Democrats unsuccessfully attempted to tie a solution to the DACA issue into a measure to fund the federal government, but Republicans rejected the effort, prompting a government shutdown that lasted from Saturday until Monday.

Both the US Senate and the House have voted to restore funding to government agencies — for now. Democrats are unhappy about Republican immigration reforms, but agreed to extend funding until early February. (23.01.2018)

Why did the Democrats vote to end the shutdown? Michael Knigge from Washington

Joe Biden lays out foreign policy vision: 'America is back' 9h ago