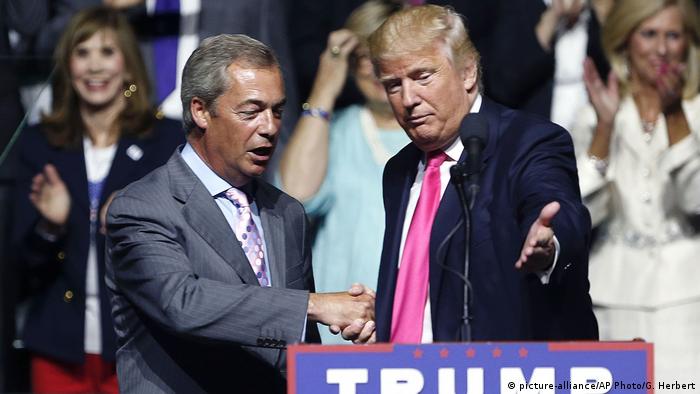 US President Donald Trump urged Britain to speed up its departure from the European Union and advised Brexit Party leader Nigel Farage to team up with Prime Minister Boris Johnson in the upcoming elections, during a 30-minute discussion on Farage's LBC radio show.

Trump said that Britain is being "held back by the European Union" and that the country would be "much better without it," particularly as it would enable the UK "to do much more on trade with the United States."

The president added: "Brussels is very difficult to deal with."

However, Trump cast doubt over the current deal the EU and the UK have in place, saying it limits the possibility of trading between the two English-speaking nations.

"I think he's looking very much at the United States because we can do much more in trade," Trump said. "And we wanna do trade with the UK, and they wanna do trade with us and, to be honest with you, this Brexit deal — certain aspects of the deal -—you can't do it. You can't trade," he said.

"I know Boris wants to be very careful with that because under certain ways we're precluded from signing a trade deal, which would be ridiculous."

In the telephone interview, conducted by long-standing euroskeptic Farage, Trump said he had spoken with Johnson specifically on the topic of leaving the EU, but that he had sympathy for his British counterpart.

"Yes he has (spoken to me), and he also knows how difficult it is — he's in a very difficult position. And I think he's willing to do what no one else would do," he said.

Trump urged Farage to get his Brexit Party behind Johnson in the election campaign, ahead of the British people going to the polls on December 12.

"He's a fantastic man and I think he's the exact right guy for the times," Trump said of Johnson. "And I know that you and him will end up doing something that could be terrific. If you and he get together it's, you know, unstoppable force."

Farage responded by saying he would be "right behind" Johnson, as long as the prime minister dropped the divorce deal he struck with the EU and instead went for a "clean break" Brexit without a deal.

The US president sent a few broadsides in the direction of Labour Party leader Jeremy Corbyn, who is attempting to usurp Johnson from Downing Street.

The US president also firmly denied any interest in taking over the running of the UK's National Health Service.

"I don't even know where that idea started," Trump said of the notion, "with respect to us taking over your health care system. It's so ridiculous, I think Corbyn put that out there."

"But to even think, it was never even mentioned, I never even heard it until I went over to visit with the Queen," he said.

During that trip earlier this year, Trump had fueled speculation that the US would want access to NHS contracts for US corporations by saying that "everything is on the table," when pressed on whether the health service would be involved in trade talks.

Later on Thursday, Corbyn responded to Trump's interview with Farage, tweeting "Donald Trump is trying to interfere in Britain’s election to get his friend Boris Johnson elected. It was Trump who said in June the NHS is "on the table." And he knows if Labour wins US corporations won’t get their hands on it. Our NHS is not for sale."

Meanwhile, nearly a third of the 316,264 voter registration applications made in the last two days have been from citizens under the age of 25, according to government figures.

Young voters were quick to send in excess of 40,000 applications on Tuesday after the snap election was confirmed by parliament. This went up to 59,000 on Wednesday, with both days indicating a marked increase on the 13,109 applications on Monday, and the 4,981 the day before that.