Dogs detect coronavirus fast and reliably — why not use them everywhere? | Europe | News and current affairs from around the continent | DW | 21.10.2020

Finnish researchers say their canine sniffer experts can detect COVID-19 quickly and cheaply but, so far, their skills are hardly used to control the pandemic. Teri Schultz wonders: Who isn't letting the dogs out? 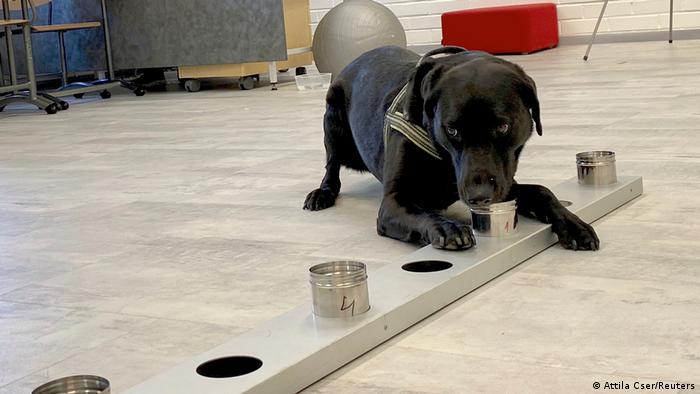 Europe is in a panic over the second wave of COVID-19, with infection rates sky-rocketing and GDP plummeting. Belgium has just announced it will no longer test asymptomatic people, even if they've been in contact with someone who has the disease, because the backlog in processing is overwhelming. Other European countries are also struggling to keep up testing and tracing.

Meanwhile in a small cabin in Helsinki airport, for his preferred payment of a morsel of cat food, rescue dog Kossi needs just a few seconds to tell whether someone has coronavirus.

If it were left to Kossi and his pals, crowds of potential virus carriers could be cleared in a fraction of the time for a fraction of the cost with none of the physical discomfort that accompanies the current nasal swab test based on the polymerase chain reaction (PCR) method.

A dog can sniff a cloth wiped on a wrist or neck and immediately identify if it comes from someone who has contracted the virus as much as five days before any symptoms appear which would lead a person to go into isolation. "A dog could easily save so so, so many lives," University of Helsinki veterinary researcher Anna Hielm-Bjorkman told DW, who says their testing has shown an accuracy level of nearly 100%. 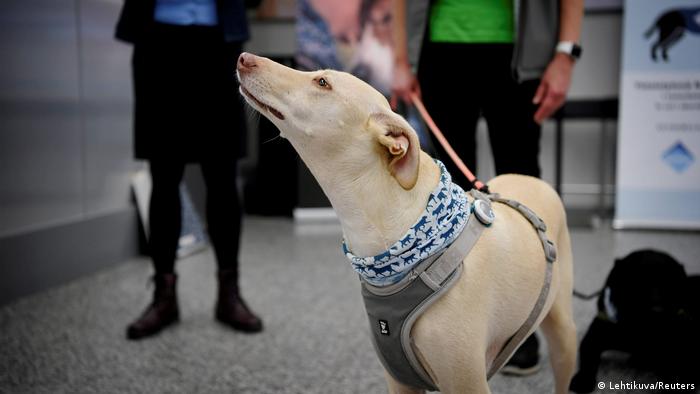 It was originally her idea to see whether Kossi, a talented disease-detection dog, could redirect his skills in sniffing out mold, bedbugs and cancer to detecting the new virus just as it started to spread in Europe. "It took him seven minutes to figure out 'okay, this is what you want me to look out for," Hielm-Bjorkman said. "So that totally blew our minds."

Susanna Paavilainen, the executive director of the Wise Nose scent-detection foundation and the woman who saved Kossi from euthanasia in a Spanish shelter eight years ago, immediately started retraining her dogs to find the coronavirus. 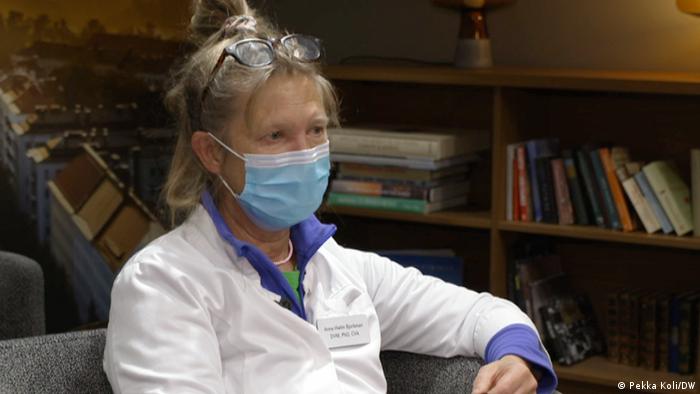 Miina, who used to track a young girl's blood sugar levels by scent, quickly came on board, along with two others already working in disease detection. In all, they hope to train 15 dogs in the first phase.

Hielm-Bjorkman said once they discovered the new capabilities, while the normal academic procedure would be to test, publish and get peer-reviewed, their first instinct was to get the dogs into service. "[Researchers] who are actually publishing," she noted wryly, "are not at the airports."

But for that, they needed permission and ideally, some funding. Vantaa Deputy Mayor Timo Aronkyto, who is also responsible for airport security, saw the benefit straight away. "It took me two minutes," he told DW.

However, his funding options were limited to about $390,000 total for the four-month pilot project aiming to prove that results from the dog tests are at least as accurate as the PCR test. Anyone who tests positive at the voluntary canine site is requested to go to the medical unit for confirmation. 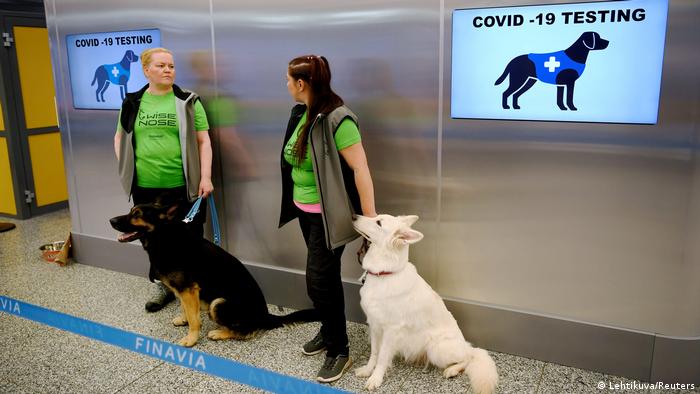 Helsinki Airport uses sniffer dogs to detect the coronavirus, but funding is running out

The interest of Aronkyto, a trained physician, is rooted in both health and wealth. "Our testing at the airport costs more than 1 million [euros] a month at the moment," he said, explaining he expects that to go up to €3 million per month in winter. "These dogs would be much cheaper," he pointed out.

He's optimistic support will grow as data from the current pilot project accumulates, explaining there is already work underway to change Finnish legislation so eventually sniffer dogs would have the same "authority" as customs dogs.

Aronkyto anticipates one animal performing both functions in the near future. He plans to continue this level of funding from his city budget into next year but that doesn't train new dogs nor expand the capacity beyond the four that split shifts currently at the airport, even as infection rates rise. 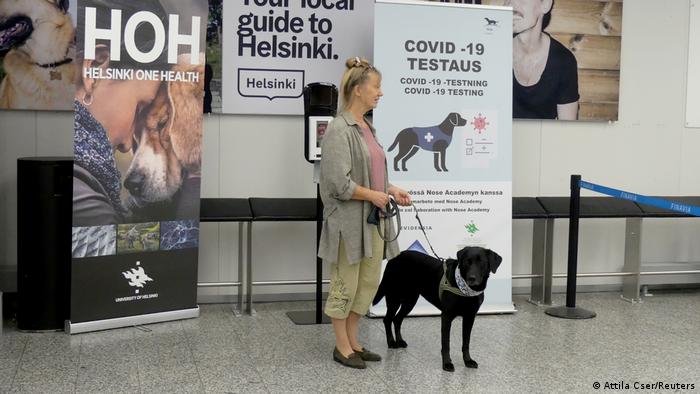 Sniffer dog Miina is waiting for customers at Helsinki Airport

Notably, however, the Finnish government has not signaled it would like to pick up the program itself, despite a huge surge in publicity and, as Hielm-Bjorkman and Paavilainen emphasize, interest from other countries. Travelers have been eager to participate, waiting in line more than an hour at times.

Finnish ambassador in Ramallah, Palestine, Paivi Peltokoski, praised the experience after a recent trip but, apparently, her enthusiasm is not overly contagious.

"If the government would see this already as something that they would believe in," Hielm-Bjorkman said, she could envision training hundreds of dogs, stationing sniffers at concert halls or sports matches or elderly care homes. She adds there's a need for a "paradigm shift" for both medical professionals and the public.

Usually it's doctors telling patients if they're sick, she explained, and "here it's a dog handler."

Little political will on German project

This situation is not limited to Finland. In Germany researchers also  announced promising results with canines detecting COVID-19, but no dogs have been used anywhere so far. And then, says Professor Holger Volk of the University of Veterinary Medicine Hanover, there has been insufficient political will or funding to move the project forward, something he called "very troubling" especially with a resurgent infection rate. 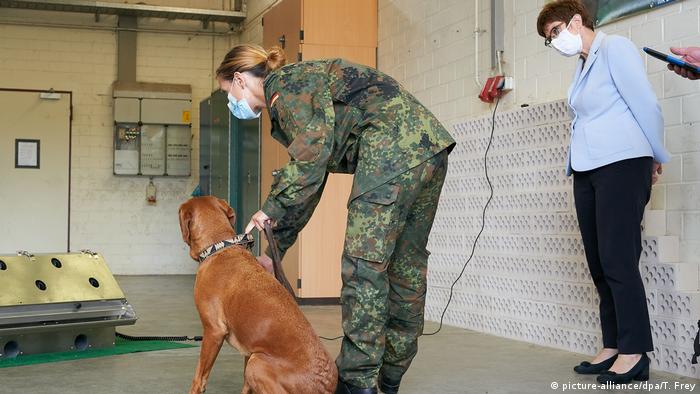 "When we started this whole project, we we did it because we wanted to help to stop the pandemic," Volk told DW. "It's really has been a very frustrating ride. I have had a lot of naysayers in the whole process. If I wasn't a very determined person, having done a lot of research, I would have probably stopped it."

He agrees with Hielm-Bjorkman's assessment that "it's just not in the perception of doctors that dogs are able to do this precise work."

But he also echoes her faith in the vast potential of their discovery.

"If you had a dog who could sniff every day quickly your cohort of workers, for example," he said, "think about the impact. You could continue having a workplace."

Speaking of workplaces, Susanna Paavilainen is starting to think if Finland doesn't want to unleash the dogs' potential at home, she and Kossi might accept one of the many requests from all over the world to provide training. "We can move because Kossi likes warm weather," she says, petting her star sniffer.